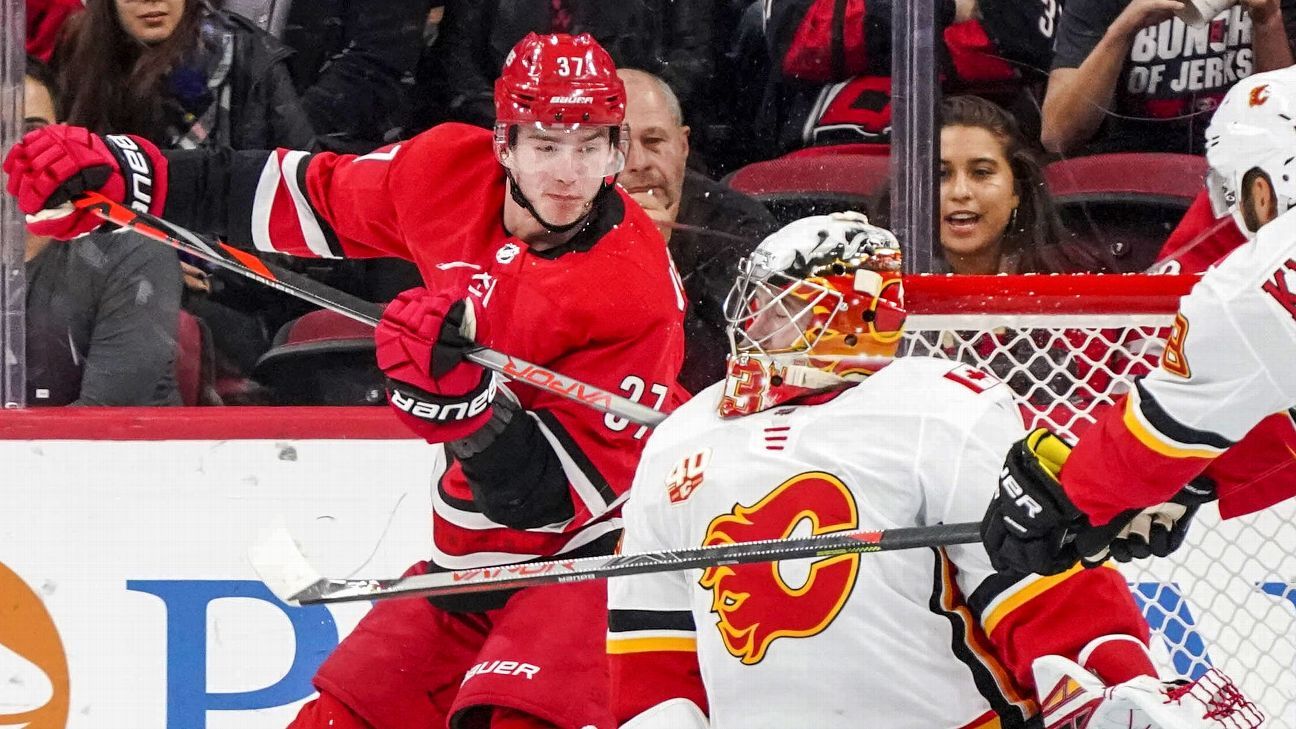 When Carolina Hurricanes second-year right wing Andrei Svechnikov rounded the Calgary net in late October, scooped the puck onto his stick and tucked it home top shelf, he ushered in a new wave of highlight-reel, how’d-he-do-that innovation in NHL goal scoring. Although many had tried the expert-level move, no one had succeeded in the NHL. But since the 19-year-old pulled it off, there have been two other such triumphs.

Of course, it wasn’t the only wow-inducing move we’ve seen this season. But it made us pause and take stock of scoring innovation. How does the move commonly known as “The Michigan” rank among the coolest goals ever scored in the NHL?

We turned to a panel of 13 NHL writers, analysts and editors and asked them to rank their favorite innovative goals of all time. Degree of difficulty and skill, the situation and the creativity involved were all factored into the lists. Iconic goals that were not necessarily scored on an imaginative move — such as Bobby Orr’s famous flying Stanley Cup winner in 1970 — were not included. Those are certainly memorable, but they don’t really fit the criteria here. Goals scored outside the NHL were also tossed out, although many on the list were born in other leagues.

After compiling the list of 10 jaw-dropping tallies (and a few honorable mentions), we turned our attention to the future, looking at four intriguing moves that we could see in an NHL game in the not-so-distant future. Hey, in a league in which players are scooping up pucks lacrosse-style and scoring like it’s nothing and between-the-leg tries have reached near regularity, anything is possible. The talent is so high, and creativity is meeting that elite skill level. We’re all benefiting from the results.

Here are our rankings of the 10 coolest goals ever scored in the NHL, along with what we might see next — with context provided by Greg Wyshynski, Emily Kaplan and Chris Peters.


“The Forsberg” was named after Hall of Famer Peter Forsberg, a move in which a player’s body is going one way while, with one hand on the stick, he/she tucks the puck past the goalie on the far side. He executed it in the shootout of the gold medal game in the 1994 Winter Olympics, earning himself a spot on a Swedish postage stamp. Then he pulled it off in the NHL while with the Flyers in October 2006.

Many NHLers have attempted and perfected the move, but Vladimir Tarasenko‘s version in a playoff game against the Wild in April 2015 is a special one, thanks to his incredible velocity during the sequence. — Wyshynski


Datsyuk might not have originated the flip goal, but he pulled it off in the best league in the world, and no one else has been able to before or since. The Jan. 17, 2010, shootout flip shot was actually first pulled off by former Oilers draft pick Linus Omark, who did it while representing Sweden in international competition.

The move takes a ton of skill, patience and precision — and a wee, little bit of arrogance. But when you’re The Magic Man, that’s all part of the package. Datsyuk was the first shooter in that shootout, in a game in the midst of a revived rivalry between Detroit and Chicago, and he goes and drops that? No fair. — Peters

8. Marek Malik goes between the legs


This goal will forever be epic because it includes an unlikely hero. Malik had zero goals on the 2005-06 season and just 27 career goals in 488 NHL games. But during a 15-round shootout between the Capitals and Rangers on Nov. 26, 2005, it was New York’s defensive defenseman who deked out Washington goalie Olaf Kolzig with a slick, between-the-legs goal. It sent New Yorkers into a frenzy and is regarded as one of the best shootout goals ever. Plus, it played a part in between-the-legs goals becoming almost common. — Kaplan


The greatest athletes make it look easy. Perhaps, then, it was no surprise when Crosby effortlessly batted the puck to himself while it was midair to score against the Canadiens in March 2018. It was the first of three very similar goals that Crosby scored in a 10-game span. — Wyshynski

6. Pavel Bure drops the puck to his skate


Bure was so far ahead of his time in so many ways, but the speed with which he played would dominate in any era, including the current one. The Russian Rocket wowed everyone with this goal against the Bruins in his first game back from one of his many injuries during the 1996-97 season.

Bure hits top speed, blows past Hall of Fame defenseman Ray Bourque and, instead of also blowing past the goalie, freezes Scott Bailey by dropping the puck to his skate before continuing past, kicking it back to his stick and sliding it in. It’s a goal unique to a player of Bure’s speed, and that’s probably why we haven’t seen anything like it since (let’s see it, Connor McDavid). — Peters


Short-handed and from his own blue line, Savard skated toward Edmonton’s zone trying to buy time — and ended up scoring one of the most memorable goals in Chicago Blackhawks history on Feb. 24, 1988. Savard twirled and weaved around half of the Oilers on the ice. Seven-time All-Star defenseman Kevin Lowe was Savard’s final victim as he broke a 3-3 tie with an off-balanced shot against Grant Fuhr. — Kaplan


In Game 1 of the 1992 Final, Jagr scored on one of the greatest individual efforts in playoff history. He intercepted a clearing attempt by Brent Sutter, deked around Dirk Graham, deked around a hapless Sutter, who tried to correct his error, and then around defenseman Frantisek Kucera before backhanding the puck past a diving Sutter — completing his personal nightmare — and past Hall of Famer Ed Belfour.

“Oh, that was probably the greatest goal I’ve ever seen,” Lemieux said after the game. — Wyshynski


This has to be the first goal most people think of when they think of Lemieux. It came in Game 2 of the 1991 Stanley Cup Final, Mario’s first crack at the Cup, and signified all of the things that made him “Le Magnifique.” From the speed with which Lemieux gets through the neutral zone to his incredible stick work to get the puck through Shawn Chambers‘ legs and avoid Jon Casey‘s poke-check, it’s vintage Mario.

The Penguins went on to win their first Stanley Cup that year, with Lemieux earning Conn Smythe honors with 12 points in the final and a highlight for the ages. — Peters


In 1996, Mike Legg defied gravity by scoring a lacrosse-style goal for the University of Michigan. Since then, hockey players across all levels have tried it — some successfully, some not (looking at you, Auston Matthews). It took 23 years for this to finally make it to the NHL. Once Carolina’s Svechnikov executed it against Calgary’s David Rittich in October 2019, the floodgates opened. Svechnikov then did it again (leading some to call it “The Svech”), and Nashville’s Forsberg followed suit soon after.

Goalies everywhere are on notice. The problem is, if executed correctly, this move is nearly impossible to stop. — Kaplan

1. Alex Ovechkin scores “The Goal” on his back


It was Jan. 16, 2006, and the legend of Ovechkin wasn’t even through Chapter 1 yet. He was just a rookie, electrifying a post-lockout NHL, when Ovechkin scored what would henceforth be known as “The Goal” against the Coyotes. He collected the puck in the neutral zone, sped into the attacking zone and attempted a toe-drag in the slot. Instead, his skate toe-picked, and he fell to the ice … while still controlling the puck as he rolled on his back. He then somehow hooked it for a shot that beat goalie Brian Boucher.

Ovechkin would call it “lucky” and “a beautiful goal.” Its greatness was so immediately accepted that fans clamored for the NHL to buy time during that year’s Super Bowl and run the goal as a commercial. Fourteen years later, many other chapters have been written in Ovechkin’s legend, but “The Goal” remains one of its singular moments. — Wyshynski

These goals just missed our top 10, finishing at Nos. 11-13. But they were too good to leave out. Here are our honorable mentions.

Matthew Tkachuk goes between the legs from the hash marks


With less than two seconds left in overtime, Tkachuk saw a juicy rebound, crossed in from the hash marks and performed straight wizardry. He shot the puck between his legs and got enough juice to roof it — all in one swooping motion and while falling on one knee.

Oddly enough, this occurred this season just one game after Svechnikov’s first lacrosse goal. That, of course, was rehearsed; this was improvisation at its finest. — Kaplan


It is hard to innovate these days, but Kucherov’s “no shot” goal is as creative as you’ll find. He has now scored it in a shootout (March 2017), in an All-Star Game (January 2018) and in a regular-season game breakaway (February 2018). He gives the puck just enough momentum to slip under the goalie while faking like he’s going to make another move by going over or in front of the puck. Goalies might be wise to it now, but it is so darn clever. — Peters


The Avalanche forward didn’t have much time to think. In a January 1997 game at the Panthers, Kamensky took a pass from Alexei Gusarov right in front of Panthers goalie John Vanbiesbrouck, but the puck was in his skates. Instinctively, he executed a perfect pirouette, launching into the air as he backhanded the puck between his own legs and into the Florida net. — Wyshynski

THE NEXT GREAT NHL GOAL

What is the next move that will leave you speechless? Our crew picked out four that we’ve seen elsewhere and can’t wait to maybe — just maybe — see soon in an NHL rink.

Between the legs, toss and bat


When you finish a game with six goals and eight assists and your team wins 26-2, you can afford to get a little creative. That’s what Israel’s Eliezer Sherbatov did on a breakaway when he pulled the puck between his skates, flipped it into the air and batted it into the top corner. That takes serious coordination.

This goal would have gotten a lot more attention if it hadn’t occurred in a Division III World Championship game between Israel and Greece. — Kaplan

Off the goalie’s back


Oscar Milton was 17 years old when he scored this creative goal for Almtuna in Sweden’s U20 league. He has all the time in the world behind the net and just shovels the puck up and over the net and off the goalie’s back.

It’s a hard thing to pull off, and I think this might be difficult to see in an NHL game. That said, the proliferation of lacrosse attempts in the top league might cause goalies to cheat a little, so if a player has the time and can keep his stick below the cross bar for the flip, it’d be an instant goal-of-the-year candidate. — Peters


One of the most difficult aspects of goal scoring is trying to control the puck on the ice. If the bad hops don’t get you, then opponents’ sticks, skates and limbs will. So why not take the ice out of the equation? Rob Schremp, one of the foremost goal-scoring trick-shot innovators, lights the way by launching the puck Jai Alai-style at the net. No, it didn’t go in, but don’t be surprised to see an NHL player find success with this nifty move down the road. — Wyshynski


This combines a lacrosse goal with a spin-o-rama, and my, oh my, does it look dazzling when done at full speed. Could this goal ever be pulled off in an NHL game? That’s unclear. Nikita Gusev did it during the KHL All-Star skills competition. — Kaplan