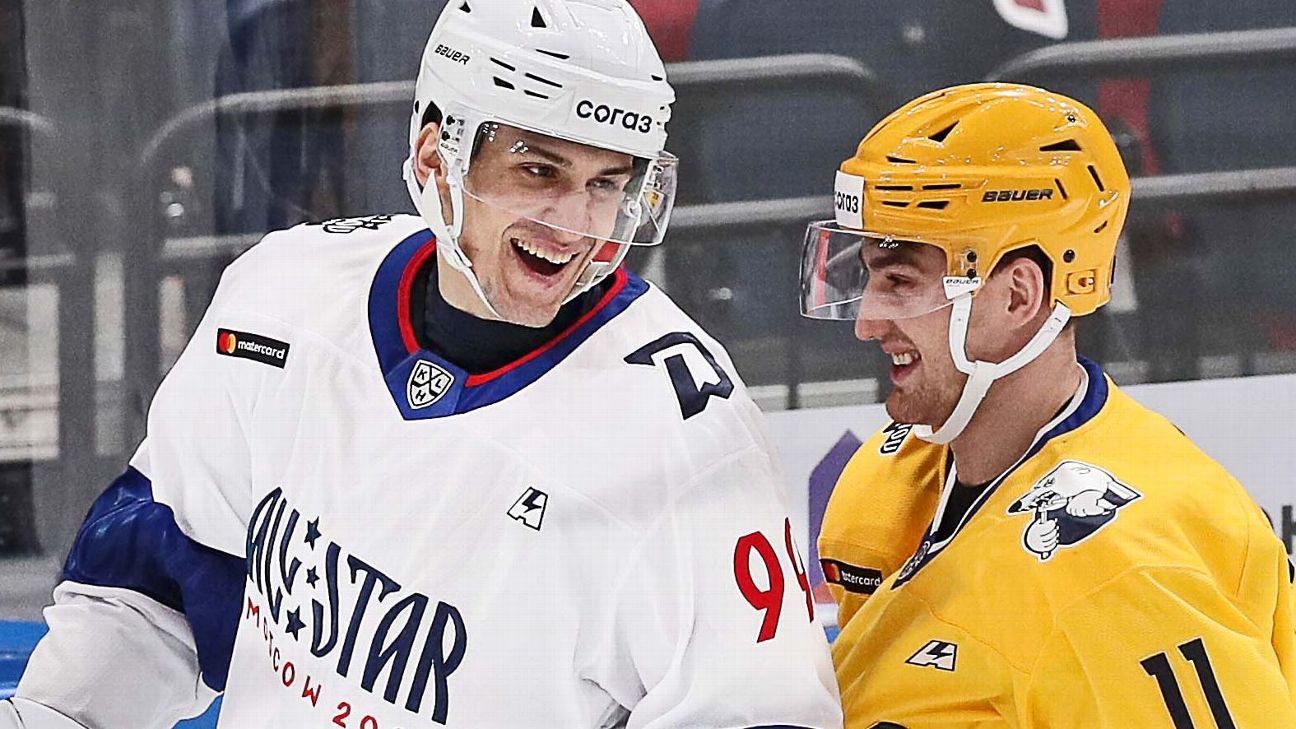 MOSCOW — It’s a Friday night at the hockey rink, and a dozen kids rush to the first row of the 100 level and begin calling for their hero. “Gretz-key! Gretz-key!” they yell, waving pens and asking for autographs.

No. 99 finally walks over. He’s lanky, at 6-foot-4, with long, angular features but a boyish grin. He’s still getting used to fame and adoration. No, it’s not The Great One, but the greatly named one: 23-year-old Vyacheslav (Slava) Gretsky, a forward for HC Dinamo Minsk who has become the Kontinental Hockey League’s biggest cult hero.

Gretsky is just a rookie, adjusting to the speed and physicality of the KHL, the world’s top pro hockey league outside the NHL. He was a minus-3 in his first game, so coaches shaved down his ice time. He played just three shifts, for 3 minutes, 4 seconds, in Game No. 3. After that, he was scratched twice.

Fans didn’t care. By his eighth KHL game (when he had yet to record a point), Gretsky had received 2,992 votes over a two-week span to be named to the KHL all-star game. Only two players (both goalies) received more votes. To fully understand the gravity, consider that Gretsky got more votes than the league’s most talented player, Kirill Kaprizov — who is an A-list celebrity in Russia after scoring the gold-medal-winning goal in the 2018 Olympics.

“At first, I was a little embarrassed by the attention,” Gretsky said through an interpreter. “But I learned that if it is going to happen, I can only make the most of the opportunity.”

Gretsky is the KHL’s answer to John Scott, the journeyman enforcer who was famously voted into the NHL’s All-Star Game in 2016 despite the league’s desperate attempts to block it. By contrast, the KHL has fully embraced and promoted Gretsky. In fact, his own club added fuel to the all-star campaign, sending out tweets suggesting Gretsky and Wayne Gretzky might in fact be relatives, considering that Gretsky was born in the same area as The Great One’s grandfather — with the tweets punctuated with a winking face.

“A month ago, my friend sent me a story about him,” Gretzky told ESPN in January. “And so I read all about him, and I think it’s amazing. As soon as my friend sent it to me, I said, ‘He might be related to me.'”

Gretzky explained that his grandfather Anton immigrated to Chicago from Eastern Europe in the early 20th century. As World War I broke out, Anton was going to join the U.S. Army but was told he’d be treated better if he joined the Canadian Army instead. “So my grandfather went up from Chicago to Winnipeg to join the Canadian Army, because they paid $5 more a month,” Gretzky said. “When he crossed the border, he didn’t know how to spell an S, so he put a Z. So my real spelling is ‘sky.'”

Growing up in Gradno, Belarus, a small city nestled near the Poland and Lithuania borders, Vyacheslav Gretsky’s name was never a big deal. “Maybe it would have been if I lived in Canada or the U.S.,” Gretsky said. “But in my town, it was normal. People never stopped me because of it.”

Gretsky began playing hockey at age 7, a bit later than his peers, after watching Belarus defeat Sweden in the quarterfinals of the 2002 Olympics. Coaches needed a goalie, and Gretsky was interested. “I asked my father about it,” Gretsky said. “My father said, ‘What? You should know where you play. With your name, you should be a forward.'”

The young Gretsky agreed, even though he had no idea who Wayne Gretzky was. That changed when he was 12 and first got access to a computer. Gretsky began researching Gretzky, and burrowed down into YouTube rabbit holes watching highlights. “Then, I understand,” Gretsky said.

He became obsessed with hockey. From a young age, he often took public transportation to get to the rink, equipment and all. He even climbed out of the window of the family’s ground-floor apartment from time to time to sneak off to the rink.

After years playing in the Belarusian Extraleague, Gretsky debuted in the KHL this season. “I wanted to wear No. 12,” he said. “I agreed with the team administrator that I would wear No. 12.” But when he showed up to his locker on the first day of training camp, he saw a No. 99 jersey hanging in his locker. “It’s a big responsibility, to wear that number with my surname,” he said. “I understood it would be a lot of attention, both positive and negative, but I didn’t have another choice.”

The beginning of the season was a struggle, as Gretsky battled with confidence issues and tried to avoid demotion to Minsk’s farm team in the Belarusian Extraleague. His coaches sometimes jokingly call him Wayne. And he’s heard, more than a few times, “How could you play that bad with that last name?” Compounding the issue was outside pressure. Fans began showing up at Minsk games in Gretsky jerseys and with printed photos of Gretsky cut out like masks.

When the Gretsky all-star mania heated up, Kaprizov said in an interview that he thought Minsk’s more productive players, such as Mikhail Grigorenko, were more deserving of a nod. There were no hard feelings; Gretsky felt sheepish about the attention, too. He and Kaprizov later hashed it out over Instagram direct messages and have become quite friendly.

“At first, when the attention came, I was like, ‘No, no, no,'” Gretsky said. “But the team supported me. The GM, my teammates. They said, if the fans voted for you, then you will go.”

After getting the all-star nod, Gretsky scored his first two points (both assists). He had a blast at all-star weekend in Moscow. He dressed up in traditional Belarusian garb and served draniki — traditional Belarusian pancakes — to the goalie in the skills competition and then scored a goal in the game. And of course, there were the fans who swarmed him after for autographs.

“When people asked if I was related to Wayne Gretzky, I previously said no,” Gretsky said. “Now I have doubts about it, and maybe we need to do some genealogy research. At the end of the day, I am not him. I would like to create my own legacy. My life is my own destiny and that is what I can control.”

And if Gretsky needs help navigating life with a famous name, he has a good mentor. The Minsk press officer who accompanies Gretsky on most interviews is named Alex Kovalev.