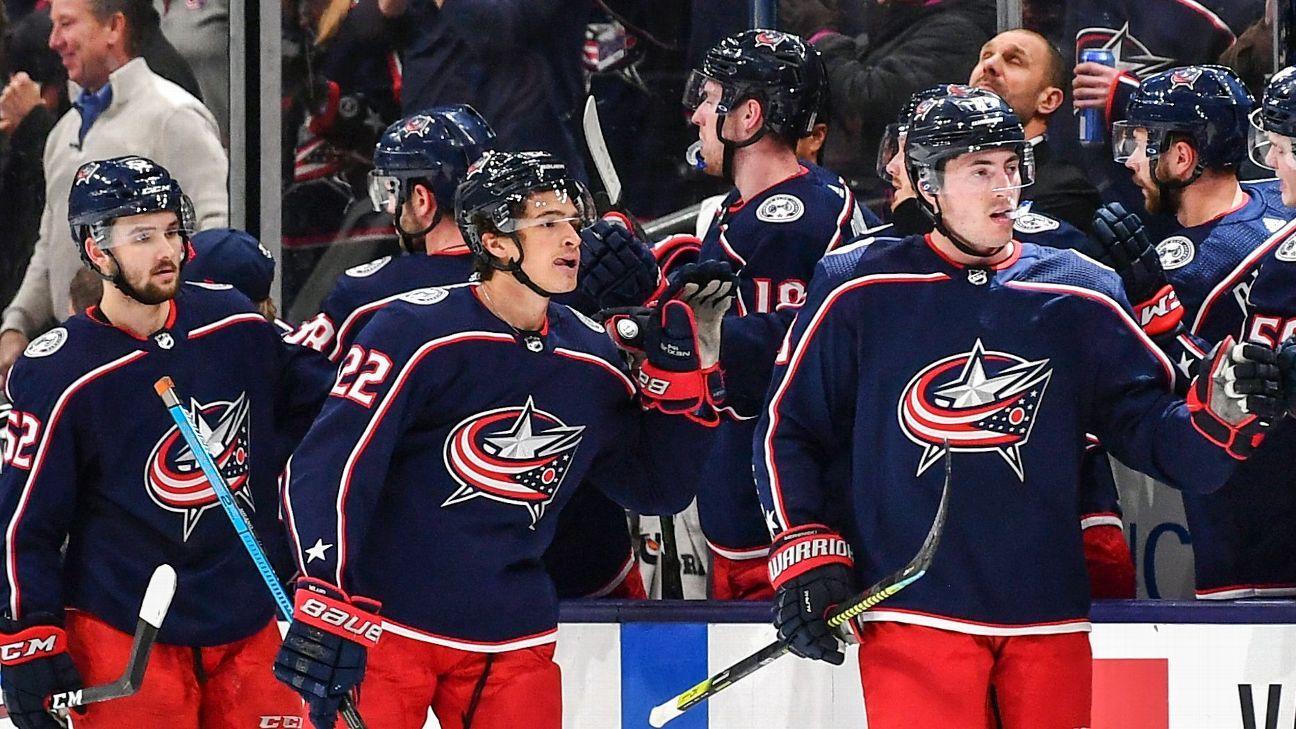 One of the best stories in the NHL is happening in Columbus, where the Blue Jackets keep losing players but keep winning games anyway.

Since coach John Tortorella’s volcanic eruption at the expense of the officials (and his bank account), which happened to coincide with the loss of their starting goalie, the Jackets have had a 13-3-2 stretch. If you extend it to include their most recent 25 games, they’re a remarkable 18-3-4.

Just how have they managed to keep defying the odds and churning out these impressive results? It’s twofold, although the two components are almost inextricably linked.

Note: All data in this piece is courtesy of Natural Stat Trick and Evolving Hockey, and is accurate through Feb. 10 games.

An outstanding debut in the crease

Elvis Merzlikins has been nothing short of electrifying. It was a slow build after a bumpy start that saw him give up seven goals in his debut while starting just six times in the first two months, but since the Jackets handed him the car keys following Joonas Korpisalo‘s injury, he has been every bit as fun as advertised. The postgame celebrations have been well-earned because of his play.

For the year, Merzlikins boasts the following ranks in the most important goalie categories:

As sparkling as those yearlong numbers are, they don’t do proper justice to the run he has been on since taking over as the starter. He has won 12 of those 16 games, shut out the opposing team five times in an eight-game stretch, stopped 95% of the shots he has faced and saved nearly 20 goals above what we’d expect a league-average goalie to have done.

It’s a run reminiscent of Jordan Binnington‘s debut act with the Blues in the second half of last season, and it has propelled Merzlikins into a Calder conversation that seemed as if it was reserved for the two young Western Conference rookie defensemen.

As tends to be the case with any hot goalie over a small sample of games, we need to tread carefully in making any sweeping declarations. That said, he looks every bit the star in the way he plays the position and handles himself between the pipes, and it’s not as if it’s coming out of nowhere. Sure, Merzlikins certainly has never done this at a level like the NHL, and you never know how a goalie will adjust to the increased shooting talent he’ll face when coming from overseas. But he dominated a pro league for years in Switzerland, looked as though he belonged with the world’s best in international competitions and is currently smack dab in his physical prime as he approaches his 26th birthday.

Still, and with all due respect to Merzlikins and his unique performance, this kind of goaltending hardly ever occurs in a vacuum. We find ourselves at a fascinating crossroads in the goalie landscape — both in terms of how we evaluate their performance and with how teams value them. Similar to what’s happening in the NFL with the running back position, the way goalies are being used (and therefore compensated) is changing.

By now, everyone who is paying attention knows that the workhorse netminder who flirts with 70 appearances in a season is a dying breed, as more teams transition toward splitting starts between tandems to exceedingly positive returns.

As things stand, there are only four goalies on pace for north of 60 starts: Carey Price (66), Sergei Bobrovsky (63), Connor Hellebuyck (63) and Frederik Andersen (62). It’s no surprise that the names on the list are the same ones whose teams have heavily invested in them and are trying to squeeze the most bang for their buck (even if it comes at the potential detriment of their own performance).

Teams leery of putting all of their eggs in the basket of one goalie is partly due to the volatility at the position, but also because of how the individual’s success is tied to his environment and the defensive system in front of him.

The Blue Jackets are the prime case study for that idea in action, after they saw their Vezina-caliber goalie walk in free agency. They replaced him with a trio of goalies making a combined $3 million. To say they haven’t missed a beat would be an understatement, since they currently sit behind only the Bruins in terms of goal suppression (and first at 5-on-5). Whereas the Blue Jackets sport the lowest expected goals-against rate in the league, Bobrovsky’s new team in Florida has the seventh-highest rate, which is a big reason behind his unseemly save percentage below .900.

Credit in large part goes to Tortorella’s masterful coaching job. He recognizes that the Blue Jackets have to play a certain way against any number of teams that are objectively more talented offensively. After losing so much fire power up front when Artemi Panarin, Matt Duchene and Ryan Dzingel left in free agency, the Blue Jackets acknowledged that they couldn’t afford to play an open style that involved trading chances. Instead, they strategically tightened their defensive system.

Their underlying shot profile can best be described as Barry Trotz-ian, taking after the method the Islanders’ coach employed in various stops around the league, most notably and most recently with New York. The Blue Jackets are right there with the likes of the Islanders, Bruins and Stars as the stingiest 5-on-5 teams in the league, and that’s by design. Here’s how they rate in the various shot-share metrics:

It’s interesting to see how much better Columbus looks from one category to the next as you increase in level of quality. Their ability to dictate the terms of play by winning that cat-and-mouse game is a big reason why their 5-on-5 expected goal share is 52.2%, which puts them in the neighborhood of teams such as the Avalanche, Leafs, Stars and Capitals as the 11th-best in the league.

The Jackets do it by tactfully picking and choosing what they’ll allow the opposition to have offensively, guiding them further and further to the perimeter by clogging the dangerous areas, such as the middle of the ice and around the net.

They purposefully block shots, not necessarily as a survival tactic as teams who never have the puck do, but because they’re willingly trying to control what their goalie has to face. At 5-on-5, the Blue Jackets block a whopping 27.8% of the attempts opponents take, which is the highest figure in the league. In all situations, they’re second in that metric, sandwiched between the Islanders and Stars.

In terms of the percentage of attempts they give up that are actually considered ‘dangerous’ by definition, the 14.9% they give up at 5-on-5 and 15.6% they give up across all situations are both second best in the NHL. By taking away the cross-seam pass that every team would like to execute, they make life so much easier for their goalies by allowing them to focus on squaring up shooters without fear of being beaten laterally or through the back door.

As good as the shooters are in today’s game, if an NHL goalie can cleanly get set and line up the attempt, they’ll usually stop it. The Blue Jackets do a wonderful job of affording their goalies that luxury.

Whether they can continue that trend and maintain their status remains to be seen following the news of Seth Jones‘ injury and accompanying surgery. Battling through injuries with that “next man up” mentality is hardly a new thing for this Blue Jackets team, which was up there in terms of most meaningful man games lost even before losing Jones. It has gotten to the point where it’s markedly easier to list the players who have been healthy rather than those who have been out, with the list of skaters who haven’t missed at least five games being Pierre-Luc Dubois, Gustav Nyquist, Nick Foligno, Boone Jenner, David Savard and Vladislav Gavrikov.

Although they are getting used to it, life without Jones is an entirely different reality. Before going down, he led the Blue Jackets in usage at even strength, the penalty kill and overall by a significant margin. The only players who play more in the entire league are Thomas Chabot, Roman Josi, Drew Doughty, Kris Letang and Oscar Klefbom. Jones is everything that makes the Blue Jackets effective as a collective group, from his defensive awareness to his skating. His absence leaves an inescapable void, especially in an unforgiving Metropolitan Division that currently contains six of the top 10 teams in point percentage.

The Blue Jackets appear uniquely equipped to try to patch that hole, thanks both to their unheralded blueline depth and the defensive infrastructure that’s already in place. They just have to hope that removing the Seth Jones block from the equation isn’t the one move that ultimately sends the Jenga stack tumbling to the ground.