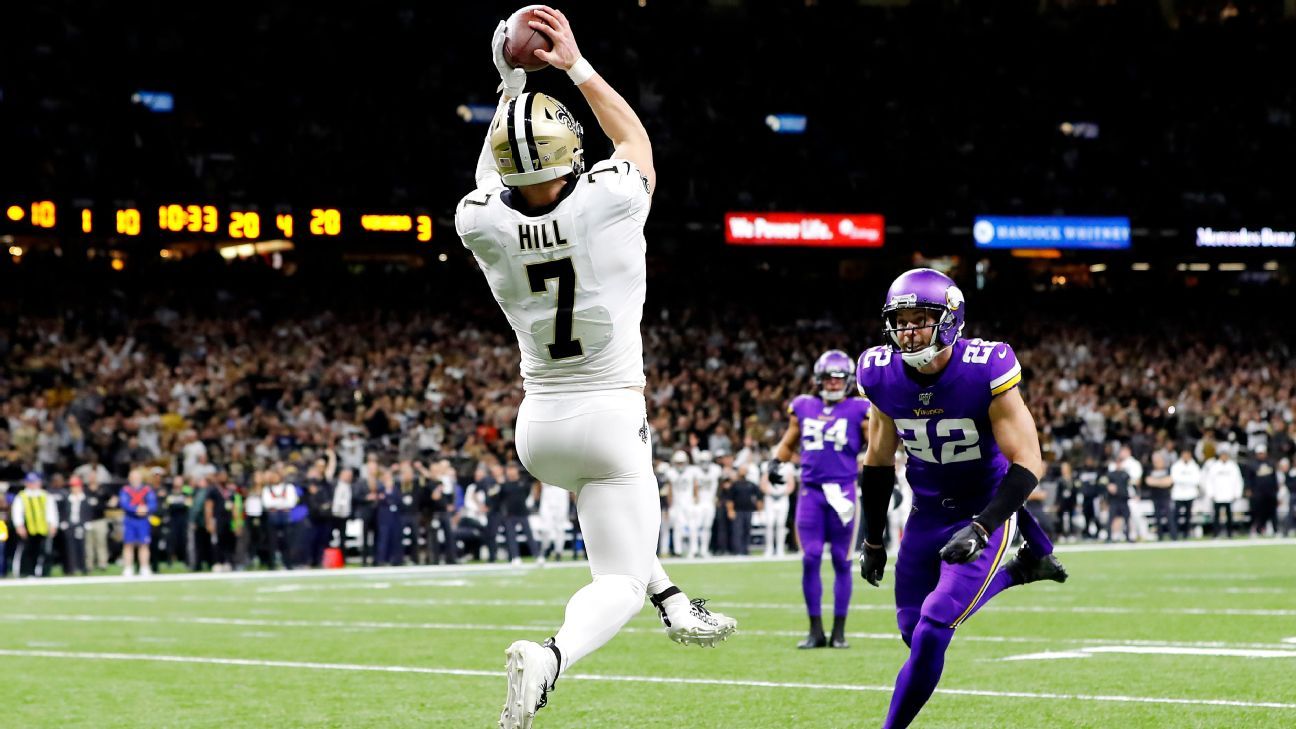 METAIRIE, La. — Count Taysom Hill among those who believe he can be the New Orleans Saints‘ quarterback of the future.

Hill, who has been a revelation while playing quarterback, running back, receiver and tight end in Sean Payton’s offense, recently told The Associated Press’ Rob Maaddi, “I definitely view myself as a franchise quarterback.”

Although Hill said he hopes his future is in New Orleans, he also suggested that he’s willing to go elsewhere in search of his best opportunity as a 29-year-old restricted free agent.

“I think as you look at the other questions — ‘Is it New Orleans? Is it somewhere else?’ — as you go into free agency, this is the time that you start to find out how people view you. And we haven’t gotten into free agency long enough to really know how these guys view me, and we’ll just handle it as it comes,” Hill said on a podcast with Maaddi that was recorded during Super Bowl week. “There’s no denying that I loved my time in New Orleans. I love Coach Payton. I love Pete Carmichael and Joe [Lombardi], the offensive coordinator and quarterbacks coach that I’ve worked with, the special teams. It has been an incredible experience for me. The fan base. I have loved every second of my time there. So do I want to leave? The fact of the matter is no, I don’t. But as you look at free agency, you have to find the right opportunity for you.

“You have to find the situation to take care of your family. You know, I want to play quarterback in this league, and if New Orleans don’t view me that way, well, then I have to leave. So that’s really where we’re at.”

Hill doesn’t seem to be trying to force a timetable on the Saints, though.

When asked about the possibility of 41-year-old Saints QB Drew Brees retiring this offseason, Hill said, “I hope he comes back. I would love to play with him again. He’s become one of my best friends and like a brother to me. And I hope we see him again.”

“This last season has been so much fun for me,” Hill said. “We have such a great locker room. You talk about being able to play with a guy and be a part of Drew Brees and all the records he’s breaking. And then Coach Payton is notorious for always having things to switch it up. That just make it so much fun.”

All indications suggest that Hill could have a future in New Orleans, whether or not Brees decides to retire this offseason.

There have been multiple reports that Payton views Hill as a future franchise QB. If Brees does come back for a 20th season in 2020, the Saints could lose veteran backup Teddy Bridgewater in free agency.

Payton told ESPN’s First Take during Super Bowl week that he thinks it would be “very difficult” and “unrealistic” to keep all three QBs on the roster.

Brees, 41, and Bridgewater, 27, are both unrestricted free agents, though Brees has made it clear that he will either return to the Saints or retire. Bridgewater could also choose to stay in New Orleans, like he did as a free agent last year. But he could find more lucrative offers on the open market after going 5-0 in 2019 as New Orleans’ starter while Brees was sidelined by a thumb injury.

Hill, who went undrafted out of BYU in 2017, is a restricted free agent, which means the Saints can maintain the right to match any offer he might sign elsewhere. If they make a high enough qualifying offer to him, they would also require another team to cough up a first- or second-round draft pick to sign him.

The exact dollar amounts haven’t been set yet, but it should require an offer of at least $4.5 million to require a first-round draft choice and $3.2 million for a second-rounder.

Hill (6-foot-2, 221 pounds) got a late start in the NFL because of a two-year church mission that followed his five-year playing career as a dual-threat QB at BYU, which included four season-ending injuries. He signed with the Green Bay Packers before the Saints claimed him on waivers following cut-down day in 2017.

Over the past three seasons, Hill’s role has grown from special-teams coverage to kickoff returns to all of his offensive roles. He was a standout in New Orleans’ 26-20 wild-card playoff loss to the Minnesota Vikings last month, completing a 50-yard pass, running the ball four times for 50 yards and catching two passes for 25 yards and a touchdown.

He caught a total of seven TD passes in 2019, including the playoffs.

Payton has always insisted that he sees a potential future for Hill at QB, comparing his late-bloomer potential to that of Hall of Famer Steve Young.

Payton has never publicly committed to Bridgewater or Hill as Brees’ successor. But he told First Take, “We feel like that heir apparent potentially is in the building” while stressing that both QBs are “fantastic leaders and teammates.”

“When you watch them play, watch the sideline and the bench, and see the excitement,” Payton said.