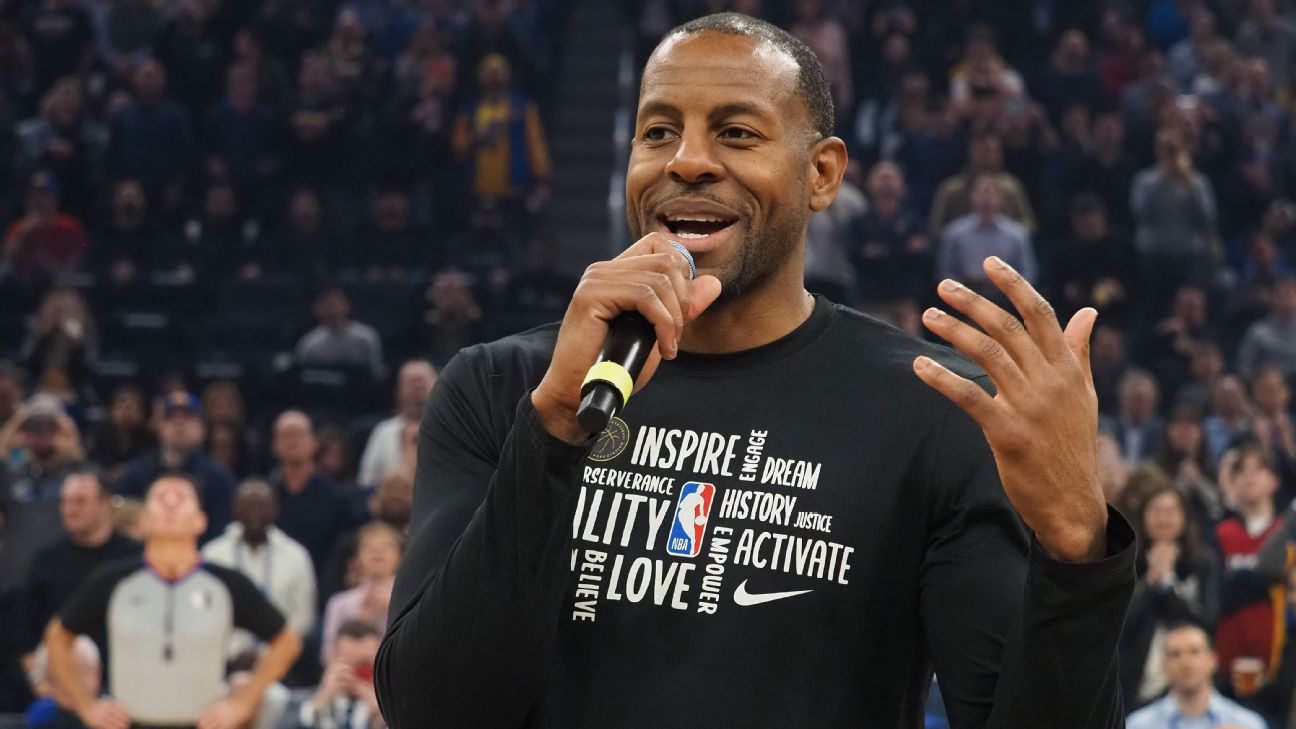 SAN FRANCISCO — For the first time since he was traded away last summer, Andre Iguodala faced off against the Golden State Warriors Monday night at Chase Center. Iguodala, 36, spent six seasons with the Warriors, winning three NBA championships and the 2015 Finals MVP before being dealt to the Memphis Grizzlies last summer to clear cap space.

Now a member of the Miami Heat, Iguodala was given a standing ovation before the start of the game after a video tribute was shown on the scoreboard.

“From the bottom of my heart, I want to thank everybody that supported us, supported me my entire time here,” Iguodala said during a brief speech to the crowd before tipoff. “It definitely feels like home every time. I just left, but it feels like home. Really appreciate you guys and appreciate you being loyal Bay Area fans. My brothers will be back in action, full squad next year, to wreak havoc on the league for 80 games. Love y’all.”

“Obviously, it’s a special night for Dub Nation,” Thompson said. “We’ve got one of the greatest Warriors in the history of the organization back. We call him the Swiss Army knife. One of my favorite teammates of all time. He made me, Steph [Curry], Draymond [Green] and [Kevon] Looney‘s job much easier, as well as Coach [Steve] Kerr and all the coaching staff. So we’re indebted to this man for what he gave us. And it’s good to have you back, Dre. And I can’t wait to see your jersey in the rafters one of these days, bro.”

The reason Thompson spoke is because cameras caught him losing a best two-out-of-three rock, paper, scissors matchup to Curry right before the ceremony began.

Earlier in the day, Green smiled when asked what it would be like to face Iguodala in a game after so many years as teammates.

When asked if it would happen in the first quarter, Green said, “As soon as I get a chance.”

Green, who has a history of ejections in his career, joked that he wasn’t worried about leaving the game early.

Iguodala, who gave Kerr a hug after entering Monday’s contest for the first time, smiled as he spoke to reporters before the game, as a large picture of him riding a float in a championship parade was displayed behind him. He said he hadn’t had time to process his legacy, but understood last summer that a trade was brewing.

“I had a [Tony] Romo moment,” Iguodala said. “I sniffed it out before it happened. I’ve just been around the game for awhile. You kinda see how things are played. You see how a domino effect can happen.”

Iguodala was asked if he felt other players would follow in his path in finding ways to play for a team they wanted, after being traded somewhere they didn’t want to be. Iguodala made it clear he didn’t want to play in Memphis and waited for a deal to come to fruition, despite taking heat from a few of the Grizzlies’ young players in recent weeks on social media. Iguodala brushed off the criticism and is confident he has found a nice place to resume his career in Miami.

“I think everybody’s situation is different,” Iguodala said. “You have to assess all the moving parts of everyone’s individual situations. You gotta know how you stand with the organization. You are trying to work with them more than anything. That’s what I was trying to do. My intentions were never to try to keep from playing with a certain set of basketball players because I think that can be miscommunicated throughout the process. Having an agreement with the team and figure out what is the best move for both parties and both parties are satisfied in the end.”

Kerr was happy to see one of his favorite former players back on the floor.

“I’ve said this before, I’ve never been around a smarter basketball player and I’ve been around a lot of smart players,” Kerr said. “What makes him really unique is his brain, his combination of his fundamental basis with the athleticism. He is not as athletic as he was six, seven years ago, but there is only one other guy I think of when I think of that combination of the fundamental sound, constant nature of his game with the athletic ability as well, and that’s Scottie Pippen.”