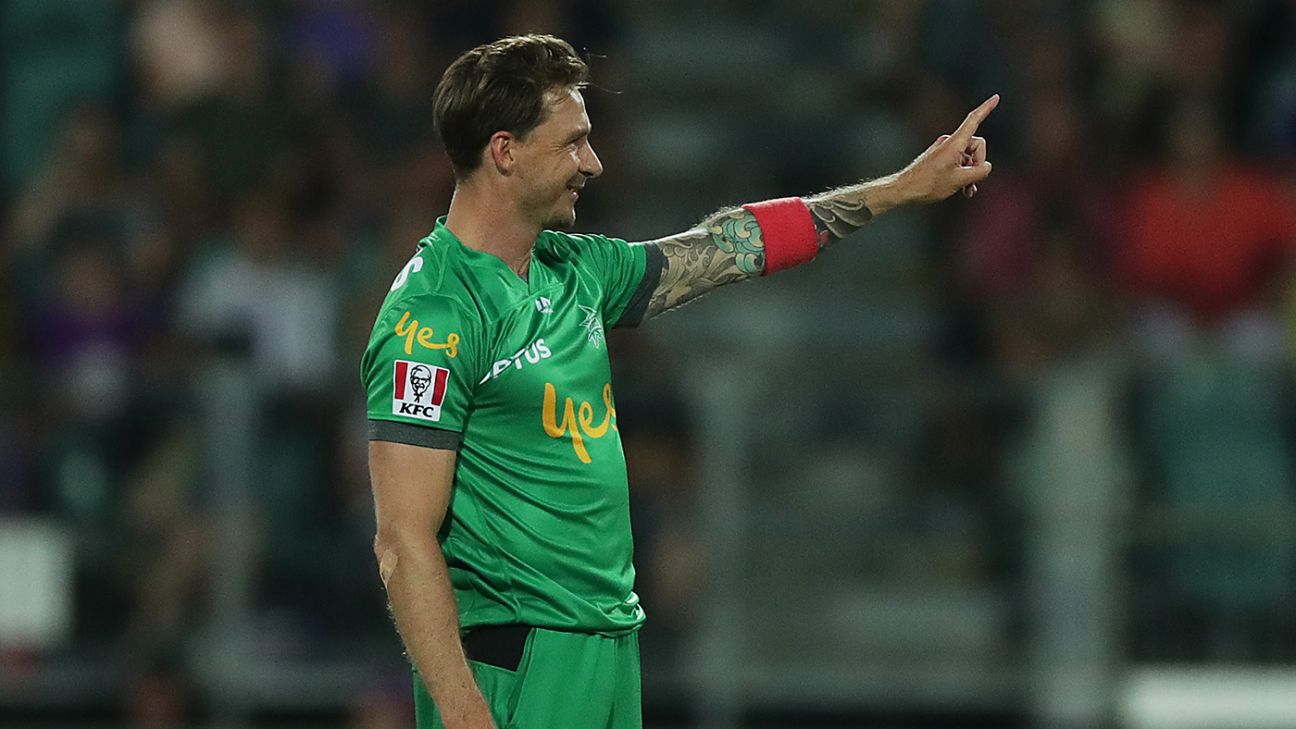 Dale Steyn is likely to call time on his international career after this year’s T20 World Cup but remains committed to making himself available for South Africa in white-ball cricket until then.

Steyn, who retired from Tests in August last year and has not played for the national team in 11 months, will make his return with the upcoming T20I series against England, where he hopes to stake a claim for the T20 World Cup.

Asked if he would consider prolonging his limited-overs’ run until the 2021 edition of the competition, Steyn was hesitant, once he realised the competitions run in successive years.

“Is there another T20 World Cup? Next year? Wow, that’s short-lived. So if we win it, we only win for a year,” Steyn said in East London. “This one would be a nice one to go to and then finish off and reassess after the end of this year and then I will kind of figure out what I want to do.”

For now, the only thing Steyn wants to do is get on the park after missing out on South Africa’s last T20I series, against India last September when the selectors deemed him unfit despite his own declaration of readiness. “I love playing cricket. I wake up every day and I can’t see myself doing anything else right now. I am just putting my hand up and saying I’m available, pick me, don’t pick me and then we’ll see how it goes to the World Cup.

“As long as that drive is there to still play at the highest level, and get batters out and fox them and outsmart them and all that kind of stuff, if I can do that, I am going to continue to do that. And then once I can’t do that anymore, well once I decide that I don’t want to do it anymore, then I’ll be done.”

Recent evidence, in the Mzansi Super League and the Big Bash League, suggests that Steyn still has what it takes to get the better of some of the world’s best batsmen. He was the third-highest wicket-taker in the MSL where he counted AB de Villiers, Dean Elgar and Alex Hales among his 15 victims and took five wickets at 16.20 in the BBL. Notably, Steyn did not get all his wickets with pace alone and was playing with cutters and slower balls, especially in the MSL.

“I decided to play a braver brand of cricket,” Steyn said. “I tried one or two different things that I wouldn’t necessarily do and I thought I would use that as a nice time to experiment and it worked out quite nicely. With Test cricket, it’s very important that you are bowling at high speed but T20 cricket is a great way to be versatile. If you want to bowl 145kph, guys need to know that it’s there, a 90-plus-miles-an-hour bouncer, yorker, whatever it is but you can also change it up and then it makes that 90-mile-an-hour bouncer so much more effective. If you are just constantly doing the same thing, good batters can adjust.”

It’s that kind of wisdom, gained through experience, which Steyn hopes to pass on to a young South Africa pack in the next few weeks. In Kagiso Rabada’s absence, Steyn will bowl alongside Lungi Ngidi, who has also been working on pace off the ball, Andile Phehlukwayo and Sisanda Magala, who are death-bowling specialists and Beuran Hendricks, who adds variation to the attack with his left-arm seam.

South Africa are looking at all of them as potential World Cup participants and Steyn, while still seeing himself as a strike bowler, wants to be their mentor. “I want to kind of orchestrate that bowling line-up a little bit. I want to be able to guide them,” he said. “I want to stand at mid-off and really say, ‘look what are you thinking, what ball are you going to bowl’ and hopefully they can learn and get better every game while I’m there. My job is to make sure guys are making the right decisions on the field. That’s what I want to achieve out of this.”

Those are the words of a man whose mind is on legacy, which suggests that Steyn has already switched perspective. He is no longer a player interested in only his own performances or the team’s success; he is now a player with the end in sight, interested in ensuring there is longevity in the system he is part of. It may even suggest Steyn sees a future in coaching, although he acknowledged he would need to learn the ropes first.

“If I wanted to do anything in the coaching world, I would probably need to upskill myself” he said. “It’s very easy to say take a player, a world-class player out of the system of playing and just push him into a coaching role but coaching is a whole other thing. It’s a skill. I’ll probably have to take a little bit of time to spend some time with people that can teach me how to coach.”

But that doesn’t mean Steyn is ready to dive into a post-playing career as a coach just yet. While he didn’t “want to tell you right now,” what he may have up his sleeve post the T20 World Cup, he dropped a hint that it has nothing to do with cricket at all. “A good friend of mine has started a business and he really specialises in players that are retired athletes and we’ve had some great conversations about other players he has had in the football world and what they are doing and where they are going. It’s exciting, some of the things that are lined up. And it doesn’t have anything to do with commentary or coaching which is quite nice.”

Peter Sagan: Tour de France great to retire from World Tour at the end of 2023
Grand theft scooter: Francona’s ride gets swiped
A’s reportedly reach one-year deal with Aguilar
‘You only fight him because you have to’: Why nobody wants to get into the ring with light heavyweight champion Artur Beterbiev
Longtime Final Four broadcaster Packer dies at 82