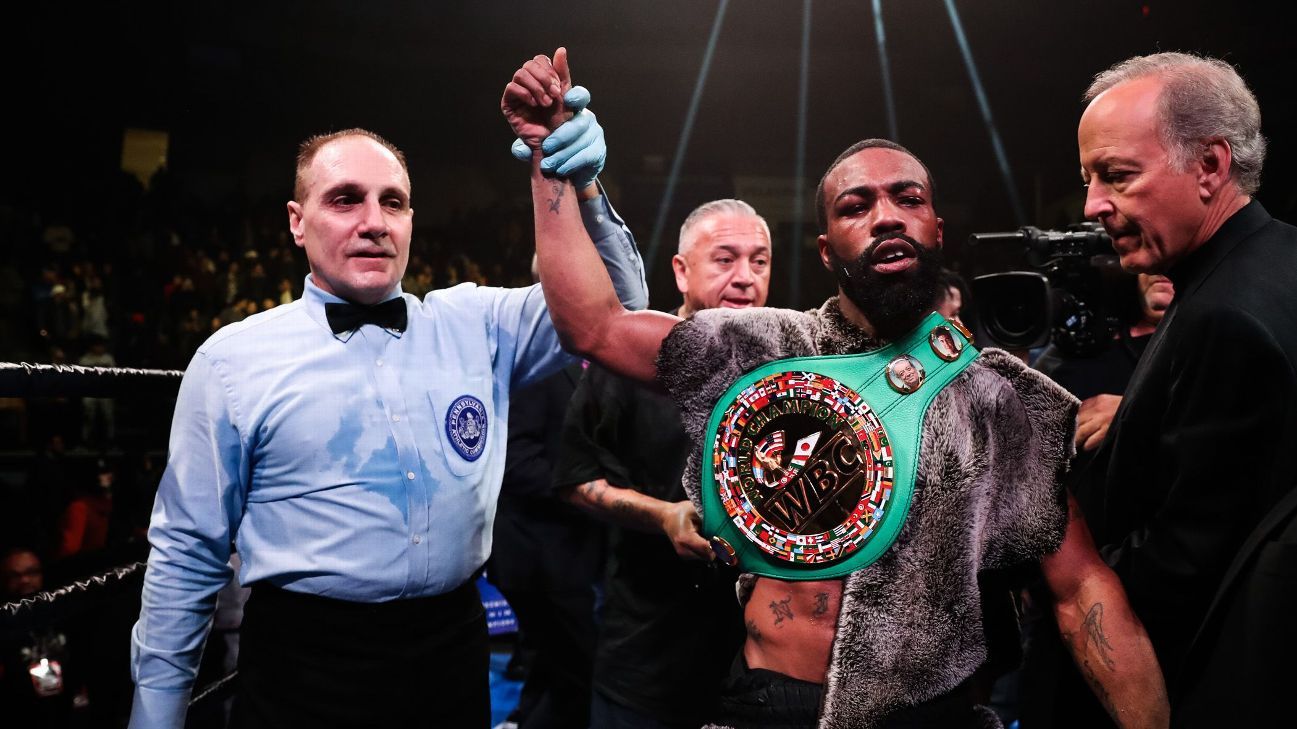 Will Gary Russell Jr. ever get a major fight?

He did face Vasiliy Lomachenko in 2014 for a vacant featherweight world title, but that wasn’t a big fight then. In fact, it was on a Showtime undercard, where Russell took his only professional loss by clear decision.

In 2015, Russell won a featherweight belt and has defended it five times (including against three pretty soft touches), but his fighting schedule has been sporadic, to say the least. He has boxed just once in each calendar year from 2015 to 2019.

Russell can’t seem to make up his mind as to why. At times, he’ll say it is because he cannot get a big name to face him. Then he’ll say he’s OK with the schedule because boxing is a business to him and the light schedule helps him preserve his body.

Whatever the reason, Russell, a 2008 U.S. Olympian from Capitol Heights, Maryland, is now 31 and has been a pro since early 2009. He is an outstanding talent who can do it all in the ring — but that won’t last forever. He is fast with his hands and feet. He has great skills. He has experience. His defense is excellent. He has solid power. If fought more often there is no doubt in my mind that he would be considered one of the top 10 pound-for-pound fighters in the world.

Russell (31-1, 18 KOs) once again showed his talents as he came off a nine-month layoff and made defense No. 5 against mandatory challenger “King Tug” Tugstsogt Nyambayar on Saturday night in Allentown, Pennsylvania. Russell turned in yet another quality performance against a worthy opponent in the 27-year-old Nyambayar, who won a silver medal for Mongolia at the 2012 Olympic Games in London, but did not turn pro until 2015.

But what now for Russell? Will he even fight again in 2020? I have a hunch that, yes, we will see him a second time this year. At least I hope we do. He is too talented to waste his career away by fighting so infrequently. He is a known gym rat and I never understood why a guy would spend all that time training and not put it to use in a fight and get paid seven figures for it.

Now there is some truth to the notion that getting a big name to fight him has been problematic, but even if Russell can’t get the biggest fights, he could still fight the best guy willing to face him and make a lot of money. He wants a rematch with now-unified lightweight champion Lomachenko, but Loma has other plans, so that is not happening any time soon, if ever, even though Russell said after Saturday’s fight that he’s willing to move up two divisions to lightweight for the right fight.

His problem is that there are very few big fights that could possibly be made for him at featherweight, junior lightweight or lightweight.

At featherweight there is literally nothing of note for him. The other biggest names in the division, titleholders Josh Warrington and Shakur Stevenson, are probably going to meet later this year. The rest of the top 10 either have other plans or are fights few would care about.

If Russell moves up to junior lightweight there is also very little of significance for him or in terms of makeable fights. He wants to face titlist Leo Santa Cruz, who also still holds a featherweight belt. That’s a major fight and is doable since they are both with Premier Boxing Champions, but according to sources, Santa Cruz has balked at the fight multiple times. Also, Santa Cruz more likely will go for an even bigger fight against lightweight titlist Gervonta Davis, which takes another potential opponent away from Russell.

If Russell went to lightweight, a fight with Davis would be huge. Russell is from the Washington, D.C., area. Davis is from Baltimore. It would sell out any arena in the region and would receive ample hype.

But if Davis faces Santa Cruz, which is no slam dunk considering the legal peril Davis is in due to a recent alleged domestic violence charge against him, it leaves Russell out of the mix there. It means Russell would once again be a man with all the talent in the world but nobody of stature to put it to good use against.

Brook back on track

It was just what the doctor ordered for former welterweight world titlist Kell Brook, who returned from a 14-month layoff to stop the very game Mark DeLuca in the seventh round of a junior middleweight bout on Saturday in Brook’s hometown of Sheffield, England.

The question going into the bout was what did Brook have left after major injuries and layoffs since 2016? As it turned out, Brook looked pretty good, all things considered. He was in excellent condition and had a spring in his step. Yes, it took him a few rounds to get warmed up against DeLuca, but DeLuca was the perfect opponent for him since he was not in Brook’s league in terms of skill but displayed a fighting spirit that made Brook work for the victory.

Brook (39-2, 27 KOs), 33, dropped DeLuca (24-2, 13 KOs), 31, a former Marine from Whitman, Massachusetts, in the third round and appeared to break his nose as heavy blood began to flow. He floored him again with a nasty left hand on the chin for another knockdown in the seventh round and referee Phil Edwards appropriately stopped the fight.

It was the kind of back-in-the-groove win Brook needed to show that he’s not done yet while also setting himself up for something much bigger.

The next step: For years, the big fight for Brook has been a grudge match against countryman Amir Khan. There have been offers and negotiations multiple times between the camps but for one reason or another it has never been made. At this point, it seems unlikely to happen, and even if it does it is now well past its sell-by date. But at ringside Saturday was another of Brook’s countrymen, former junior middleweight titlist Liam Smith. They know each other well from sparring and have been friendly for years and a fight between them makes a lot of sense for both. Smith was there with an eye on Brook as a future opponent and Brook welcomed the fight.

“I don’t shy away from any fighter,” Brook said. “I have a lot of respect for Liam Smith. He boxed a stablemate of mine in Liam Williams. I’ve sparred him and if those spars are anything to go by, the fight would be amazing. I know he wants the fight. We’ll sit down with [Matchroom Boxing promoter] Eddie [Hearn]. I love the Smith family, but once we get in there it’s business. I want to get straight back in the gym. I want to be fighting again in 10 or 12 weeks.”

On Monday, Smith posted a poll on Twitter asking fans if they wanted to see the fight. With more than 12,000 votes cast, it was running 84-16 in favor of the fight. Add one more vote from me as somebody who is interested.

Mendez, 23, of Puerto Rico, retained his 105-pound belt for the second time in the main event of the “WBO Champions Tournament.” Mendez was dominating until referee Hector Afu stopped it at 1 minute, 28 seconds as Mendez was battering Mendoza, who had a cut over his right eye and swelling on his forehead, with combinations. Mendoza, 40, of Colombia, lost his second strawweight world title shot having been stopped in the eighth round by then-titlist Jose Argumedo in 2017. Mendez likely will next face Chinese mandatory challenger Jing Xiang (17-4-2, 3 KOs).

Dalakian, 32, of Ukraine, retained his 112-pound belt for the fourth time with all four defenses coming in Kiev. Dalakian, who was quicker and far more skillful, boxed and moved and also landed a few powerful right hands. Perez, 25, of Venezuela, was aggressive and forced Dalakian to hold here and there, but he was quite ineffective with his punches and had a hard time dealing with Dalakian’s jab.

Holyfield, 22, of Houston, the son of heavyweight legend Evander Holyfield (who was ringside), turned pro in November and blew out his third opponent in a row in getting rid of overmatched Nero, 32, of Norman, Oklahoma, in 82 seconds. Holyfield scored three knockdowns, first a left hook to the body, then a right hand upstairs and finally from an onslaught of shots that caused referee Frank Gentile to wave off the fight as he falling to the mat.

In August, Yarde, 28, of England, got a mandatory title shot against Sergey Kovalev and though he had his moments, lost by 11th-round knockout in Kovalev’s hometown of Chelyabinsk, Russia. Yarde made a very low-key comeback against Ramirez, 35, a Colombia native fighting out of Spain, in a scheduled six-rounder. Despite Ramirez’s horrendous record he had only been stopped four times in all those losses until Yarde made it No. 5. Yarde took the fight on short notice because he thinks he has a chance to be involved in a WBO-mandated title eliminator and needed to be coming off a win to qualify, hence the hastily-arranged soft-touch bout.