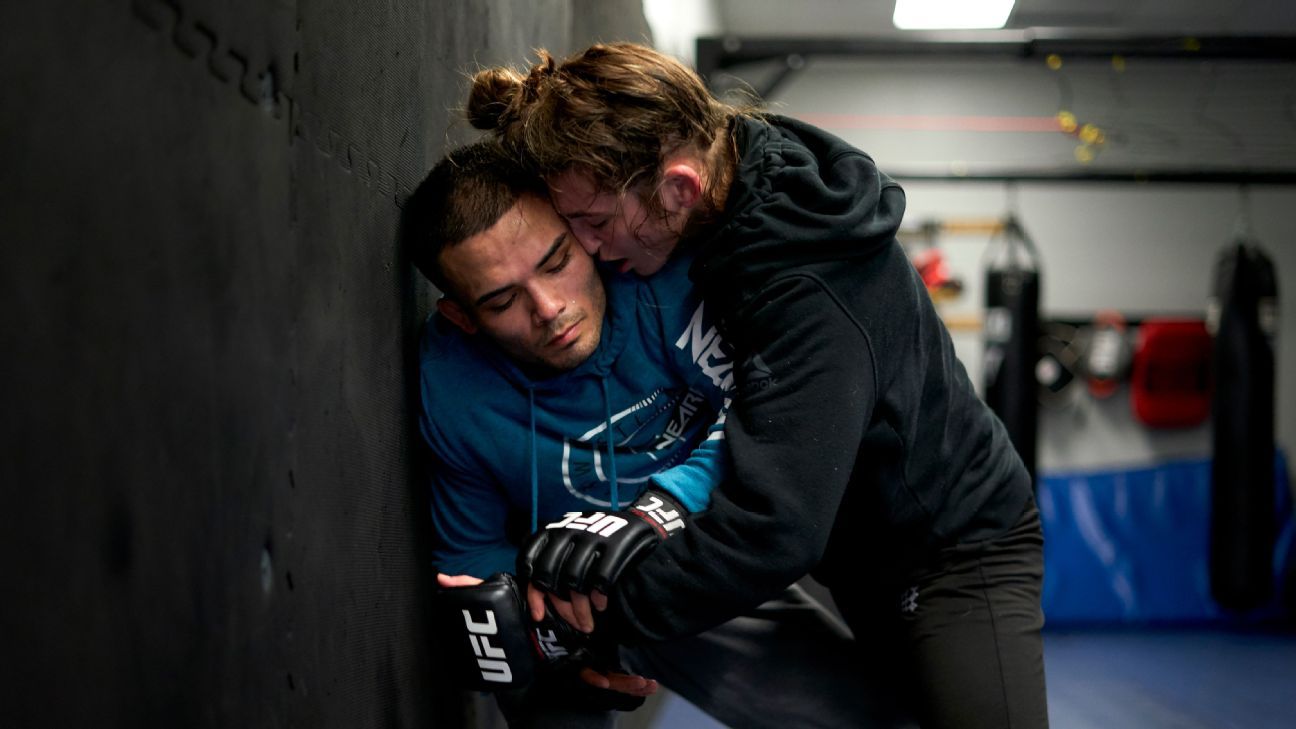 Piloting her Ford Explorer with her husband, Mark De La Rosa, seated in the passenger seat and her daughter, Zaylyn Woods, in the back, Montana tries to pry the day’s details out of her third-grader.

The math test? Pretty good! That English test? Aced it. Then the conversation turns to Zaylyn’s next big test.

“You gonna choke someone out this weekend, Z?” Montana asks.

“That’s her specialty,” Montana says proudly. “Just like her mama.”

That’s when you remember that both front-seat occupants are professional fighters, the only married couple ever signed to UFC contracts at the same time. And that the 9-year-old is the Texas state champion wrestler (in the open division, which is almost entirely boys). And that all three of them could easily drop you at a moment’s notice.

Mark and Montana, both 25, are preparing to fight on the same card at Saturday’s UFC Fight Night in Rio Rancho, New Mexico. Mark (aka “The Bumblebee”) is facing Raulian Paiva at 125 pounds. Montana, who landed a UFC contract after an impressive showing on the TV series “The Ultimate Fighter,” takes on Mara Romero Borella in the women’s flyweight division.

They’re young, hungry and determined, and both are looking in from outside the top 10 in their respective divisions, every fight representing a chance to move up that ladder. They each have to lock in on a professional fight at the sport’s highest level — on the same day. But they’re also parents who must balance intense training with handling the routines of child rearing. And on this late-January day, Zaylyn is preparing for a Brazilian jiu-jitsu tournament, the American Grappling Federation’s 2020 Dallas Winter Classic.

This life is all they’ve known together. Mark and Montana met at a gym six years ago, when Zaylyn, Montana’s daughter, was 3. They got married two years ago. While a couple fighting on the same card is a first for the UFC, it’s not new ground for them. Mark and Montana made their professional MMA debut together on the same card in Midland, Texas, in 2014. In another relationship milestone, “we both won by rear naked choke, remember?” Montana nudges Mark.

The family business is fighting, and all’s fair in love and cage fighting. Hence the unusual after-school conversation about proudly choking strangers. (Zaylyn would win both events she entered in the Dallas tournament — including, yes, one semifinal by armbar.)

Turns out, they are a pretty normal family. They just aren’t an ordinary one. Here’s how the De La Rosas grapple with it all.

Montana got pregnant with Zaylyn in high school and had to forgo a chance to wrestle at Oklahoma City University, which won four national championships from 2009 to 2012. Now Zaylyn is a champion wrestler with a bright future. “She hates to lose,” says Justin Burg, her wrestling coach. “They all have that in common. I think Zaylyn is gonna be somebody you will see on the national news, whether it be in the Olympics or in the UFC one day. That girl is very athletic. Very gifted. And she’s got good parents, good genes — and good training.”

There’s not much room for freelancing in the family’s schedule. “We lay everything out,” Mark says. “We have everything on point to get ready for the fight: training times, time we wake up, time we go to sleep, what we eat. … Everything is dialed in. You say you’re gonna do something, you gotta do it.”

Mark marvels at Montana’s ability to balance everything. “She’s a supermom,” he says. “When I’m 100 percent into training, I come home and do house stuff here and there. She’ll go in the gym and be a professional athlete. As soon as she’s done at the gym, she puts her mom hat on. She’s a good fighter, good wife, good mom. Good everything.”

Both Mark and Montana say they truly enjoy training. After a fight, “we take a couple of weeks off, enjoy being around our family, being normal, eating normal food,” Montana says. But Mark gets the itch again quickly. “It gets tiring being normal,” he says. “You’ve got to keep learning and developing. Because there’s always somebody better. You gotta stay in the gym.”

Zaylyn watches most of her mom’s and stepdad’s fights and is often in the gym with them. “She’s always been super aggressive,” Montana says, laughing. “She definitely wanted to be a part of this. I never forced her into wrestling. She’s been doing jiu-jitsu since she was 3. She wants to go to every practice. She has her best friends at all the practices. It’s just her thing.”

Zaylyn wrestles mainly in Texas and Oklahoma but has competed at tournaments all over the country, from Iowa to New York. “She’s got medals on medals on medals,” Mark says. “At her grandparents’ house, she’s got more rings and plaques. When she won that [trophy cup], she ate cereal and milk out of it.” But there’s one shiny object she still covets. “I want to be an Olympic gold-medal wrestler,” Zaylyn says.

Burg says Zaylyn is among the top-ranked girls in the country in her division and has won national tournaments. But Zaylyn loves wrestling against boys. “It’s fun when they go running to their mama crying,” she explains.

“I ask her, ‘Are all the boys and girls in your school afraid of you?'” Burg says. “She said, ‘Oh yeah, Coach. They’re very afraid of me.’ She’s all of 65 pounds. She is an absolute spitfire. I love her for it. She’s a kid, so she gets away with it.”

Montana can’t always take Zaylyn to wrestling practice or events when she’s training or traveling for her own fights. “My parents [Scot and Laura Stewart] will drive her to tournaments,” Montana says. “My dad’s retired. He just wants to be there for her and help however he can.” Burg says the family is all cut from the same cloth. “The whole family is into it,” he says. “They travel all over the country for that girl. Zaylyn’s grandparents are a lot like Montana. They’re genuinely nice people who care.”

Mark and Montana run each morning, then practice wrestling. They leave time in their daily schedules to pick up Zaylyn from school, hang out with her and have dinner with her before they head to boxing practice each evening. As for what other parents or neighbors think of having budding MMA stars in their midst? “I don’t think many of them even know that we’re UFC fighters,” Montana says.

Mark and Montana follow strict diet plans while they’re training, but they make room on their grocery list to accommodate Zaylyn’s needs. “She’s a kid. She has to eat regular food,” Montana says. “You’ve got doughnuts and other stuff [that tests you]. You gotta dig deep on that.” Mark says it’s a lot more fun to dine out with Zaylyn when he’s not worried about making weight. “Then I don’t mind taking her out to eat, buying her stuff, because if she doesn’t finish it, I eat it,” he says. “I’m the trash can.”

Mark and Montana each fight two or three times a year and are in intense training for seven or eight weeks before each fight, so they try to find ways to enjoy family time away from the gym with Zaylyn, let her just be a kid — and chill out.

“By the time we get her from school, we’re on our second or third training session and we’re exhausted,” Montana says. “We just kind of want to chill out, and she wants to go play outside.” Montana finds ways to make time for Zaylyn, such as doing homework with her outside on the trampoline. “I try my best to find the balance … but sometimes it does get hard.”

Mark and Montana are always running. With fight week approaching and a focus on making their weight, they hit the treadmill at a local gym. “I never really watched fighting when I was younger,” Montana says. “I was just never introduced to it. But I love training. I just love every part of it.” Mark agrees. “It never feels like a job,” he says.

Mark says that when he signed the contract for this fight, he weighed 162 pounds. He’ll compete at 125 pounds. Water loading is part of how he cuts weight. “I eat every three hours. I drink a gallon of water. Come fight week, I’ll start drinking two gallons,” he says — from a bottle covered in written goals to remind him of what he’s working toward. “No sodium on fight week. My body won’t hold on to any water, it’ll start flushing it out. I’ll have to cut about 10 to 12 pounds.”

Mark started training when he was 13 by cutting a deal with a local jiu-jitsu gym. “It was too expensive,” Mark says. “I would clean the gym and they’d let me train for free. That’s what kick-started it for me.” Twelve years later, he’s a professional — but still amazed that he gets paid to do what he loves, even if it comes with some side effects. “I have cauliflower ears,” he says. “My mom doesn’t like these crazy ears. But I enjoy it.”

Montana’s dominance makes it hard to find local fighters who can push her, so Mark often mixes it up with his wife. “Montana would beat up almost every girl around here. So I have to put my stuff on and let her beat me up a little bit,” he says. “People always freak out. But I can mimic her opponent very well. And I can take a shot. If we just bring in another girl who isn’t as dedicated, she’s just gonna maul her the whole time. She’s not gonna learn or get any better.”

After a long day of training and parenting, the De La Rosas decompress by watching fights or training videos together. “It’d be hard if we had a normal relationship,” Mark says. “If one of us wasn’t a fighter, I don’t see how it’d work out.” But their partnership works because it was forged by a shared passion. “I am always amazed by how quiet they are,” Burg says. “A lot of fighters are brash and boisterous. It’s refreshing to see someone like that in the fight world who can go smash somebody’s face in and still be a good person.”

As part of his final push to cut weight before Friday’s official weigh-in, “I’ll do a hot bath, get out, wrap up in towels to keep the heat going.” Mark says. Montana does likewise in a separate but adjoining room at their hotel. “Once I make weight, I’m ready to fight,” Mark says. “I get to eat, I get to enjoy food a little bit. I’m feeling healthy and excited after a hard training camp, excited to show my skills in the cage.”