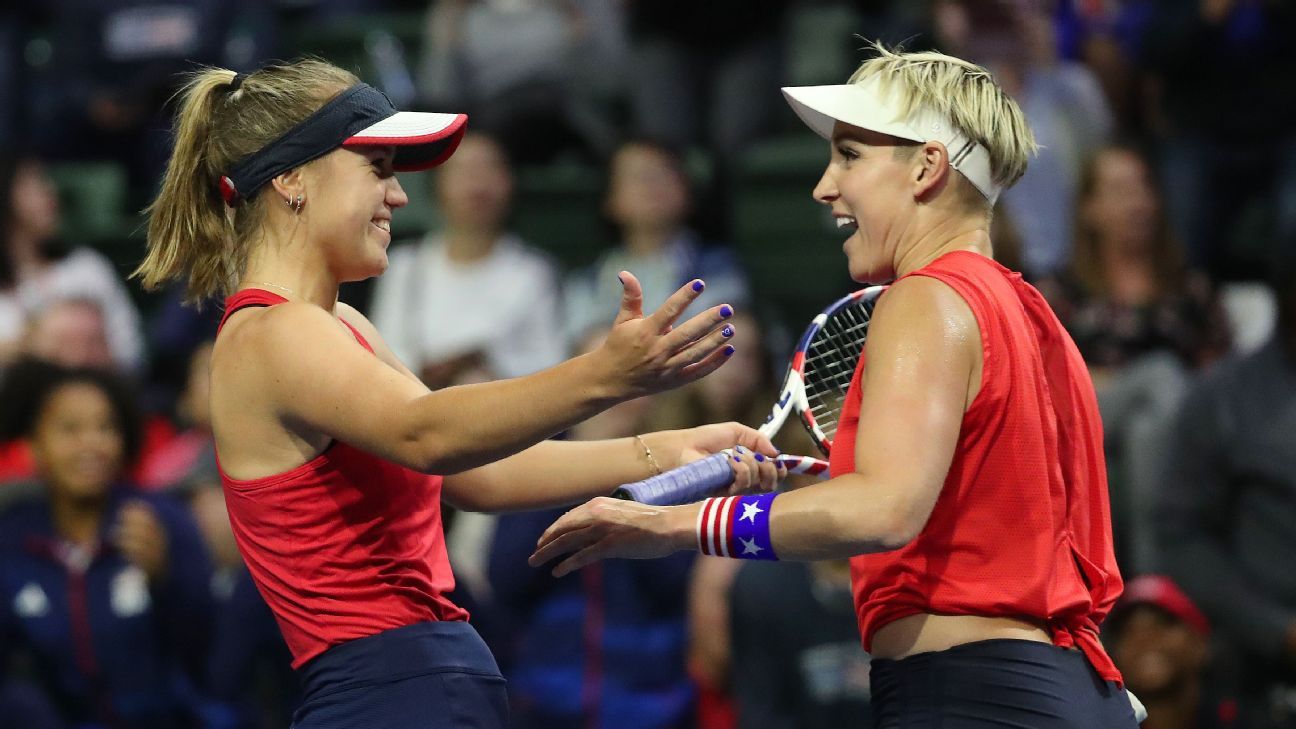 Exactly one week after hoisting the women’s singles trophy at the Australian Open, Sofia Kenin again stood in triumph with cheers cascading over her from an appreciative crowd.

This time, Kenin was not alone. On Saturday at a Fed Cup event in Everett, Washington, Kenin celebrated with her doubles partner, Bethanie Mattek-Sands. They had just stopped Latvia’s Jelena Ostapenko and Anastasija Sevastova, 6-4, 6-0, to clinch the five-match tie for the U.S., 3-2. It was the decisive third match of a day that started with the Americans ahead two matches to none.

“I’m so glad I got to be out there with this little beast over here,” Mattek-Sands added, referring to the 5-foot-7 Kenin.

The win punched the U.S. team’s ticket to the new-look 12-team Fed Cup by BNP Paribas Finals to be played on April 14-19 in Budapest, Hungary. Like Davis Cup, Fed Cup has experienced a makeover, adopting a World Cup-style arrangement that will feature a round-robin format with four groups of three teams, followed by knock-out semifinals and final over the course of one week.

This year, Fed Cup is also a precursor to the Tokyo Olympic Games from July 24-Aug. 9. The competition offers the same daunting mix of opportunity and challenge as any other event in which national honor, not just individual accomplishment, is at stake. That’s a mission the newest U.S. Grand Slam singles champion has embraced in more ways than one.

Kenin, who just turned 21 in November, has appeared in just three previous Fed Cup ties, only one of them a win. She was thrown into the deep end as an 18-year-old in her first appearance, a final in Prague against a veteran Czech team. She lost a pair of three-set heartbreakers in the defeat for the U.S., but that didn’t dim her enthusiasm.

Kenin jumped at the opportunity to use a custom racket her sponsor, Babolat, recently created. The frames are painted to resemble various nations’ flags. “They asked me if I wanted to be the only American representing the American flag,” Kenin told the press in Everett. “I was honored and super excited. I said I’d love to do it.”

The stars-and-stripes racket was as effective as a magic wand in Australia, but after Kenin won, many expected she would pull out of the Fed Cup. She said the idea never crossed her mind.

Kenin had another motive for playing Fed Cup. She was looking forward to sharing a training table, locker room and common mission with Williams, one of her idols.

“I’ve watched Serena. I’ve been following her, all the Slams she’s been winning,” Kenin told the press after her triumph in Melbourne. “I can’t wait to compete and be on the same team with her in Fed Cup.”

Rinaldi, a former top pro and Fed Cup veteran herself, was thrilled with Kenin’s decision. She told reporters in Everett: “Sonya (the name Kenin prefers to “Sofia”) coming back after the Australian Open, keeping her commitment (to participate), it’s just great for American tennis.”

Even without Kenin, Team USA would have loomed formidable. Williams was 14-0 in Fed Cup singles and hadn’t lost even a set since a world group playoff tie against Italy five years ago. Injury has limited Williams’ availability over the years, so much so that she joked about it on Friday, injecting the subject of her painful, third-round loss to Wang Qiang at the Australian Open into the conversation.

“Every time I try to play [Fed Cup], something happens,” Williams said, referring to her history of physical problems. “This year I was like, ‘Let me exit Australia early so I could play Fed Cup.'”

In this matchup, the U.S. was facing a two-woman Latvian team comprised of No. 40 Ostapenko and No. 41 Sevastova (no other Latvian is ranked in the WTA’s top 250). The home nation certainly looked like a Dream Team by the end of Day 1, Williams and Kenin winning their singles matches on Friday to give the U.S. a seemingly insurmountable 2-0 lead.

But things went sideways for the U.S. on Saturday. First, Ostapenko used the same aggressive shotmaking that earned her own major title to stun Kenin. Then Williams and Sevastova played a match full of mood swings, won by the underdog in 2 hours, 25 minutes, 7-6 (5), 3-6, 7-6 (4).

“I was cheering Serena on very loud,” Kenin said of her attempt to show Williams support during her grueling three-setter. “I was going all out. I have never been nervous watching anyone, so I was really nervous for [Serena]. I was just super happy, super excited. This is why we play. And moments like these you’re going to remember forever.”

Rinaldi then made a bold, late decision to alter her lineup for doubles, pulling Riske and adding Kenin — whose own singles loss just hours earlier had to be fresh in her mind — as the partner for former No. 1-ranked doubles expert Mattek-Sands. The two had been successful on a number of occasions, including their super tiebreaker win over the same Latvian pair in the title match at the China Open last fall.

The U.S. duo had an easier time of it on Saturday, as the adrenaline rush of winning their singles abated and the Latvians ran out of gas in the doubles. By the end, Kenin had played three matches in roughly 24 hours.

Fed Cup always took its cues — and format — from Davis Cup since 1963. It hasn’t gained the traction it probably deserves in the U.S., but the event carries great weight in most other nations not least because it enjoys the support of most top players. Fed Cup has faced the same format challenges as Davis Cup and addressed them in similar fashion.

Two timely factors may help Fed Cup flourish this year. The sudden popularity of team events has become one of the major storylines in the game. Australian officials have said they plan to create a WTA version of the new ATP Cup, a new event that replaced a number of traditional tournaments as the tune-up for the first major of the year. The enthusiasm for team formats has been infectious, especially among players.

Williams played her first Fed Cup tie 21 years ago. She surrendered just two games to Italy’s Rita Grande in her singles debut and teamed with sister Venus to win the doubles. Her own enthusiasm remains undiminished, even though her priorities changed significantly over the years.

“It’s just a different atmosphere because you have your coach next to you,” Williams said after her opening singles win last week. “You don’t want to let her down. She’s encouraging you … [and] you’re playing for your country, it’s not just for you. Then you have your teammates, you can’t let them down either. It’s really fun.”

Some players might say “fun” isn’t exactly the right word to describe a situation in which the pressure to perform, for all the reasons Williams cited, can paralyze the most veteran pro. Kenin seems more likely to inherit Williams’ view.

“I was obviously a little nervous coming in after Australia,” Kenin said. “I felt tired, but I tried to get that out of my mind and just represent and do what I do best.”

What she does best nowadays is win, each successive triumph making her more rather than less comfortable in her rapidly evolving role as the WTA’s newest star.

Doncic to miss Mavs vs. Warriors with heel injury
Commanders’ Howell to start offseason as QB1
NHL superstar roundtable: Changing playoffs, next expansion teams and cheat meals
‘Mate, we can do it. I have full faith in ourselves’
Pelicans beat Lakers, snap skid with ‘a gutsy win’