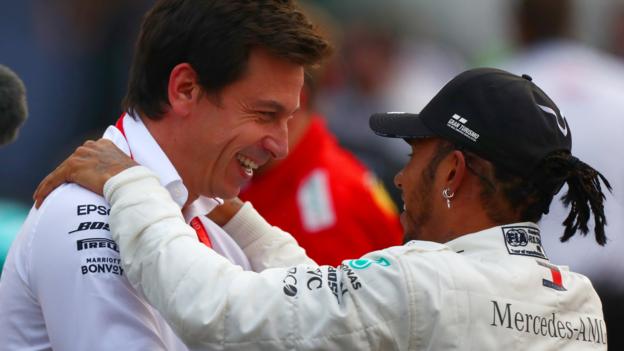 Mercedes Formula 1 boss Toto Wolff says that Lewis Hamilton staying with the team beyond the end of this season is “the obvious pairing”.

The six-time world champion’s contract runs out at the end of 2020 and he has so far made no decisions on his future.

Wolff said: “We would like to have the fastest man in the car and I know Lewis wants to be in the fastest car, so there is an obvious mutual outcome.”

“We travel around the world 10 months every year but over the winter we leave each other in peace and the last conversation I had with him was at the Christmas party,” said Wolff.

Wolff and Hamilton are likely to begin initial conversations over a new contract when they meet this month – the 2020 Mercedes runs for the first time at Silverstone on Friday before pre-season testing starts in Spain on 19 February.

What about Mercedes’ future?

Mercedes’ contract to race in F1 also ends this year but Wolff said they were committed to F1 “for the long term” and described reports that parent company Daimler would discuss its future in the sport as “complete nonsense”.

However, he stopped short of absolutely committing Mercedes beyond 2020 because of ongoing negotiations over the terms of the teams’ agreements with F1.

“F1 provides a great marketing platform for our brand,” said Wolff, who was speaking at the launch of Mercedes’ new partnership with Team Ineos, which they say will include technology transfer with Ineos boss Sir Jim Ratcliffe’s energy business, as well as teams in cycling’s Tour de France and sailing’s America’s Cup.

“This is what we do. We build race and road cars, F1 is the halo platform.

“We like the platform but at the same time we are in negotiation with the rights holders and things need to be sorted. But the partnership indicates our wish to continue.”

As for Wolff’s own future with Mercedes, he pointed out that he was a 30% shareholder in the team as well as the man who runs Mercedes’ entire motorsport programme.

“We are planning our long-term strategy together with Daimler, and Jim and his partners coming in is yet another building block.

“So all sails are set for a successful future but, like with Lewis, we are in the middle of discussions and I wouldn’t want to live comment when things are going to be signed.”

Mercedes last year set a record of six consecutive drivers’ and constructors’ championship doubles, but Wolff said the team were just as motivated to continue their winning run into a seventh year.

Wolff said: “Every year we set the right objectives and objectives that are being understood throughout the organisation.

“It is so important to wake up with the right purpose. I don’t see a lack of purpose in the organisation. The pain of losing is so much more intense and last longer than the joy of winning and the sheer thought about losing makes you forget about all your previous achievements.

“Last year’s achievements don’t buy us any credit, so all lap times go to zero and we are yet again in front of another challenge.

“In a way, there is a reason why six is a world record, because it is bloody difficult. We want to push that needle further. We have great partners who share the same values and will be pushing us.

“This year’s championship is a two-year championship. There is such a massive regulatory change for 2021 that balancing your allocation of resource will be crucial, and how much of your resource you switch to the 2021 car, because the learning and development slope is much steeper at the beginning and if you get it wrong, you can lose a lot of time.

“This is a challenge we have embraced through two regulation changes.”

F1 heads into the start of the new season in Australia on 13-15 March with uncertainty over the Chinese Grand Prix, due to be the fourth race of the season on 17 April, following the coronavirus outbreak.

A race of the all-electric Formula E series due to be held in China in March has already been cancelled. F1 has said holding the Grand Prix in Shanghai “looks very difficult”, while governing body the FIA says it is “monitoring the situation in China closely”.

Wolff said: “I would very much hope we go to China. After this, I am going to the Chinese embassy for my biometric scan. Everything looks like we are going.

“It would be a shame if we don’t go. China starts to become a big market, the race was sold out last year, we have great fan activities. But health comes first and I hope they get in control of that.”