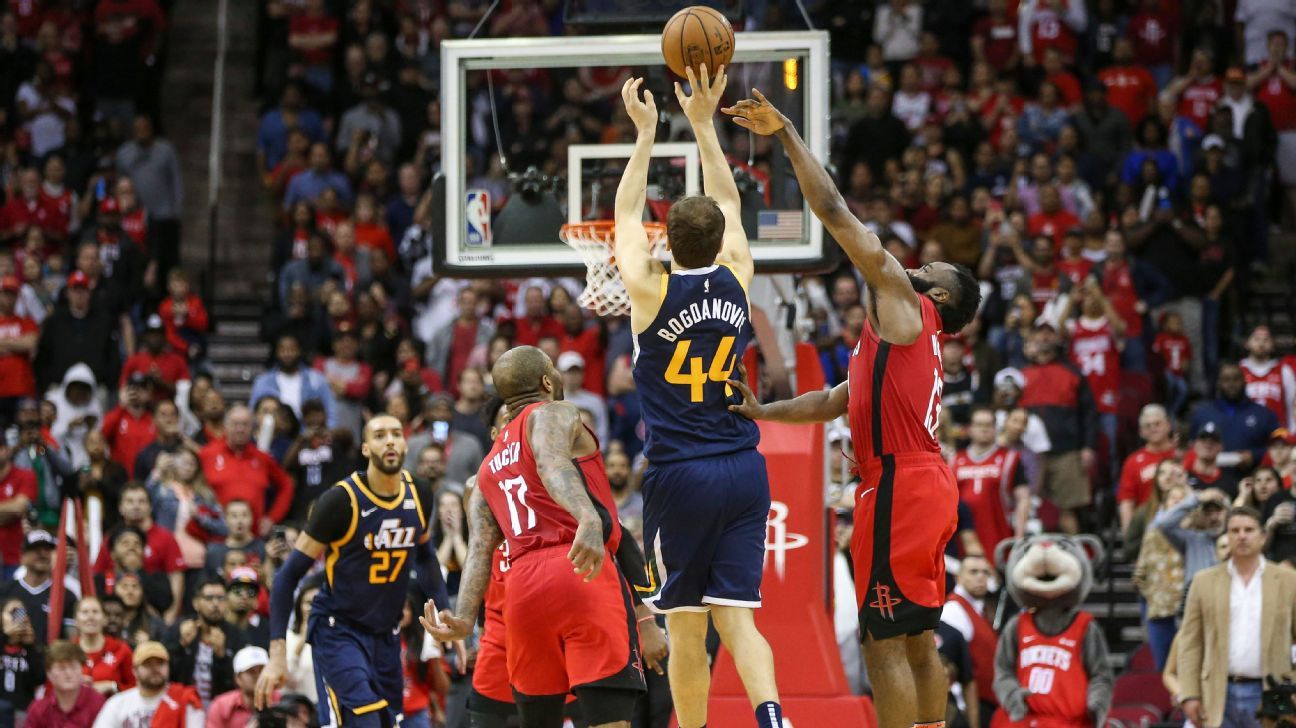 HOUSTON — It surprised Bojan Bogdanovic that he was substituted back into the game for the final possession with the Utah Jazz needing a shot to send the game into overtime or win, much less coach Quin Snyder designed the final play with him as the primary option.

It’d been a rough night for Bogdanovic up to that point, as he was 1-of-6 from the floor, including a corner 3-pointer that missed so badly that it banged off the side of the backboard.

“It’s big time from their part to have that trust and confidence in me that I would make the last shot after the game that I had,” Bogdanovic said. “I was, from the beginning of the game, kind of off. But when you have a coaching staff that draws the last play for you, you better go out there with the confidence.”

That last shot, a 29-footer with two Houston Rockets draped all over him, splashed through the net to give the Jazz a 114-113 win over the team that has eliminated Utah from the playoffs the past two seasons.

Bogdanovic is the only player this season to hit multiple game-winning buzzer-beaters, according to ESPN Stats & Information research. He hit a tie-breaking 3 at the buzzer on Nov. 8 to beat the Milwaukee Bucks, when he got a clean look after breaking to the corner.

The shot to beat the Rockets was the most difficult game winner any player has hit this season, according to Second Spectrum data, which calculated that Bogdanovic’s shot over James Harden and P.J. Tucker had only a 12.6% probability of going in.

“As soon as he shot it, I knew it was good,” said Tucker, who hit an opener corner 3 off a drive-and-kick feed from Russell Westbrook to give the Rockets the lead with 1.6 seconds remaining.

After the timeout, Bogdanovic began the play on the right wing, near inbounds passer Joe Ingles. As Jordan Clarkson (team-high 30 points off the bench) cut from halfcourt to the right corner, Bogdanovic ran to the opposite block to set a screen for Donovan Mitchell. The Rockets switched, putting Tucker on Bogdanovic. Mitchell curled off a Rudy Gobert screen at the top of the 3-point arc, which led to another Rockets switch, and Gobert slipped toward the basket instead of setting a screen on Tucker for Bogdanovic.

When Bogdanovic caught the ball, Harden immediately double-teamed him. Tucker and Harden were both inches away — perhaps even making contact — as Bogdanovic released the shot.

“That’s just a great shot. I don’t deserve the screen assist on this one,” Gobert said with a laugh.

Bogdanovic is shooting 42.4% from 3-point range this season, which ranks 12th in the league. He’s now 2-of-2 on buzzer-beaters with the game on the line.

“He’s our best shooter,” said Jazz point guard Mike Conley, who had 20 points and six assists. “He’s a guy who’s made big shots in the past for us. We rely on that and he feels like he’s the guy that can do that no matter how he’s shooting.”

The shot allowed the Jazz (34-18) to remain in fourth place in the West standings, one spot ahead of the 33-20 Rockets. It evened the season series between the two teams at one win apiece, with the Feb. 22 game in Utah set to determine the playoff seeding tiebreaker.

As the Toyota Center crowd sat in hushed silence, the Jazz mobbed Bogdanovic at midcourt. His teammates were amused and confused by the colorful words that Bogdanovic shouted in his native Croatian during the celebration.

“There’s no way to translate,” Bogdanovic said. “They already asked me. I cursed in my language. You cannot translate it in English.”