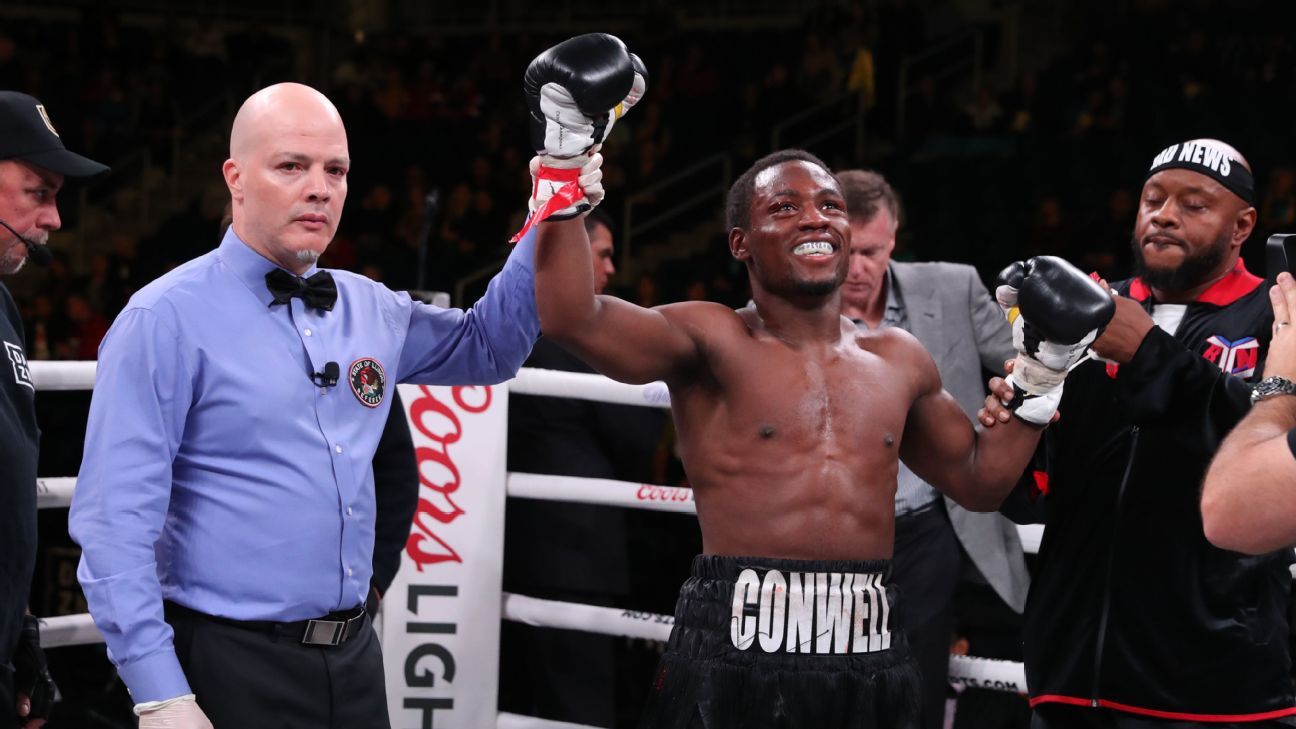 Junior middleweight hopeful Charles Conwell scored a fifth round stoppage of Ramses Agaton at the Civic Center in Hammond, Indiana on Saturday night. For Conwell, this was his first bout since the tragic aftermath of his last fight on October 12, where Patrick Day fell into a coma after getting knocked out in 10 rounds and then died the next week from brain trauma suffered in the fight.

Conwell (12-0, 9 KOs) told ESPN on Sunday afternoon, “It felt good, I was back in my element, back where I was comfortable, back having fun and doing my thing. So I was real excited to be back.”

The 22-year-old native of Cleveland said after the death of Day, he had contemplated his future in the sport.

“When you experience something that bad, you don’t want it to happen again, or to anybody else,” said Conwell, who represented the United States in the 2016 Olympics. “So you think about it, you question, ‘should I be doing this?’ or ‘should I keep doing this?’ Just stuff like that.”

For a spell, Conwell stayed away from social media as speculation swirled about Day’s condition.

“I definitely got off the internet for a little while, it was just a lot of stuff happening after that time,” he explained. “You got a lot of crazy people who talk in different types of ways — positive and negative — but I wanted to keep my mind clear. I stayed away from all that type of stuff.”

But Conwell did pen an emotional open letter on Instagram to Day and his team where he did address the dire situation.

After a bout a month off, Conwell got back to work, and it was here that he found solace. He says, “I feel boxing actually made me feel better, going to the gym, and working out, hitting the bag. It’s my element, so it was more comforting, than anything else.”

This particular fight this weekend was a small club show, meaning that it was not televised on a major outlet. This was by design.

“We just felt like after everything that happened, he deserved sort of a non-pressure situation to find out if he was going to be affected in some way. It’s just really caring about his emotions,” said his manager, David McWater.

Conwell said of this decision, “It made it kind of better, it was the first one back, just to see where I’m at. It made it smooth, more comfortable. I liked it.”

In this particular fight, Agaton (22-12-3, 12 KOs) was hit repeatedly to the body. But Conwell, who is a heavy-handed puncher, insists it had nothing to do with the Day fight.

“It was the game plan I was going with for that certain opponent,” he stated. “I wanted to concentrate on the body a lot because of certain different reasons, certain scenarios with the fight, and I just wanted to dwell on the body. I knew that was a good way to get that guy out of there.”

As he got ready for the fight, Conwell said he really felt no different than any other bout. But after his victory, he admitted that it was a mixture of relief and jubilation. “Not only for me, but I feel for a lot of people who thought I couldn’t continue on,” expressed Conwell. “So it wasn’t just for myself, but people around me, my fans, people who know me. It was for all of them.”

Now Conwell will move onto to a fight on April 10th that will be televised on Showtime, according to McWater. The young man who started boxing at 11 years old as his father took him to the gym and is now living out his dreams as a professional athlete, has big plans for 2020.

“This year I want to prove a lot, I want to do a lot, prove I’m one of the top guys out here,” Conwell said. “I’m going to stay in the gym, stay working, getting better everyday, not really taking any time off.”

Reigning winner Tshiebwe among Wooden top 20
McIlroy leads by 3 ahead of final day in Dubai
Longtime reliever O’Day retires after 15 seasons
‘Holy crap, we got a shot’: Inside the 49ers’ season-changing Christian McCaffrey trade
Vets Kennedy, Frazier among Rangers signees