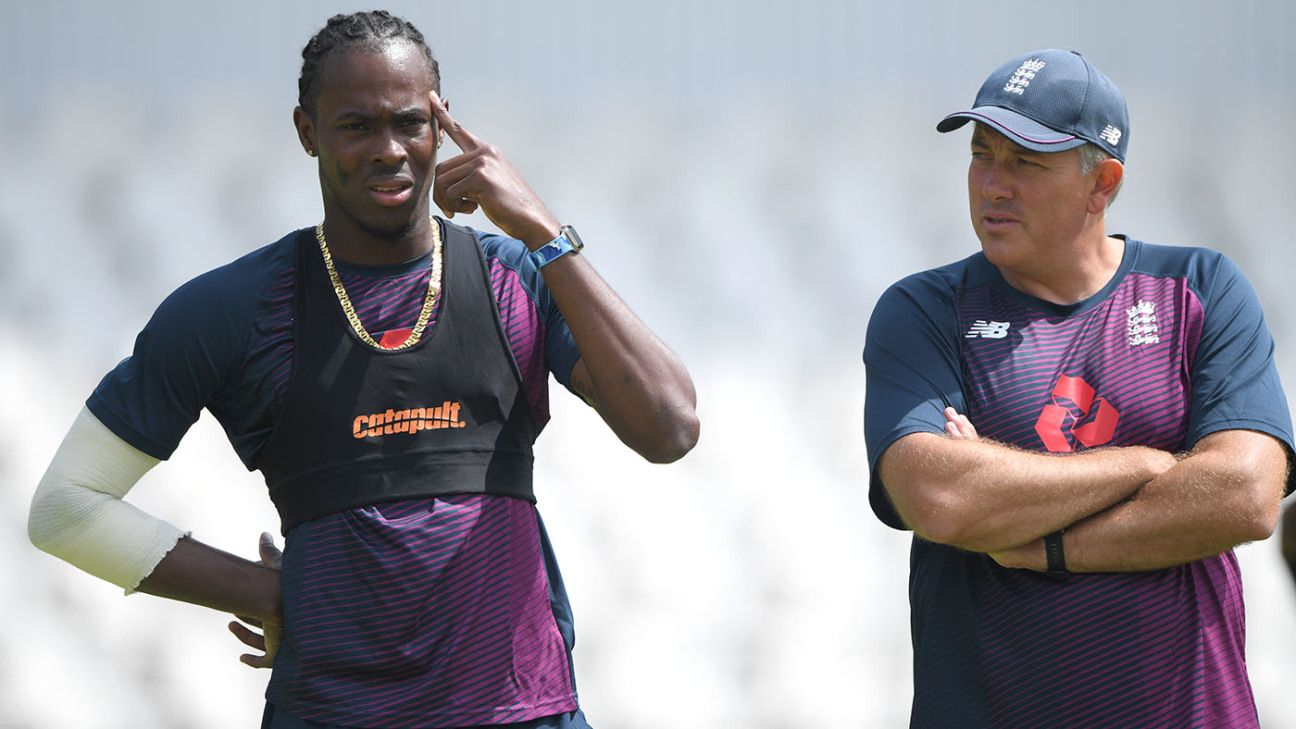 Chris Silverwood concedes that England may need to manage Jofra Archer‘s workload in a similar way to that of Mark Wood if he is to preserve his prime pace-bowling assets.

With Archer facing three months on the sidelines recovering from a stress fracture in his right elbow, questions have been raised over the demands placed on a prized bowling talent who only made his international debut nine months ago.

Come the 2021-22 Ashes series in Australia, Silverwood wants to be able to rotate his quicks so that he has at least three fit and firing at any one time.

“The life of a fast bowler is hard. Injuries are going to happen. You won’t stop that,” Silverwood said. “But the international calendar is now absolutely cram-packed so, to talk about smart cricket, from a managerial point of view we’ve got to be smart with how we handle our assets too.

“I would love to have those for the Ashes, because we all know we get judged on the Ashes, so how can we give ourselves the best chance of succeeding? If I have three of them fit there … then it would be a great advantage for us.”

Wood’s history of injuries means he has increasingly had to have his workload managed carefully, although an argument could be made that England are still learning how to “be smart” with his handling after he noticed his formidable speed dipping during a six-over spell late on the fourth evening of the third Test against South Africa at Port Elizabeth.

Wood was named Man of the Match in England’s 191-run fourth-Test victory in Johannesburg, having been a doubtful starter on the first morning after pulling up sore from the previous Test, his first match since the World Cup final in July. Had Archer not felt pain in his elbow during the warm-up, it is questionable whether Wood would have played at all.

Archer’s injury, along with that of another paceman, Olly Stone, who has a stress fracture in his back, can only highlight the importance of workload management and the message seems to be hitting home slowly.

While Joe Root this week denied suggestions that Archer had been overbowled since making his international debut ahead of the 2019 World Cup, the fact is he played four out of five Ashes Tests, bowling 44 overs on his Test debut at Lord’s, and then 42 in one innings at Mount Maunganui on England’s New Zealand tour in November.

Having featured in the first Test in South Africa, taking his third five-wicket haul in seven appearances, Archer missed the rest of the series with elbow soreness. But Root said the amount of cricket Archer had played in his career to date, including in various franchise leagues, had likely taken a toll.

“We managed Woody through the Test matches he played by bowling him in short, sharp spells,” Silverwood added. “Would we look to do that with Jofra from now on? Yes, we could be looking at that.”

Archer’s injury means he will miss the two-Test tour to Sri Lanka in March, with Moeen Ali also expected to miss out as he maintains his break from Test cricket.

“He’s still a very valuable asset to the Test side, always has been and always will be,” Silverwood said of Moeen. “Mo, when he’s ready to come back, will give us some really good headaches which I’m really pleased about.

“My longer-term outlook on this is, if we can give Mo some time now and respect his wishes and support him, then long term we might have him back for longer.”

England begin their three-match T20I series against South Africa at East London on Wednesday with Wood set to return after resting during their three ODIs. Ben Stokes and Jos Buttler are also likely to play the T20s with England targeting the World Cup in Australia later this year.

“I would like to put the best XI out each time,” Silverwood said. “We want to make sure we are fine tuning now and bringing the team together that we feel can win that World Cup.”