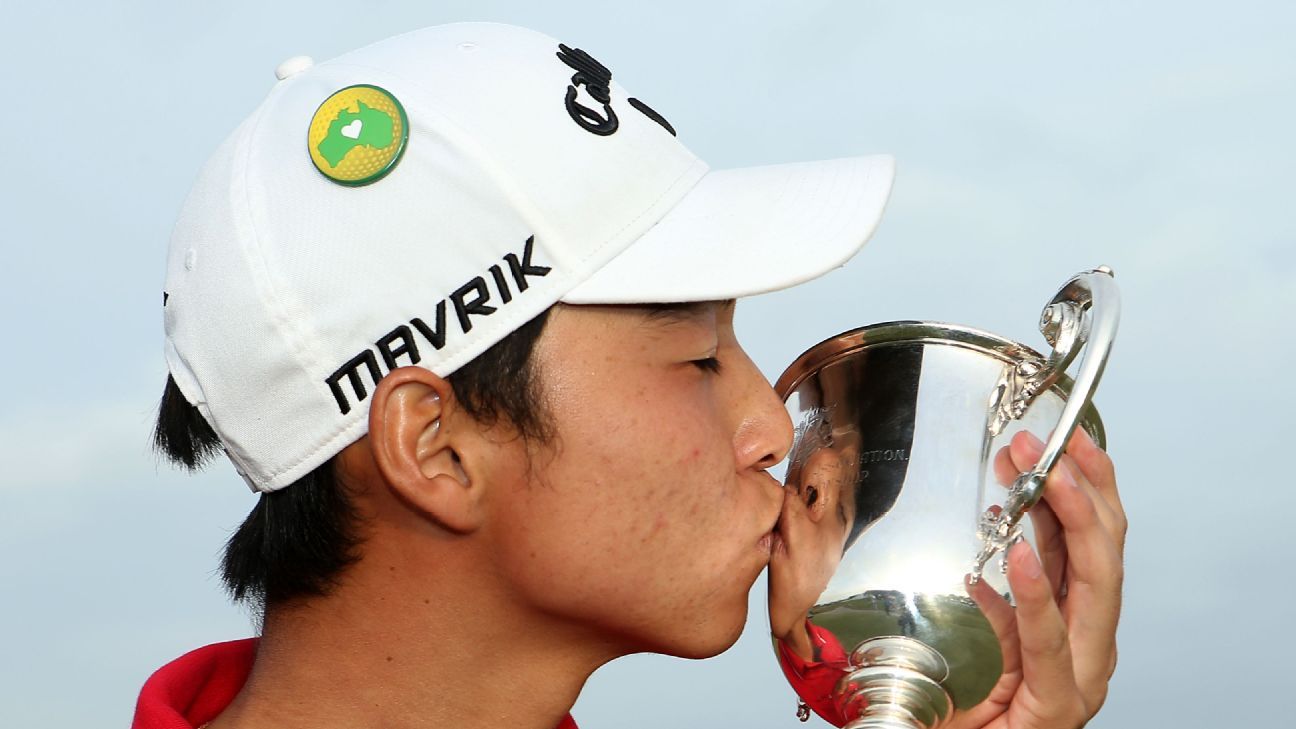 The 21-year-old emulated the feats of his celebrated older sister, world No.9 Minjee Lee, who won the women’s Vic Open at the same Barwon Heads venue in 2014 and 2018.

It means both got their first pro victories at the Vic Open, which features both men’s and women’s tournaments played concurrently.

Overnight leader Lee finished in style with a closing birdie at the final hole to win by two shots from New Zealander Ryan Fox on Sunday and was embraced by his delighted sister on the 18th green.

“It was nice of her to come on; it was awesome,” said Lee.

“With my sister and I winning the same tournament it is pretty special.

“And I’ve got bragging rights now so it’s even better.”

The West Australian carded a four-under 68 in strong winds to finish at 19-under 269 while Fox applied some late pressure with a blistering 64.

The win gives the gifted Lee a two-year exemption on the European tour, which co-sanctioned the event, having finishing just two spots shy of keeping his card there in 2019.

“I can pick and choose now on the European Tour and this year I’ll be focusing on that,” he said.

“”I’m looking forward to it.

“It was tough over the last year and a bit, because I had to go and play whenever I got the call-up.”

The wind picked up during the afternoon, although conditions were not as brutal as the 60 km/h gusts that hit during Saturday’s third round.

“I’ve given myself nine out of 10 for ball striking this week,” said Lee.

“I knew just coming into today that I could just stay calm and just hit every shot the same as the last three days.”

He plans to use some of the $183,300 prize money on a new car, meaning he will no longer have to borrow his sister’s vehicle when they are back home in Perth.

Minjee Lee was in the frame for a possible third women’s Vic Open triumph for much of Sunday’s final round, but had to settle for a tie for sixth after closing with a one-over 73.

She considered offering her brother some advice before the final round but decided against it.

“I think he did a fantastic job all week, just taming the wind, not everybody can do it,” she said.

“”I’m just super proud of him.

Fox’s final round of eight-under 64, including two eagles, was three strokes better than anyone else managed on Sunday.

“You’re not supposed to shoot 64 on a day like today but I’ll certainly take it,” said Fox, the son of former All Blacks rugby great Grant Fox.

Australians Marcus Fraser and Travis Smyth and Frenchman Robin Sciot-Siegrist tied for third at 14-under.