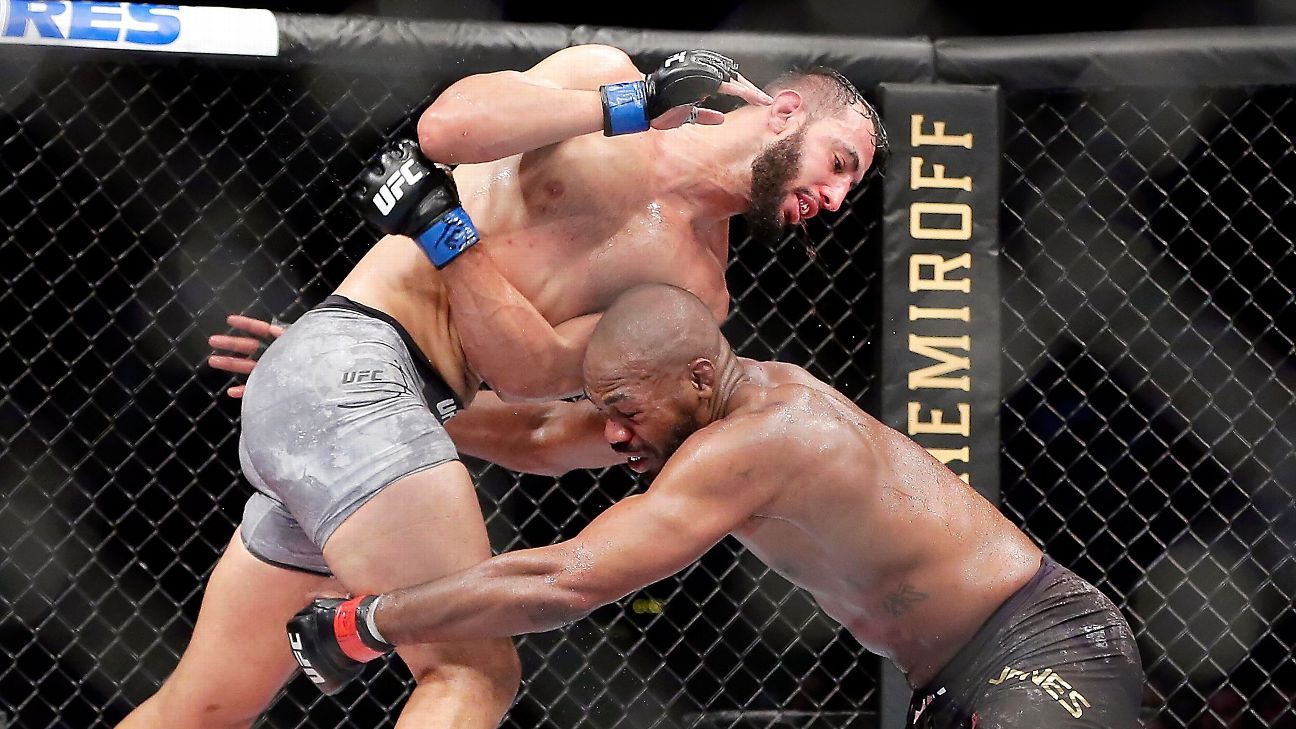 HOUSTON — The key moment for Jon Jones on Saturday night was the fifth round. It might not have been a surprise that Jones won the fifth round against Dominick Reyes, but the fact that he needed to win the round to retain his UFC light heavyweight title likely surprised many.

Jones notched his UFC-record 14th title-fight victory with a unanimous decision in the main event of UFC 247 at the Toyota Center.

“I knew it was a really close fight, and I turned it on in the fifth round,” Jones said. “That fifth round won me the fight.” 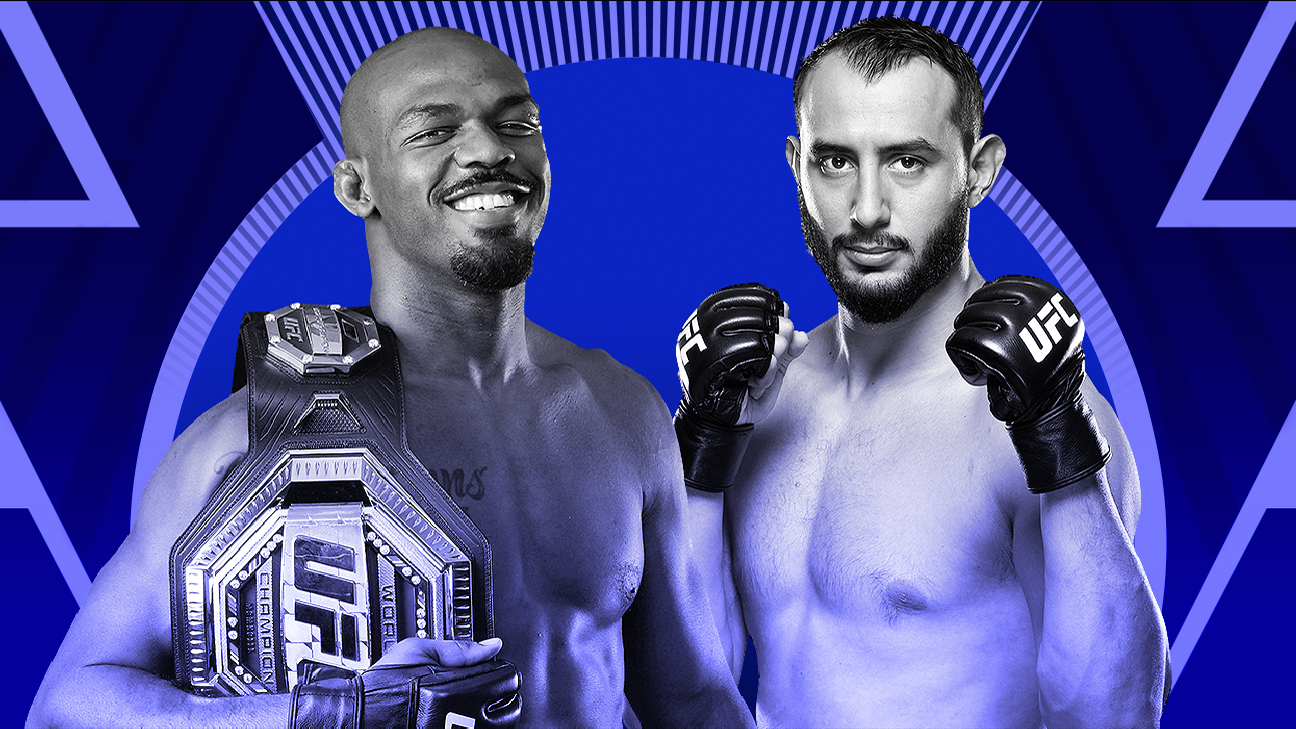 If the pay-per-view has been purchased, all fights from UFC 247: Jones vs. Reyes are available to watch on ESPN+.

The disparity in the level of experience with five-round fights was evident. Jones is tied with Georges St-Pierre with eight fights that have gone five rounds, third most in UFC history. This was the first time Reyes has fought past the third.

This was a close fight by every definition, but the fifth round was as decisive as it gets. When the chips were down, Jones showed up. He looked like the greatest fighter in the world, which is what we’ve come to expect from him.

Jones could not get Reyes on the ground often, going 2-of-8 on takedown attempts, which was a major equalizer in the bout. Had Reyes won the fifth, he would have scored the upset.

But he wasn’t ready to accomplish that in the final five minutes of the 25-minute championship bout. Perhaps he will be someday. Probably he will someday. But not Saturday.

UFC president Dana White heard from disgruntled fans who thought Reyes won the fight, but one reaction stood out.

“I think there’s a lot of controversy tonight,” White said. “My son is in Laguna Beach [California] with a bunch of his friends at the beach house, he’s freaking out on me, saying, ‘You know Reyes won that fight. You know he did.’ My son thinks the fix is in or something. It’s crazy. There are some people very upset right now, and a lot of controversy about all the fights tonight.”

White said the Texas commission that handles officials and referees has people in positions without enough experience with big-time fights.

“I’ve had scoring all over the map,” he said. “I had people who had it 2-2 going into the last round. Joe Silva, former matchmaker of the UFC, had the fight a draw. But at the end of the day, none of us are judges. The judges scored the thing, they gave it to Jon Jones.”

White said Reyes looked “awesome,” but he didn’t commit on the spot to an immediate rematch.

“I don’t know right here, right now if you do an immediate rematch,” he said. “We’ll see. … You don’t pull the trigger the same night. You sit back, you wait, you don’t start making decisions ’til next week. Take our time, let’s absorb this evening, and we’ll figure it out later on down the line. But at the end of the day we all get together in a room and we talk, then I ultimately make the decision on who’s going to fight next.”

Whenever someone brings up Valentina Shevchenko‘s dominance, it usually focuses on how incredible she is as a striker. This is a woman who has more than a dozen Muay Thai championships under her belt and has 59 wins in kickboxing.

There is no doubt that Shevchenko is one of the best fighters in the world — male or female — standing up. She’s a technical master. But how well-rounded she has become cannot be overstated.

In Shevchenko’s UFC 247 postfight interview, Joe Rogan noted that Shevchenko seems to be getting better. That is accurate — and a scary thought for the rest of the women’s flyweight division.

Shevchenko beat Katlyn Chookagian to retain the UFC women’s flyweight belt on Saturday, and she did it almost entirely with her wrestling, grappling and strikes on the ground. She outstruck Chookagian 40-17 on the ground.

In the first round, Shevchenko took Chookagian down and sliced her open with an elbow. Chookagian was bleeding from above her left eye in between rounds.

In the third round, Shevchenko caught a Chookagian kick and put the challenger on her back yet again. This time, Shevchenko advanced into a mounted guillotine position and rained down punches and elbows to Chookagian’s face while Chookagian’s arms were trapped. Referee Jacob Montalvo had no choice but to step in and rule it a TKO at 1:03 of the round as Shevchenko notched just the eighth KO/TKO by crucifix in UFC history.

It was a violent — almost mean — performance from Shevchenko, who had a lackluster defense against Liz Carmouche in August. Shevchenko showed major killer instinct to finish a clearly outmatched opponent. But more importantly, she appears to be evolving even more into a perfectly well-rounded fighter. Add that to her striking repertoire — she landed a spinning wheel kick and axe kick on Chookagian — and it makes for a dominant, frightening titleholder.

Usman motivated for Masvidal, nothing set yet

Welterweight champion Kamaru Usman was in attendance, fresh off a recent trip to Saudi Arabia. He said he knows the UFC wants to put together a fight between him and Jorge Masvidal in July in Las Vegas, but he has not signed a contract and would like to talk to the promotion first.

He says he has always given Masvidal props as a competitor, but he thinks his wins in 2019 have been slightly blown out of proportion. He doesn’t believe wins against Nate Diaz, who has fought at lightweight, and Ben Askren, who immediately retired, elevate him to No. 1 contender. But he’s motivated for a fight against Masvidal and has heard all the physical threats before. He isn’t worried about defending his title.

Houston shows out at UFC 247

In addition to the typical cast of characters from the UFC roster, there was some serious star power in attendance Saturday at the Toyota Center. Academy Award winning actress Halle Berry saw Shevchenko, one of her co-stars in Berry’s 2019 directorial debut “Bruised,” dominate Chookagian.

“The Six Million Dollar Man,” Lee Majors, 80, was in Houston to take in the fights, as was “Shazam” and “Chuck” star Zachary Levi.

Finally, some of the biggest sport stars Houston has to offer were in the building, including the Rockets’ Russell Westbrook and Eric Gordon, Texans stars Deshaun Watson and JJ Watt, and Astros shortstop Carlos Correa.

A little after 1 p.m. Friday, James Krause was having sushi with his team in Houston. He was in town to corner his teammate Youssef Zalal, who was making his UFC debut in the UFC 247 opener.

While they were at lunch, Krause’s manager, Jason House, got a call informing him that Antonio Arroyo had fallen ill after the official weigh-ins and was being taken to the hospital. Arroyo would no longer be able to fight Trevin Giles on the UFC 247 prelims the next day.

House said he would call UFC matchmaker Mick Maynard if Krause were serious.

Krause was able to weigh in successfully at 183.5 pounds at the ceremonial weigh-ins. He was already on weight because he fights at 170 pounds.

The UFC and Krause’s team sent medical documents to the Texas Department of Licensing and Regulation (TDLR). Then, at 9 p.m. Friday, a doctor administered a physical on Krause at the host hotel. The doctor sent the information back to the TLDR, and Krause was officially cleared for competition.

“Took a chance and came up short tonight,” Krause wrote afterward on Instagram. “Lost a split decision to a tough guy a weight class above me on 18 hours notice. I knew what I was getting into and would do it all over again. With no risk there is no reward.”

Brian Ortega was in the Toyota Center to support Reyes — a fellow Californian — and do some promotional work. He said he is aware of the rumors that he is fighting Zabit Magomedsharipov in April, but he said nothing is signed, and he’s not sure what’s going on.

He does want to fight Zabit five rounds, and he said if Zabit wants to be a champ this year, take a five-rounder.

Khaos: ‘Get used to the name’

What a couple of weeks for Khaos Williams, a 25-year-old welterweight. Williams took Saturday’s fight against Alex Morono on short notice after Morono’s original opponent, Dhiego Lima, was forced to withdraw.

Morono was on a three-fight win streak coming in, and he fights out of Texas. Williams promised earlier in the week that the hometown crowd would go home unhappy, and he delivered with a KO just 27 seconds into round 1.

“Like I said, Khaos Williams, get used to the name, I’ll be here and I’m here to stay,” Williams said. “I’m the future, and one day I’ll be fighting for the title.”

Tough night for the home team

Fortis MMA has been one of the top MMA teams of the past two years, and it went 19-5 in 2019. Postfight interviews with Fortis athletes, who are all close to head coach Sayif Saud, have become regular occurrences in the Octagon after victories.

Fortis MMA was set up for a big night in its native state of Texas but instead went 0-3 on the night as Austin Lingo and Miles Johns suffered their first defeats and Alex Morono was stopped by Khaos Williams.

As he walked past ESPN, Saud was asked if he had anyone left on the rest of the card and joked, “Three losses isn’t enough?”

A very rare off night for one of the premiere camps.

Moment of silence for Kobe Bryant, other victims of crash

Before the start of the main card, the UFC paid tribute to the memory of Kobe Bryant, his daughter Gianna and the seven other people who died in a helicopter crash on Jan. 26 in Calabasas, California.

He was born in Morocco and moved to the United States as a child. He didn’t see his mother for 11 years because he didn’t have a green card. If he left the country, he wouldn’t have been able to get back in. He finally got that settled last year and saw his mother for the first time in more than a decade, and his manager Jason House says he has noticed a difference since. Zalal is a happier, poised, more content and complete human. He’s only 23.

Zalal was poised during the fight, but he revealed his emotions a bit after the bout, when he was being interviewed in the Octagon. “I’m talking to Joe Rogan,” he said with a smile.

‘Going to be a family’: Ishbia introduced by Suns
Lightweight Lee agrees to exclusive deal with UFC
‘The disrespect’: James Harden reacts to being left off All-Star roster
Warriors’ Curry (knee) exits in 2nd half; MRI next
Irving: Felt ‘very disrespected’ at times with Nets