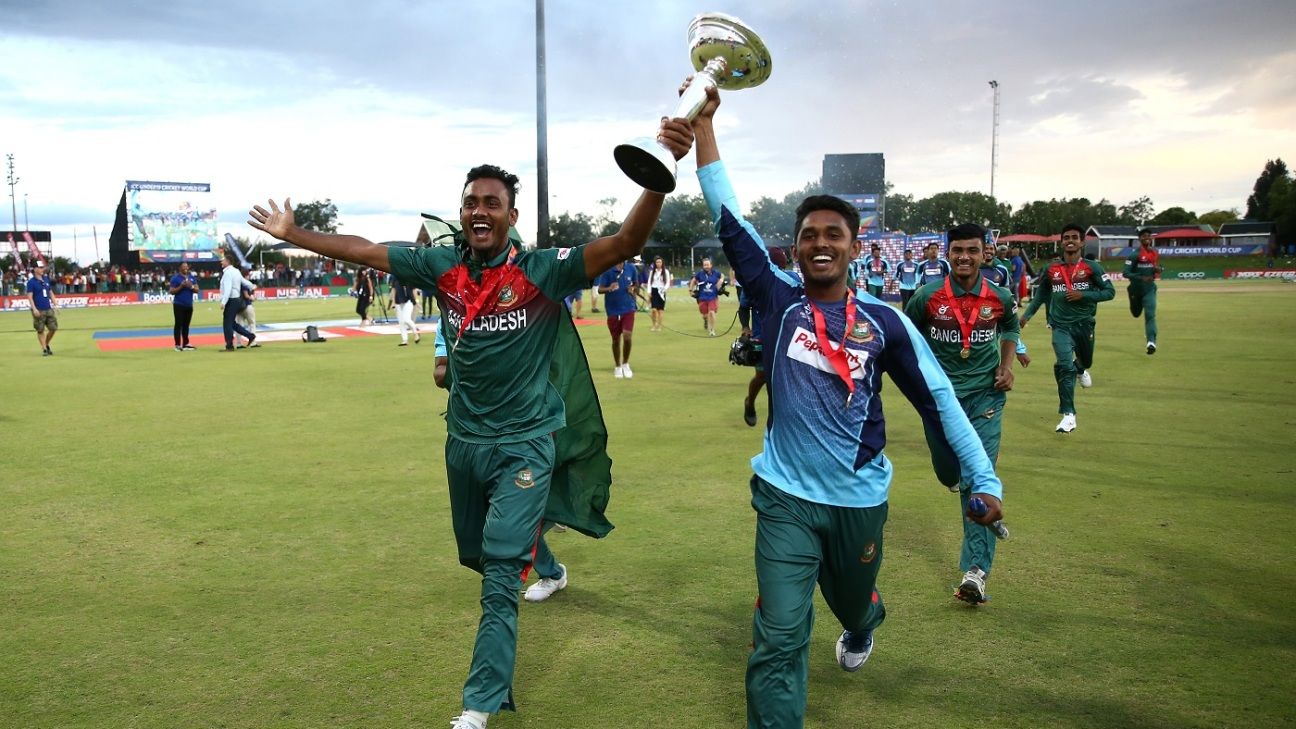 Bangladesh’s long wait for a maiden global title ended when Rakibul Hasan flicked Atharva Ankolekar over midwicket to seal their victory at the 2020 U-19 World Cup, ending a 20-plus-year-long search for a crown. But according to their captain Akbar Ali the victory has just set the ball rolling for the future greatness that will come Bangladesh cricket’s way. He felt that the win now sets these champion teenagers to be more successful when they eventually transition into the senior team.

Akbar also dedicated the World Cup win to the people in Bangladesh because of their continuous support, irrespective of what results the team has brought in the past.

“This is the stepping stone for our future cricket,” he said. “And this is just the beginning. We need to keep the momentum and the hungriness when we go to the senior side.”

“The way the Bangladeshi people supported our cricket team, they deserve a world title,” he said. “We are very happy to deliver that. Bangladesh cricket supporters always back us. When the team is down, we get as much support from the public, so when we have won, all the more they deserve this.”

ALSO READ: Akbar Ali, and a slice of Bangladesh history

It’s not very often that Indian fans get outnumbered in any cricket game, but at the final in Potchefstroom, there were many more Bangladesh fans than those from across the border. Akbar said they were the team’s 12th man in their victory. He also said that India-Bangladesh rivalries bring out the best from the team.

“Yes, we expected a good crowd, but expected an even crowd,” Akbar said. “We were surprised by seeing more Bangladeshi people, so big thanks goes to them.

“India-Bangladesh rivalries brings out the best in us. Before the World Cup final, we had lost the Asia Cup final to them, so the boys wanted to take revenge.”

Overwhelmed by the emotion of the win, Akbar said the fact that they are world champions had not yet sunk in. But one thing he confirmed was that this was always the goal. Anything lesser at the 2020 U-19 World Cup, and they would have left dissatisfied.

“When we started our journey, 1.5 years back, we had a dream,” Akbar says before correcting himself. “Not a dream, but a goal. We knew we had it within ourselves when the group was formed. So to reach the final and lift the trophy, it’s a dream come true for us. Can’t describe my feelings.”

After their win, the Bangladesh players attended a prayer service before resuming their celebrations in the dressing room. In Dhaka, Sylhet and Chittagong, fireworks have already lit up the skies. And as the evening continues, the festivities at Potchefstroom within the Bangladesh camp will also go long into the night.

Hillis out of hospital 2 weeks after water rescue
What to do with Dak Prescott: Three options the Cowboys must consider
‘Speechless’ Linette upsets No. 4 Garcia at Aussie
‘We had a bad day’: No. 1 Houston falls to Temple
Tszyu to face Harrison for interim title in March