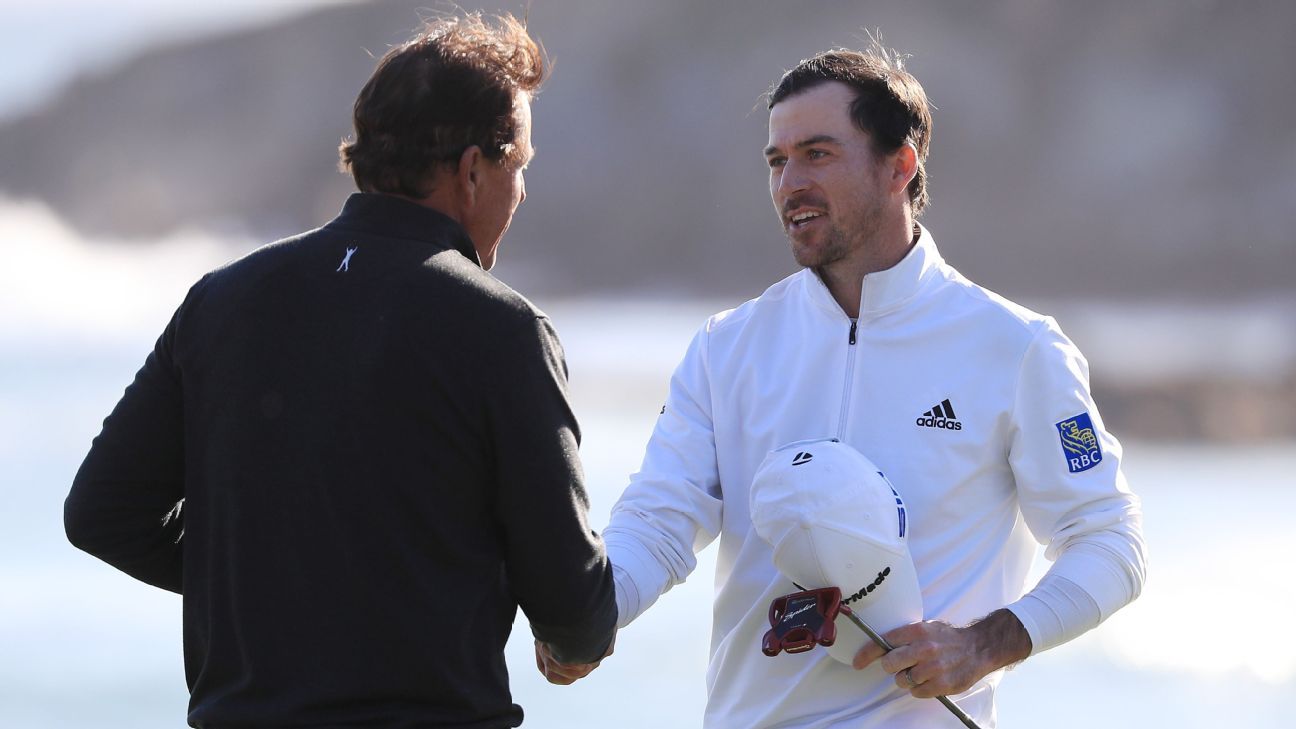 PEBBLE BEACH, Calif. — Nick Taylor knew the odds were not in his favor Sunday at Pebble Beach.

Already nervous about facing Phil Mickelson for the first time with only a one-shot lead, Taylor found himself watching Lefty’s short-game-highlight show on the eve of their final-round pairing at the AT&T Pebble Beach Pro-Am.

“I was just curious, to be honest. And he hit some amazing shots,” Taylor said. “I’m like, ‘Well, I don’t know if he can keep that up. If he can, great.’ But if I keep doing what I’m doing, plugging along … then try to make the guys behind me try to beat me.”

Taylor created his own short-game highlights for a victory that will stay with him a long time.

He holed a bunker shot for eagle that carried him to a five-shot lead at the turn. And when that lead shrunk to two shots in 40 mph gusts, Taylor chipped in for a birdie on the 15th hole that all but sealed it.

Turns out Taylor had more trouble with the wind than Mickelson did, and the Canadian managed both just fine. He never lost the lead, and closed with a 2-under 70 for a four-shot victory over Kevin Streelman.

Mickelson, going for a record sixth time at the Pebble Beach Pro-Am, faded to third with a 74.

“It’s disappointing certainly to have not won, but I got outplayed,” Mickelson said. “I mean, Nick played better than I did. He holed a couple of great shots. That eagle on 6, the putts he made on 4, 5 and 7 … he just really played some great golf.”

The rewards were more than Taylor could digest.

He won in his fourth start as a PGA Tour rookie at the 2015 Sanderson Farms Championship in Mississippi, at the time an opposite-field event that didn’t feature any of the top players. He went 146 starts on the PGA Tour until his next victory, and it was a big one.

“That was amazing,” Taylor said. “I believed I could do it because I’ve done it before. But to do it in that fashion, playing with Phil, gives me a lot of confidence going forward.”

The victory gets him into the Masters for the first time, along with the PGA Championship up the coast at Harding Park in May. In his sixth year on tour, the 31-year-old Canadian has played only two majors as a pro.

One of those was last summer at Pebble Beach, after which Taylor announced he and his wife, Andie, were expecting their first child. They were waiting for him beyond the 18th green at Pebble.

“You couldn’t write it much better,” Taylor said.

The final chapter was more than five hours of jumbled emotions. Taylor figured he would have been more nervous with a larger lead at the start, and then he had one in the middle. He regained the lead with a 15-foot birdie on No. 4, matched birdies with Mickelson on the par-3 fifth, holed the bunker shot on the par-5 sixth to seize control and made a 7-foot birdie on No. 9 to head to the back nine with a five-shot lead.

Mickelson contributed to Taylor’s advantage, going long over the eighth green and chipping so strong that it caught the slope and rolled back to the fairway, leading to double bogey. He made bogey on No. 9, a two-shot swing.

And then the wind arrived, so strong that it was hard work to make bogey. Mickelson chipped away with a birdie at No. 10 and two pars, and he picked up another shot with a bogey on the par-5 14th, where the wind was so strong it blew Taylor’s cap off his head as he faced 227 yards to the green — for his third shot.

Taylor made double bogey. The lead was two with four holes to play.

“I had to remind myself I still had the lead, I knew I was swinging it well and just needed to hit that fairway,” Taylor said.

He came up short of the green but had a simple chip that turned out perfectly and dropped for birdie. His final act was an 8-iron to 6 feet for birdie on the 17th.

Taylor finished at 19-under 268 and earned a two-year exemption, valuable for a guy who has been fighting to keep his card the past few years.

Mickelson wasn’t the only player who struggled. Dustin Johnson shot a 78. Matt Every, in the third-to-last group, shot 80. Jason Day closed with a 75.

The best round and best finish belonged to Jordan Spieth, who chipped in to save par on his final hole for a 67. It was the low round of the day and enabled Spieth to finish in a tie for ninth. That narrowly moves him back into the top 50 and makes him eligible for a World Golf Championship in Mexico City in two weeks.

Streelman also leaves with a trophy. He teamed with Arizona Cardinals receiver Larry Fitzgerald to easily win the pro-am for the second time in three years.