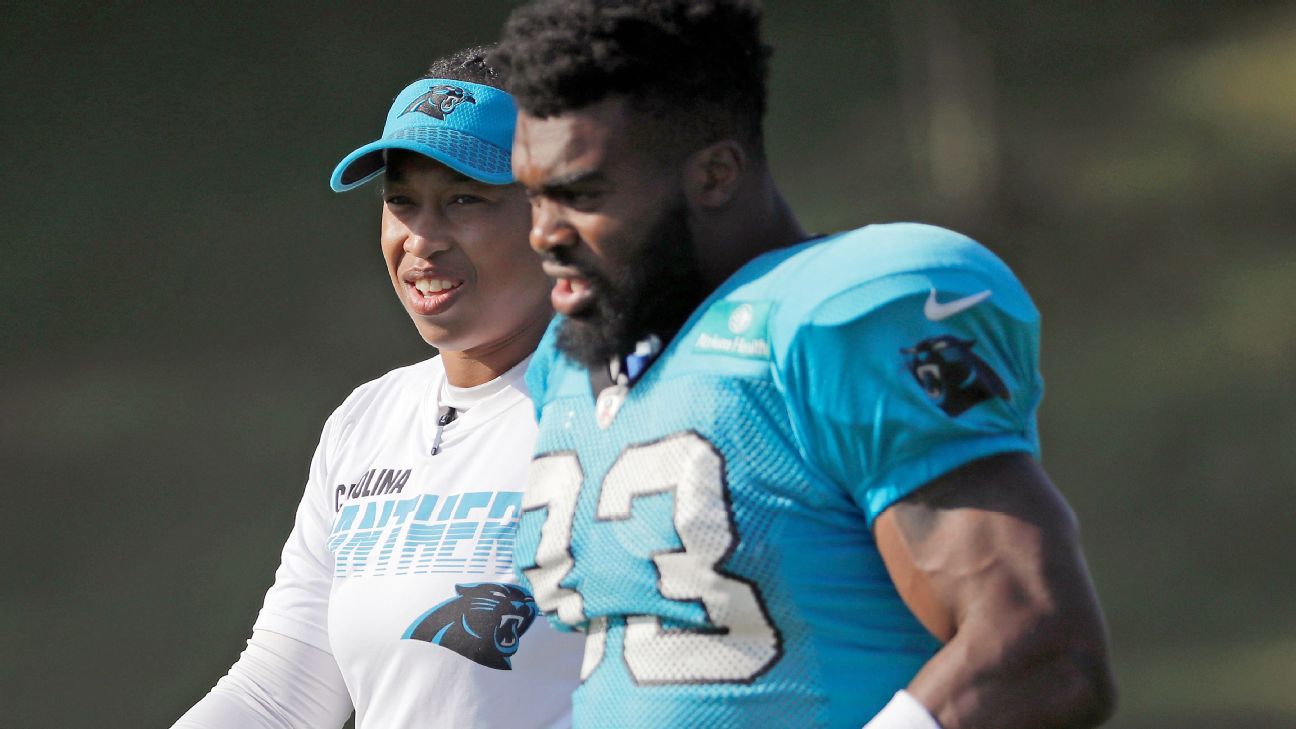 King would join the staff as an offensive assistant, a source told ESPN’s David Newton.

Redskins coach Ron Rivera hired King as a wide receivers coaching intern in Carolina the past two summers. She was also an offensive assistant with Dartmouth College this past fall.

The Athletic first reported that the Redskins are working to hire King.

Multiple sources said she met with members of the organization before the Super Bowl. The Redskins hired Rivera in January.

King previously coached the Johnson & Wales University women’s basketball team, guiding it to a Division II championship in 2018. She also played for the New York Sharks in the Women’s Football Alliance and served as an assistant receivers coach for the Arizona Hotshots in the Alliance of American Football.

King first met Rivera in 2016 at an NFL Women’s Careers in Football Forum. Rivera told ESPN in 2018 that he can envision a day when a woman becomes a coordinator or even a head coach.

“Part of it, it’s all about the fan base,” Rivera told ESPN at the time. “It’s also knowing the moms out there that understand the game. It’s important because they really do control as to whether their kids are going to play. This is something that has to be developed.

“It helps us in a lot of ways. It also shows everybody deserves an opportunity.”

Last year at a Women’s Careers in Football Forum, Rivera said that female coaches were “an untapped source. There’s a lot of forward thinkers in this room. We’re in a production-based business. It’s all about winning, and we’ve got to create that opportunity to win. It doesn’t matter who you are — if you bring something special to the table and help us, we most certainly want you.”

During her time in the AAF, King helped coach former Redskins receiver Rashad Ross, who is now playing for the D.C. Defenders of the XFL.

“[King’s] knowledge of the game was impressive,” Ross told ESPN last year. “It’s a double standard when it comes to sports with females and men.”

Ross said he felt King could relate to the players because of her own playing days and her coaching ability.

“When things weren’t going right, she was good at keeping my head in the game and understanding it.”

Collette Smith became the NFL’s first African American female coach in 2017 when she was an intern with the New York Jets, assisting defensive backs coach Dennard Wilson for the summer.

“Ultimately, I’d like to be an offensive coordinator at the college or NFL level,” King told ESPN in 2018.

She also said she’d like to serve as a role model.

“For the little girls, that’s just what I want for them: To let them know, if this is what they want to do, they can do it.”