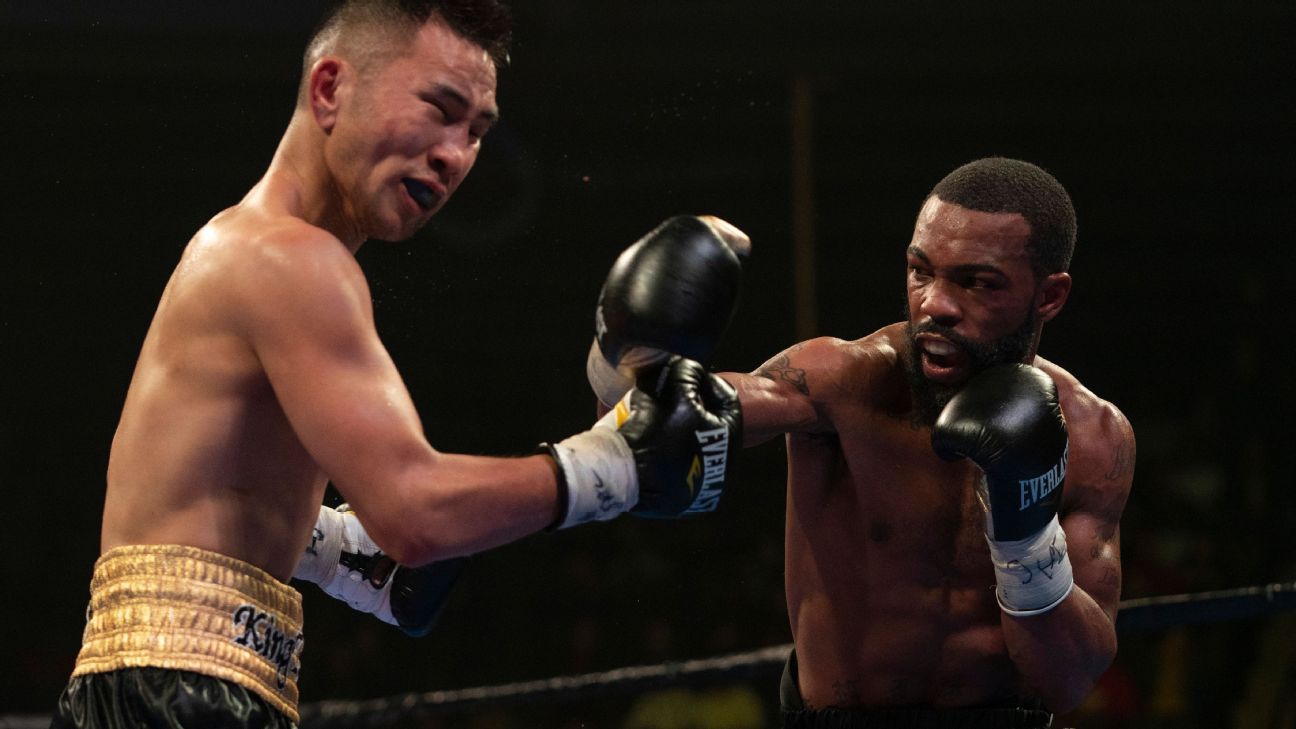 Featherweight world titlist Gary Russell Jr. came off yet another long layoff and yet again dominated.

Russell retained his 126-pound belt for the fifth time — each in dominating fashion — as he won a spirited, unanimous decision over mandatory challenger “King Tug” Tugstsogt Nyambayar in the main event of a Showtime tripleheader on Saturday night at the PPL Center in Allentown, Pennsylvania.

“We put the work in every day in the gym. I’m a perfectionist,” Russell said. “We knew we had a very tough opponent, and I knew he was going to bring his physical best. He had everything to gain and nothing to lose. We just focused and showed I’m one of the longest reigning [current] champions for a reason.”

Russell won by scores of 118-110, 117-111 and 116-112 in what could be his final fight in the division. He said before the fight, and again afterward, that he might move up, perhaps two divisions to lightweight, because he claimed he has been unable to get bigger names into the ring.

“If we have to move up in weight for these top fighters to feel like they have an advantage and take the fight, then we’ll do it,” said Russell, who added he wanted to fight junior lightweight titlist Leo Santa Cruz and have a rematch with unified lightweight champion Vasiliy Lomachenko, who handed Russell his only defeat in a vacant featherweight title bout in 2014.

Russell was fighting for the first time in nine months and for only the sixth time since 2014, having boxed just once in each calendar year from 2015 (when he won his world title) to 2019 but with the promise — as usual — to fight more often this year.

“We never take a day off. I’ll probably be back in the gym next week,” he said. “We’ll keep our wheels turning and stay sharp.”

It was a fast-paced fight from the outset, with the southpaw Russell (31-1, 18 KOs), 31, a 2008 U.S. Olympian from Capitol Heights, Maryland, going early and often to his rapid-fire jab and Nyambayar coming forward looking to land his powerful right hand.

But Nyambayar (11-1, 9 KOs), 27, who claimed a 2012 Olympic silver medal for Mongolia but did not turn pro until 2015, struggled to land his punches. Trainer Ismael Salas was all over him after the fourth round. He begged him to throw more punches, and Nyambayar tried to respond. But Russell is gifted defensively, and he avoided many of Nyambayar’s shots with movement and speed that kept him off balance.

There were good exchanges in the seventh round, but Nyambayar still could not connect solidly. In the eighth round, it was Russell who found a home for his combinations, but Nyambayar never stopped going forward and finally broke through with some combinations in the 10th round, his best of the fight. They exchanged several hard shots in the 11th and 12th rounds, but it was Nyambayar, who trains in Las Vegas and was coming off a 13-month layoff, who closed more impressively, though the fight was already out of reach without a knockout.

“It wasn’t my night. He was the better man tonight,” Nyambayar said through an interpreter. “I didn’t do my work the way I was supposed to. He is a great champion who fought a great fight. I made a mistake by waiting for him during the fight. I’d love the rematch if I can get it.”

According to CompuBox, Russell landed 134 of 867 punches (15%) and Nyambayar 122 of 707 (17%). It was Russell’s activity that seemed to make the difference, as he threw 72.3 punches per round as compared to Nyambayar’s 58.9. Russell also landed more punches than Nyambayar in eight of the 12 rounds.

“The difference was ring generalship, hand speed and boxing IQ,” Russell said. “He only had 11 pro fights. Of course, he was an Olympic silver medalist, but he only had those 11 pro fights. I’ve had over 30, and I think my experience was enough to overcome and win this fight.”

Lineal junior featherweight champion Guillermo Rigondeaux moved down to bantamweight and eked out a split decision in a snoozer against Liborio Solis to win a vacant secondary world title. The win made Rigondeaux a two-division titleholder and at age 39 the oldest fighter to win a 118-pound belt.

“Our team is with me more than their own families. This isn’t just my victory, but it’s a victory for my whole team to get me this win at this age,” Rigondeaux said through an interpreter.

“I thought I won the fight,” Solis said through an interpreter. “Going backwards is no way to win a vacant title. I put the majority of the pressure on him. I’m not going to argue with the judges, but I thought I did enough to win.”

Solis (30-6-1, 14 KOs), 37, a Venezuela native fighting out of Panama and making his United States debut, was on the offensive from the outset. Solis rattled Rigondeaux with a left hook and a right hand, forcing him to hold on in a first round in which he landed a surprisingly high 28 punches against an opponent known as a defensive master. But from there on, Solis did almost nothing. Rigondeaux barely did anything, either.

At his age and having had more than 400 amateur fights, Rigondeaux’s legs are not what they once were, so he has not been able to move like he typically has. But he is smart and fought in spurts, doing his best box-and-move as he slowed the pace from the second round on, leaving the crowd to boo throughout the fight because of its utter lack of action.

After the sixth round, Rigondeaux’s trainer, Ronnie Shields, implored him to engage more, and Rigondeaux (20-1, 13 KOs), a two-time Cuban Olympic gold medalist fighting out of Miami, obeyed. In the seventh round, Rigondeaux, a southpaw, finally went forward and landed a left uppercut that stunned Solis and two more left hands that knocked Solis into the ropes, which held him up and caused referee Benjy Esteves to rule a knockdown. Rigondeaux staggered Solis again in the follow-up attack with another left hand.

“Liborio is an excellent fighter. I just saw the opportunity to strike and scored the knockdown,” Rigondeaux said.

As Solis said, “The punch surprised me on the knockdown, but I wasn’t hurt. I was ready to fight immediately right after.”

He rocked him again with a straight left hand early in the 10th round but could not capitalize and reverted to his safety-first style.

Before the 12th round, Solis’ corner told him he needed a knockout to win, but there was little urgency. And Rigondeaux also did almost nothing as the crowd jeered to the end.

The fight was originally scheduled to take place Dec. 21 but was postponed because former junior bantamweight world titlist Solis could not get a visa in time to enter the United States.

In the opening bout, Jaime Arboleda survived a 12th-round knockdown to eke out a split decision victory over Jayson Velez in an action-packed junior lightweight world title elimination fight. Two judges scored the fight 114-113 for Arboleda, and one judge had it 115-112 for Velez, whose three-fight winning streak came to an end.

“Jayson Velez is a great fighter and has a great style. He was trying to use that to break me down,” Arboleda said. “Velez has faced a lot of good fighters, and I believe I belong with those fighters. I had him hurt badly a few times, but I just got a little bit ahead of myself and didn’t finish.”

Arboleda won his sixth fight in a row since his lone loss to Recky Dulay in July 2017, and it was a very tough assignment as former featherweight world title challenger Velez nearly stopped him.

A right hand from Arboleda at the start of the fifth round also did damage against Velez, who might have been a bit sapped from needing three tries to make 130 pounds at the weigh-in on Friday.

They traded clean shots over the course of the fight, with both guys taking as well as they were giving.

An accidental head-butt in the ninth round opened a cut over Velez’s right eye as Arboleda went past nine rounds for the first time. Velez landed many combinations and power punches in a big 10th round to back Arboleda into the ropes.

It seemed clear that Velez needed a knockout to win in the 12th round. That is what Arboleda’s trainer, Herman Caicedo, told his fighter after the 11th round. And Velez’s corner also told him that he needed a stoppage, and Velez nearly got one.

Velez took heed and stormed after Arboleda and finally landed a heavy overhand right to knock him down with about a minute left. Arboleda tried to hold, but Velez shook free and continued to pound his opponent for the rest of the fight in a desperate attempt for the knockout.

“It was a clean shot on the knockdown, but it happened because I wasn’t doing what I was supposed to stylistically and with my footwork,” Arboleda said. “I was a bit tired, but I wasn’t too hurt. I went right back to fighting.”

“It was a close fight, but I think I won the fight,” Velez said. “It could have gone either way. I think I knocked him down twice, but they didn’t count one of them. It’s OK. I showed that I’m a warrior like always. I have six losses now, but I’ve never been knocked out. I’m still here, and I believe I’ll be world champion someday.”