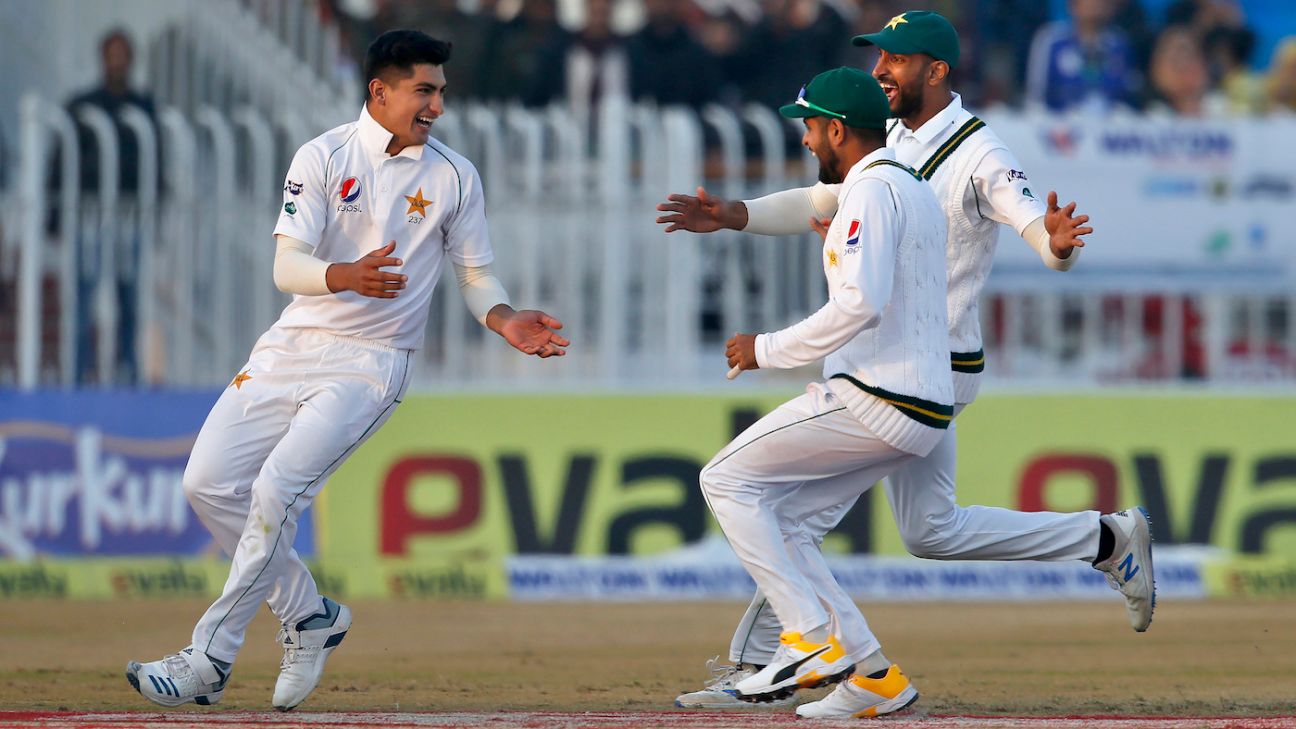 Naseem Shah, the 16-year-old Pakistan fast bowler, became the youngest player to take a Test hat-trick when he dismissed Najmul Hossain Shanto, Taijul Islam and Mahmudullah on the third day of the first Test against Bangladesh in Rawalpindi. Shah’s feat saw him surpass the former Bangladesh legspinner Alok Kapali, who held the record for nearly 17 years, having taken a Test hat-trick against Pakistan in Ausust 2003, at the age of 19. ESPNcricinfo’s ball-by-ball commentary recorded how Shah’s accomplishment came about:

40.4 Naseem Shah to Najmul Hossain Shanto, OUT, huge appeal for lbw, Pakistan are very interested. Azhar checks with the bowler, keeper and signals for a review. This one came back in a long way to hit Shanto on the right thigh pad or thereabouts. The height may be the only bone of consideration here. And what a good review it is, ball tracking confirms this would’ve crashed into leg stump. Measured call to take the review. It wasn’t impulsive, they all collectively felt it was worth a shout and boy, have they been proved right or what? Right at the fag end of the day. This will lift Pakistan just as Bangladesh were beginning to dream of wiping out the deficit with not more than two down.
Najmul Hossain Shanto lbw b Naseem Shah 38 (87b 3×4 1×6) SR: 43.67

Out comes Taijul, the nightwatchman

40.5 Naseem Shah to Taijul Islam, OUT, full, straight and gone! What a ball from Naseem. Make that two in two. This was angled back in from wide of the crease, the ball veered in late to beat the inside edge and hit him low on the pad. Naseem didn’t even bother appealing. Nigel Llong sent him on his bike almost immediately.
Taijul Islam lbw b Naseem Shah 0 (1b 0x4 0x6) SR: 0.00

Naseem Shah on a hat-trick. Mahmudullah comes out at No. 6. What did Bangladesh achieve by sending in a nightwatchman? The man who they wanted to protect has to face the hat-trick ball. Two slips and a short cover. Short leg, short midwicket. Here we go

40.6 Naseem Shah to Mahmudullah, OUT, edged and gone! Naseem has done it. Hat-trick! He has lit up this Test and how. Joy in the Pakistan camp. He bowled this full and wide. This was there for the drive even though the ball moved away just a little, Mahmudullah couldn’t hold back but was late on the shot. Got a thick edge that flew low but Haris pouched it superbly. He needed to stay low, moved instinctively to his right to pluck that. What a find this Naseem Shah is.
Mahmudullah c Haris Sohail b Naseem Shah 0 (1b 0x4 0x6) SR: 0.00