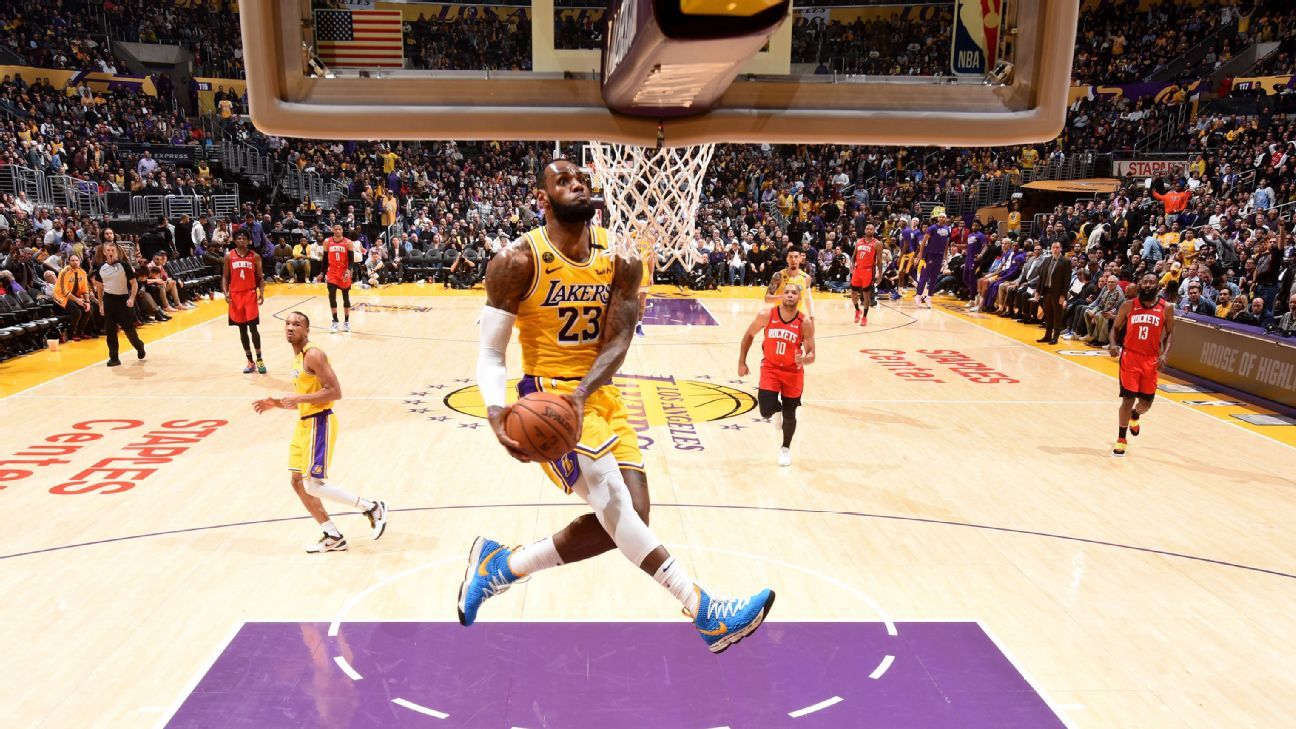 SAN FRANCISCO — The Golden State Warriors honored Kobe Bryant, his daughter Gianna and the seven other victims of the horrific helicopter crash in Calabasas, California, on Saturday, but after the game, the Los Angeles Lakers were still talking about LeBron James‘ unintended tribute to Bryant with his breakaway dunk in Thursday’s game against the Houston Rockets.

The slam by James, a double-clutch reverse off an outlet pass from Avery Bradley, appeared to be a carbon copy of a dunk that Bryant threw down on Nov. 18, 2001, against the Sacramento Kings — from the approach to the launching spot to even the side of the court at Staples Center being the same.

“Ever see the movie ‘The 6th Man’?” James asked after the Lakers’ 125-120 victory over the Warriors. “Kobe came down, put himself in my body and gave me that dunk on that break.”

The movie James was referring to, released in 1997, starred Marlon Wayans and Kadeem Hardison as brothers on the University of Washington men’s basketball team. Hardison’s character, Antoine Tyler, dies of a heart attack during a game, and his ghost comes back to help out his brother Kenny Tyler, played by Wayans, and the team.

James said while he saw Bryant complete that dunk countless times during his 20-year career, he was not planning on mimicking the dunk going into the Houston game.

“I didn’t really predetermine that either until I jumped,” James said. “I just jumped and kind of figured it out and then … it’s crazy how it’s the same exact dunk, the same exact hoop that Kobe did [it on], what, 19 years ago or something like that? That was nice.”

Josh Williams, a member of the Lakers videography team, noticed the parallel between the plays and spliced them together on the Lakers’ Twitter account. The post has already amassed more than 23 million views.

“Our great social media team put that together and I was like, ‘That’s really, really good,'” James said.

“It was pretty dope,” McGee said. “It was extremely accurate and damn-near identical. That was pretty cool. … That’s really some legendary stuff right there.”

James said he watched clips of his son Bronny’s Sierra Canyon High School’s pregame warmups before they played Long Island Lutheran on Saturday and was delighted to see Bronny pull off the same dunk.

“Kobe is in all of us right now,” James said.

As much as the video compilation was meaningful to James, he was perhaps even more taken aback by the still image of the dunk captured by NBA photographer Andrew D. Bernstein.

“When I saw it for the first time, I was like, ‘Holy s—, that is an unbelievable photo,” James said. “And then when I found out how it was taken, Andy literally had one snap on his remote to get that, and when I saw the video of it, when I was in the air, you can see the flash in the background. I was like, ‘Oh, that is … He’s the real MVP, for sure.”

In the photograph, which James shared on his Instagram account, Bernstein can be spotted sitting down on the far baseline behind James, triggering the remote lens at the precise split second that James is ascending towards the hoop with his legs crossed.

“That moment, it’s like I’m walking on air,” James said.

James said his mother, Gloria James, was at the game and wants to print the photo and frame it in her house along with the other mementos she’s collected throughout her son’s career.

James said he will frame it and hang it up in his house as well.

“It’s crazy, it’s crazy,” James added. “To now [have it] be a part of my history between that correlation between me and Kobe, that play, I think it’s pretty, pretty, pretty awesome. I’m glad I did it in a Laker uniform. …”