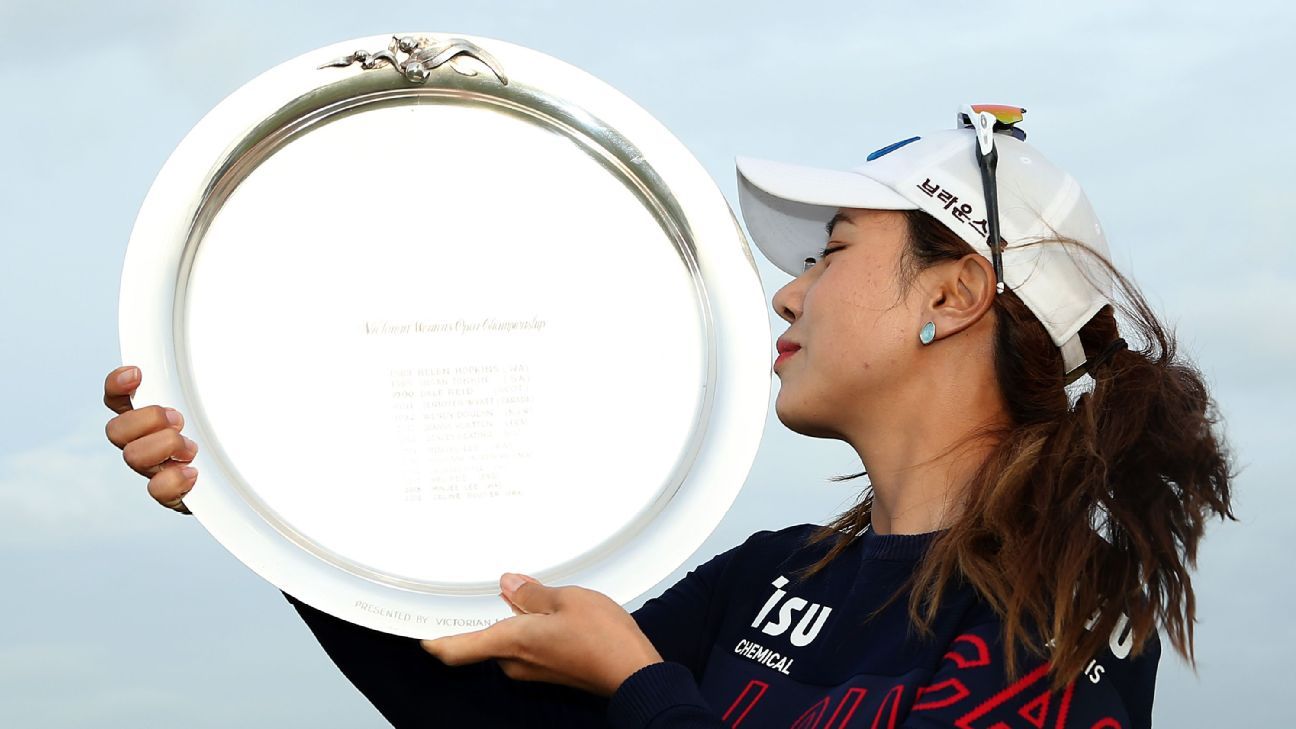 Unheralded Hee Young Park has come up trumps in an all-Korean playoff to win the $1.5 million women’s Vic Open at 13th Beach.

World No.191 Park claimed the biggest victory of her career at the fourth playoff hole when Hye-Jin Choi self-destructed.

Choi’s drive off the 18th tee sailed wide right and ended up nestled against a pine cone.

She then hit her third shot into an unplayable lie and was forced to take a one-shot penalty.

Park’s regulation par was more than enough for her to claim the victory.

She said she almost gave golf away in 2019 after the worst year of her career before deciding to have another crack.

“I had a chance to play another year this year, so I never stopped,” said the 32-year-old.

“I think God just gave to me this present.”

Fellow South Korean So Yeon Ryu, a two-time major winner and former world No.1, was eliminated at the second playoff hole.

The trio had all finished the 72-hole tournament at eight-under 281, with Choi the big mover on Sunday with a three-under 69 in difficult windy conditions.

Two-time Vic Open winner Minjee Lee (73), Robyn Choi (71) and fast-finishing Su Oh (68) were the best Australians in a tie for sixth at six-under.

Oh’s round of four-under was the lowest of the day.

For once, Minjee Lee had to take a back seat to her younger brother Min Woo Lee, who claimed his first professional victory in the men’s Vic Open.

She now shifts her focus to next week’s Women’s Australian Open at Royal Adelaide.

“To be honest today I don’t think I was ever quite there in contention, it was a little up and down,” said Minjee Lee, who started the day five shots off the pace.

“The Aussie Open is a big one for me as well, so I’m really excited to go over there.

“I feel like I’m going in with pretty good form so hopefully I can have a good score.”

Overnight leader Ayean Cho from South Korea plummeted down the leaderboard after a horror stretch midway through the round when she dropped seven shots in the space of six holes.

The teenager finished in a tie for 16th at three-under after closing with an 81.

Cards acquire LHP Misiewicz from Royals for cash
Six Nations Review: England and Wales rebuilds off to slow start
‘Life puts you in great situations’ – Zaire Wade on why he chose Cape Town Tigers
The Bulls enter the NBA trade deadline at a crossroads
Navarrete wins back-and-forth slugfest vs. Wilson