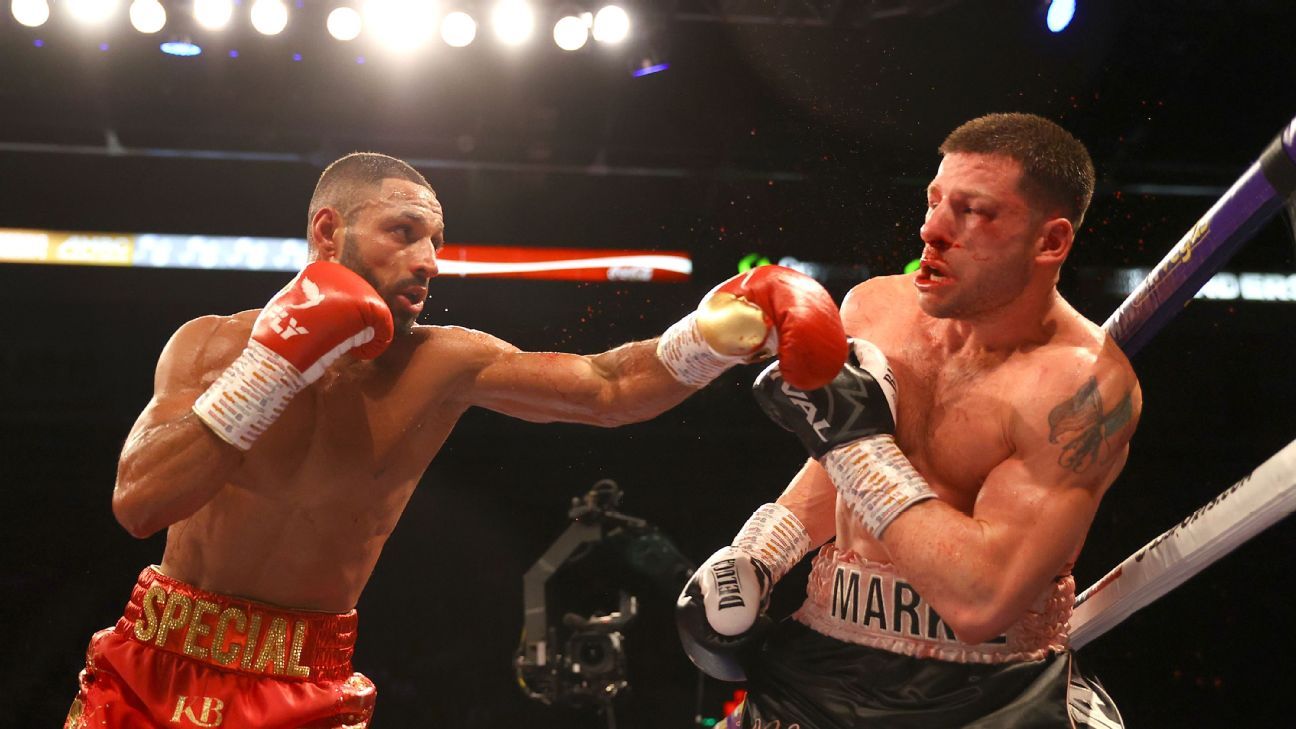 Kell Brook returned to form and kept his career alive with a seventh-round knockout win over Mark DeLuca on Saturday.

The former IBF world welterweight champion patiently dismantled DeLuca, flooring him in the third round before a clinical left-hand finish in a super-welterweight bout at the Sheffield Arena, Yorkshire, England.

Brook (39-2, 27 KOs), 33, insisted he would immediately retire if he could not produce a convincing win in front of his home city fans, and this win propels him towards a bigger fight later this year.

DeLuca (24-2, 13 KOs), 31, from Massachusetts, battled bravely from the third round, but he never threatened Brook.

“I had to chip away at him and it was a clinical finish,” Brook said. “You are always questioning yourself, but I believe in what I’ve been doing in the gym. I’m in a new kid, a different person. This is last chance in my career. 2020 is the year I become champion again. I felt very comfortable in here at this weight. I took my time.”

Brook made three world title defenses from 2014 to 2017, but Gennadiy Golovkin — up at middleweight — and Errol Spence stopped him in 2016 and 2017 respectively, and the Briton suffered broken eye sockets in both fights.

Brook then did not box at all in 2019 after two non-title bouts in 2018, and his career desperately needed this lift against DeLuca.

Brook has said he wants to face American Spence (26-0, 21 KOs), the WBC-IBF welterweight champion, later this year, but making welterweight is beyond him now and English super-welterweight rival Liam Smith is a more realistic target for 2020.

Smith, a former WBO world super-welterweight titleholder, was a ringside spectator and that fight, possibly in an eliminator for the WBO belt, is more realistic for Brook than a rematch with Spence.

“Liam, of course, it does interest me,” Brook said. “I’ve got a lot of respect for Liam, I’ve sparred him, and if that’s anything to go on the fight will be amazing.”

After 14 months since his last fight, a humdrum points win over Michael Zerafa, Brook made a steady rather than storming start but the punches began to flow in the third round.

Brook let fly with a flurry of hooks, and it was a left hook that sunk DeLuca to his knees for a count in the third.

DeLuca, blood streaming from his nose, got up and bravely withstood what Brook dished out for the rest of the round.

For DeLuca, this was his first world title shot after nearly 13 years in his career, which was interrupted by a spell in the United States Marine Corps in Afghanistan, as well as injuries. He stubbornly kept himself in the fight, but was saved by the bell at the end of the fourth round.

Brook showed a steady rhythm and sharpness that was lacking in his previous outing, and DeLuca took a battering against the ropes in the sixth round.

Brook then landed the best punch of the fight, a chopping left hook to the chin that left DeLuca flat on his back, keeping Brook’s career alive.

Kid Galahad booked himself a second shot at the IBF world featherweight title after dominating Claudio Marrero, who was retired by his corner at the of the eighth round on Saturday.

Victory in the title eliminator clinched a shot at the IBF belt, held by Galahad’s English and Yorkshire rival Josh Warrington who beat him on a split decision in June last year.

A rematch is not something that appeals to Warrington, who may opt to give up the belt rather than face Galahad again. What ever Warrington decides to do next, Galahad is looking forward to a second shot at glory.

“I knew I had to bring my A-game,” Galahad said. “After last time I can’t leave anything to the referees. Claudio Marrero is in the top 10 featherweights in the world and to do that to someone like him is something.”

Qatar-born Galahad (27-1, 16 KOs), 29, from Sheffield in England, made the busier start but was warned for use of the forearm at the end of the first round, and again in the second.

Marrero (24-4, 17 KOs), 30, from the Dominican Republic, calls himself “The Matrix” — but Galahad did not find it difficult to locate him all fight.

Galahad, whose real name is Abdul-Bari Awad and was given his ring name after a 1962 film featuring Elvis Presley, found more openings, landed more and had a confidence about him in the first half of the fight.

Galahad disrupted Marrero with his holding and standing on the southpaw’s front foot throughout the fight. But Galahad also outboxed Marrero at times, such as the fifth and sixth rounds, when he switched stances and did not let Marrero settle as he pumped out the jab.

Marrero was in trouble in the seventh when Galahad landed a series of shots flush to the head, and he looked disheartened.

After eight rounds, Marrero’s corner had seen enough, and pulled him out.

Terri Harper won the WBC world junior lightweight title in only her 10th professional fight, after earning a unanimous points win over Eva Wahlstrom on Saturday.

Wahlstrom (23-2-2, 3 KOs), 39, who is a big star in her native Finland, lost the belt in a sixth defense after being given a count in the seventh round, and was also wobbled in the eight round.

“The timing was right,” Harper said. “I had a lot of pressure on me, I’m 23 years old and I’ve just made history.”

Harper, from Doncaster not far from Sheffield, had too much energy for Wahlstrom as youth trumped experience.

To put Harper’s win in perspective, Wahlstrom’s only other defeat was to Katie Taylor, women’s boxing’s standout star last year, via a unanimous points win in December 2012.

The taller Harper boxed well throughout, as she utilized her reach, while Wahlstrom preferred to wait for her chances on the counter attacks.

Harper did most of the attacking. In the seventh round, Wahlstrom was given a count after the Englishwoman landed a glancing right hand. Wahlstrom complained, and perhaps she lost her balance to touch down briefly after the effects of the blow to the temple.

But there was no question about a left hook hurting Wahlstrom in the eighth, and she finished the round on wobbly feet.