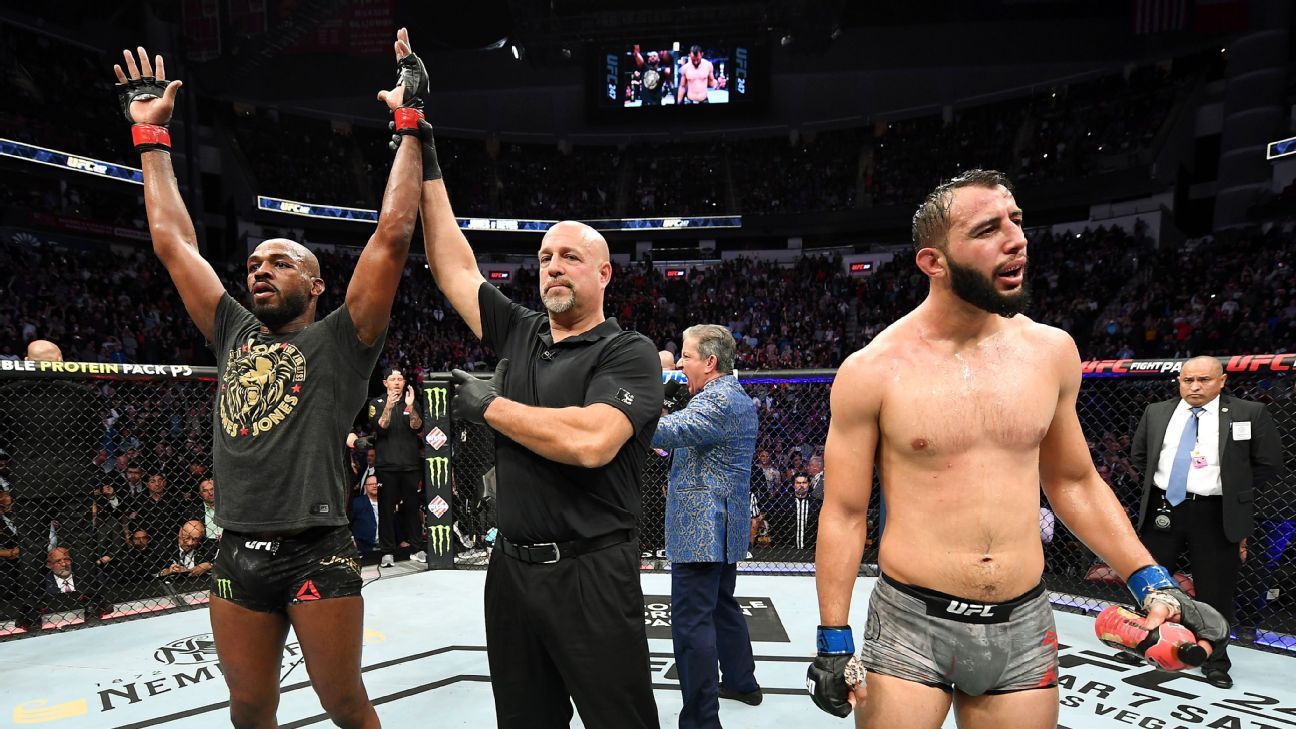 It wasn’t dominant and it wasn’t so pretty, but Jon Jones once again proved himself to be the greatest light heavyweight in the world. After 12 years in the sport, he’s done all he needs to do in order to be remembered as history’s gold standard among 205-pound fighters. It’s time for him to move on to bigger things.

And he knows it.

Jones would not commit to a move to heavyweight in his post-fight interview in the Octagon, after Saturday’s unanimous decision victory over Dominick Reyes was announced. But he did address that matter with an exhilarating message several days ahead of the fight, in an ESPN interview that aired early in the week. Ariel Helwani asked him if there’s a chance that his next fight might come at heavyweight, and Jones said, “There’s a really good chance.”

That was enough to get the heart racing, but Jones sent the pitter-patter into double time when he went on to call for a champion-vs.-champion superfight. “I feel like I really want to fight Stipe Miocic,” he said. “I feel like I could beat him.”

Maybe he can. Maybe he can’t. And that in itself makes this potential next move intriguing in a way we’ve never really experienced with Jones.

Has there ever been a doubt about the expected outcome in the leadup to a Jones fight? Sure, Reyes gave him all the fight he could handle at UFC 247 in Houston, but did anyone really expect that? Thiago Santos took Jones to a split decision back in July, and no one saw that close call coming, either. And there also was Jones’ struggles in his 2013 thriller with Alexander Gustafsson. But leading up to that fight, the most compelling argument anyone managed to make in the Swede’s favor was that he was tall.

Even way back in 2011, when Jones was 23 years old and just seven fights into his UFC run, he walked into the Octagon for his title challenge as the favorite. The champ at the time, Mauricio “Shogun” Rua, was a 10-year veteran and a one-time Pride Grand Prix winner with a deep list of conquests that included the man then considered the greatest 205-pounder ever, Chuck Liddell. Yet Shogun was an underdog that night, and then an ex-champion.

In all, Jones has fought 26 light heavyweights and been defeated by none of them. (The lone “L” on his resume was a disqualification in a fight he was thoroughly dominating.) “Bones” has cleaned out the division more than once. What more can he accomplish in the domain he has ruled for almost a decade?

Jones doesn’t owe it to the fans or the UFC to make this move up to heavyweight. He owes it to himself and his legacy.

Sure, Jones could opt to just take on the next man in line — Corey Anderson or Jan Blachowicz — while waiting for his money fight to come to him. Israel Adesanya has said he’s headed Jones’ way, and that would be a must-see collision. But Adesanya hasn’t yet defended his new middleweight belt even once, and he’s said that a Jones fight won’t happen before 2021. And that is fine, because “The Last Stylebender” is going to need time to bulk up enough to hang with a big 205-pounder like Jones.

Why should Jones wait, though? Why sit idly and allow Adesanya be the one making the bold move up to conquer a new world?

Jones made his name by fearlessly challenging himself, and nothing would fit that career narrative better than venturing into the land of giants.

Imagine if Jones were to take out Miocic, who has made a strong case for himself as the greatest heavyweight ever.

Imagine if Jones were to stand in front of Francis Ngannou and chop down the scariest fighter on the planet.

Curtis Blaydes. Jairzinho Rozenstruik. Maybe even that WWE ‘rassler Brock Lesnar. Wouldn’t you love to watch any one of them against Jones?

It wouldn’t even be out of the realm of possibility for Jones to complete his trilogy with Daniel Cormier at heavyweight — the only place where it would make sense. There’s no need for a third meeting at 205, where Jones beat DC twice. But stepping in with his bitter rival in the weight division where Cormier is at his best? Book it.

There are many alluring options laid out in front of Jones, waiting for him to declare himself ready to start conquering a new world.

That quest is what magnificent legacies are made of. Conor McGregor ensured his place in history with the perfectly timed left hand that knocked out the great Jose Aldo in 13 seconds. But it was the image of McGregor sitting atop the Octagon a year later, with two championship belts slung over his shoulders, that will resonate forever. The same holds true for Jones’s old friend Cormier as well as Amanda Nunes and Henry Cejudo, champ-champs all.

This is not to advocate for Jones joining the swelling ranks of double champs. We’ve seen the gridlock that comes with one person ruling two weight classes. That idea has been played out. Here’s hoping that Jones recognizes that moving up to pursue a new belt while letting go of the old one is no less of an achievement. Georges St-Pierre never reigned in two divisions simultaneously, but when he stepped up to middleweight and won the belt, it shined a new light on his legacy. Even Anderson Silva dabbling at light heavyweight during his long run as middleweight champ was a significant feather in his cap, despite him never going for the belt at 205.

Jon Jones already is an unmatched figure in this sport. He has done extraordinary things. Now it’s time for him to remind us of how special he is.

Rodgers to decide future during darkness retreat
Gamecocks suspend 3 for unspecified reasons
Better than Kareem, Wilt or Jordan? Where does LeBron James stand in the fantasy basketball pantheon?
Larkin hopes to stay in Detroit as talks continue
Vegas without Stone after another back surgery