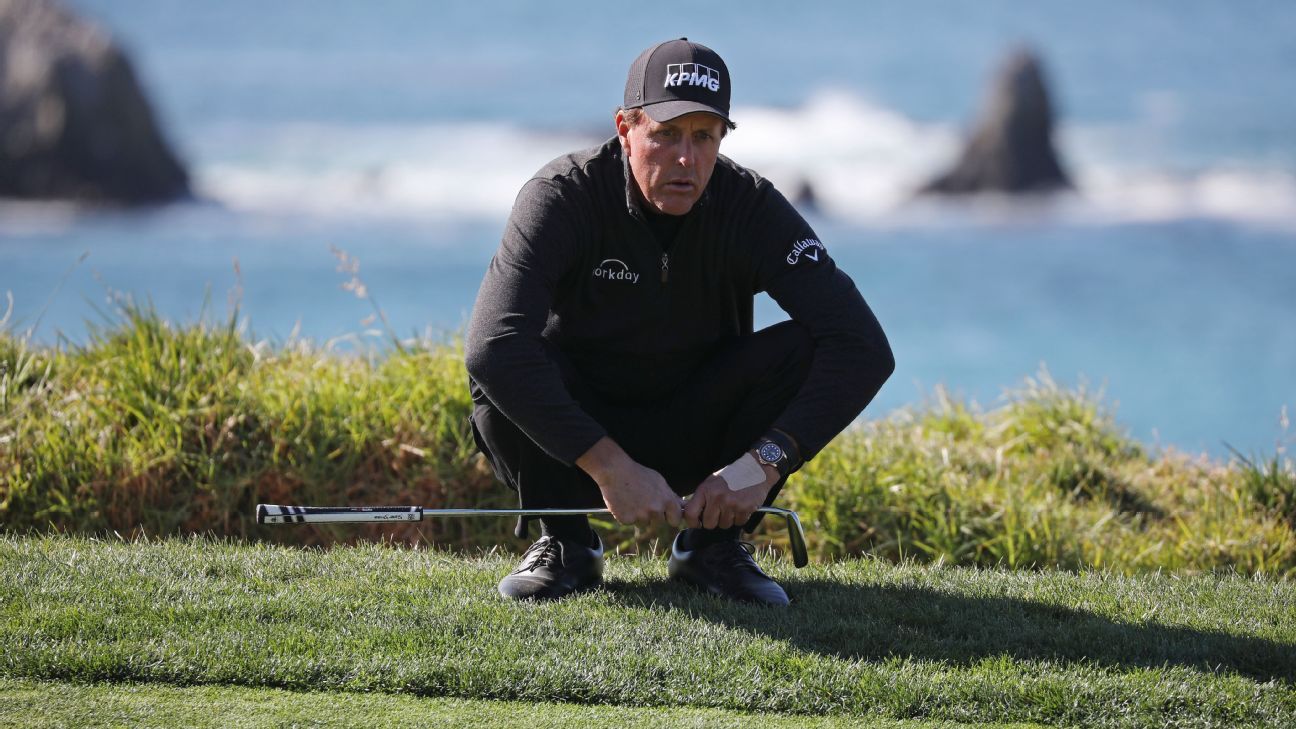 There are times when Phil Mickelson‘s game doesn’t match his talk. Example: most of the last year.

Whether it be boasting about hitting “bombs” or roasting others on Twitter, there’s been a fair bit of bluster coming from the Hall of Famer, his game falling short of the grandiloquence.

Even as recently as a few weeks ago, when Mickelson was lamenting consecutive cuts to start the new year for the first time in his career, he talked as if his game was close, despite evidence to the contrary.

Phil didn’t win at Pebble Beach on Sunday — and there was a fairly typical “Phil being Phil” moment on the eighth hole — instead he finished third at a place in which he won just two years ago, says something about his resiliency.

And to do it during the same week in which he said he would not accept a special exemption to play in the U.S. Open this summer, chided the United States Golf Association for its report on distance saying “you shouldn’t punish athletes for getting better” and said again that last year’s sub-standard play was “a big step in my process to getting back to playing my best”– well it was pretty heady stuff.

Mickelson shed some 30 pounds in the last several months, going on a diet that started with him fasting for six days by drinking nothing but water and a special coffee blend.

It was Mickelson’s misfortune that he ran into a player — Nick Taylor — who put together a strong week on the Monterrey Peninsula to notch just his second career PGA Tour victory, following an opposite-field win five years ago.

For Mickelson, this would have appeared to be a mismatch — but not when you consider his resume since winning his 44th PGA Tour title at Pebble in 2019. He had missed 10 cuts over those 12 months; he didn’t finish better than his tie for 18th at the Masters in any PGA Tour event since that win.

“After I won last year, I knew I was going to go out and just crush the rest of the year; and the rest of the year crushed me,” Mickelson said. “Kind of reversed it. I did not play well. I didn’t play up to my level of expectation, and it just kind of snowballed and got worse.”

Mickelson began 2020 talking big and playing small. He missed the cut at the American Express, a tournament he know hosts, and had to wait around to hand the trophy to winner Andrew Landry on Sunday.

A week later, at his hometown Farmers Insurance Open at Torrey Pines, he again missed the cut — and then went to the driving range, where he spent an hour hitting balls and not looking like he was making much progress.

Ahead was a controversial trip to Saudi Arabia for a big seven-figure appearance fee and a European Tour event where Mickelson began to find some form. He was in contention during the final round, and eventually finished third — his best result by miles going back to Pebble Beach.

But it was a soulless event in the Middle East with maybe a few dozen fans on any hole and fairways as wide as the Red Sea. Sure, Phil got some confidence back, perhaps some momentum. But could he bring it all the way back across 11 time zones to California?

The fact that he did — shooting 68 at Spyglass, 64 at Monterrey Peninsula and 67 at Pebble Beach to put himself in the final group with Taylor — suggested Phil’s clubs were starting to do the talking.

“What’s nice is I knew I was playing well start of the year,” he said. “In the first couple of tournaments, I ended up not really controlling my thoughts and my visualization very well, and these last two weeks I’ve started to see things a lot clearer and execute a lot better without any type of negativity. So I’ve been much more assertive and aggressive and controlling my mind a little bit better.”

Mickelson, who was tied with Taylor early in the round Sunday, let the tournament get away from him when he doubled-bogeyed the eighth hole with — surprisingly — a conservative play. Not only did he lay up off the tee on the picturesque par-4 (and hit it poorly on top of that), but he then tried to get aggressive with the second shot and knocked it over the green.

Taylor stayed steady through that stretch, and it was too much for Mickelson to overcome, despite some wobbly play by Taylor on the back nine. But credit where credit is due: Taylor played well in some breezy, frigid conditions, as Pebble turned brutal Sunday.

And while Mickelson was unable to produce his 45th PGA Tour title — he would have become the eighth-oldest winner in PGA Tour history at age 49 years, seven months — he did make some great headway as it relates to various tournaments. He’s still not in the top 50, but he moved closer.

Perhaps more important, Mickelson has now positioned himself to earn his way into the U.S. Open. He needs to be among the top 60 on either May 20 or June 10 to avoid sectional qualifying.

Could Mickelson win an elusive U.S. Open at age 50 at the Winged Foot venue where he suffered one of his most inglorious defeats? Just a few days ago, getting there seemed a longshot. So, too, would a victory.

But you can’t win if you don’t play, and suddenly Mickelson has turned boastful words into impressive action.

Braves ink Snitker to extension through 2025
Grizzlies, others speak out on Tyre Nichols’ death
Pereira-Adesanya, Masvidal-Burns set at UFC 287
Sources: Kings GM McNair gets contract extended
What to watch as the PGA Tour moves to Torrey Pines