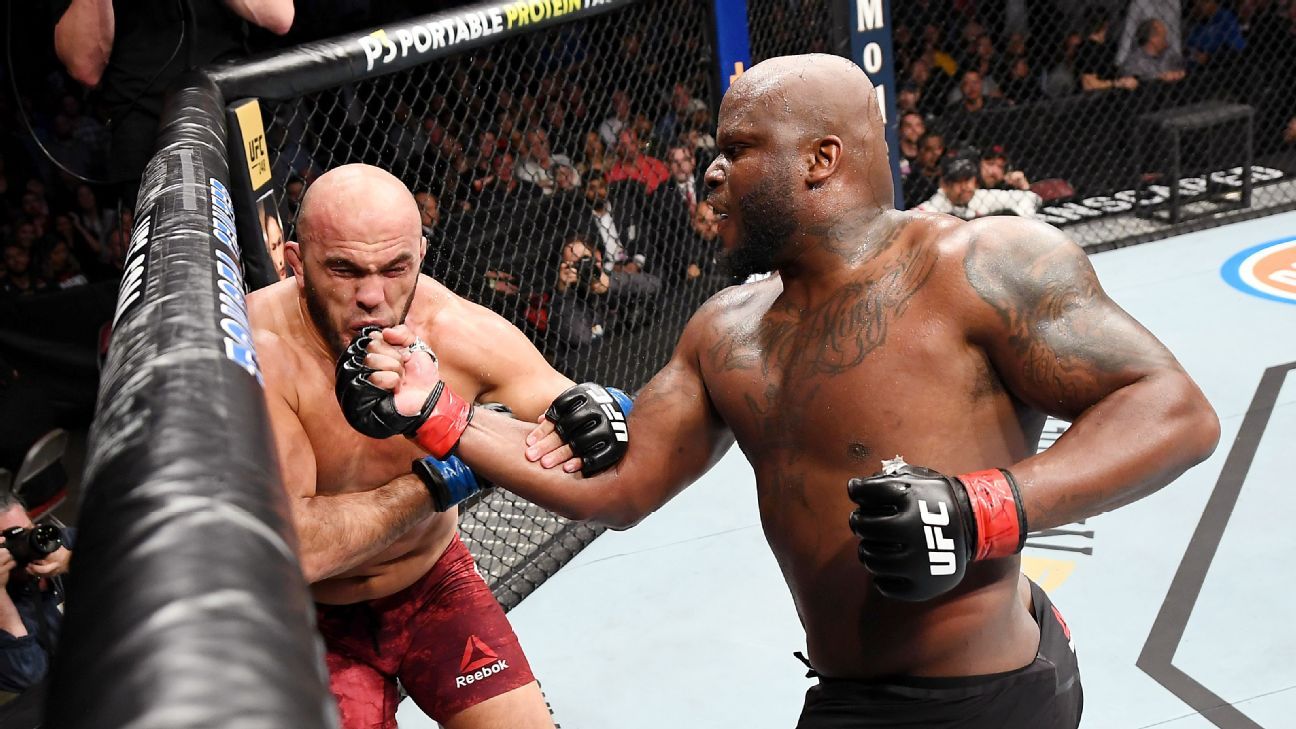 Dominick Reyes took Jon Jones to the limit during the UFC 247 main event. And while Jones made history with his 14th career win in UFC title fights, some experts disagreed with the judges awarding him the unanimous decision victory. What did Reyes think about the result? He shared his disappointment on Monday’s Ariel Helwani MMA Show, but he also said that Jones mentioned in the cage after the fight that a rematch between them would be “epic.”

Valentina Shevchenko was arguably the most impressive performer on Saturday. The flyweight champion dominated No. 1 contender Katlyn Chookagian in her third straight title defense. Shevchenko joined the show and said she enjoys fighting at her natural weight, but a third fight with Nunes isn’t farfetched.

Here’s what else happened on today’s show:

Zombie wants Volkanovski or Holloway next

Chan Sung Jung, better known as the “Korean Zombie,” has been working on his English, and if his trash talking is any indication, his work is paying off.

Zombie has been engaging Alexander Volkanovski on social media because he wants to challenge the featherweight champion. Volkanovski won the title from Max Holloway with a unanimous decision at UFC 245, and there’s been talk of a rematch.

“Nobody wants to see that fight again,” Zombie said. “Volkanovski fights are so boring.”

Zombie said if his next opponent isn’t Volkanovski, he’ll take Holloway. He was asked about Brian Ortega, who had to pull out of a bout in South Korea on Dec. 21 because of an injury. Frankie Edgar took his place, and Zombie recorded his second straight first-round stoppage.

Zombie said through an interpreter that Ortega has ducked him once already and “he doesn’t need to fight a fighter who’s ducking him already.”

Zombie is currently training in the United States and soliciting opinions on an eye condition. He said his next checkup is Wednesday, but he’s been told he doesn’t need a “big surgery,” and that whenever Volkanovki is ready to fight, Zombie is ready. “Volkanovski, I love you. I want to fight you,” Zombie said.

Derrick Lewis overcame the wrestling-heavy offense of Ilir Latifi at UFC 247 to earn a unanimous decision victory. Perhaps that will prepare Lewis for what might be in his future.

Lewis said on The Helwani Show he’s aware that the surging Curtis Blaydes is interested in a fight. Blaydes, who relies heavily on his wrestling, has put himself into heavyweight title contention by winning three straight fights and seven of his past eight.

“The Black Beast,” a winner of two in a row and former title contender, said he’s game to fight Blaydes.

“Yeah, of course Curtis Blaydes wants to fight me, because he’s a wrestler and he felt like he can do more damage to me if he can take me down,” Lewis said. “That’s great, that can be the next fight. Instead of him trying to push for the title, he wants to risk all of that and try to fight me and get knocked out of the way, that’s fine.”

Lewis should be confident heading into his next matchup, especially being healthier with his diet, he said. His weight issues are under control and he said he felt lighter in his fight this past Saturday. He showed that with some new weapons. Instead of brawling, Lewis wowed the Houston crowd by taking to the air to do damage.

“Yeah, I got flying knees, I got a lot of the flying stuff I wanted to show y’all,” Lewis said. “So stay tuned.”

After Antonio Arroyo had issues with cramping after weigh-ins on Friday morning, he was pulled by UFC doctors and was unable to compete again Trevin Giles at UFC 247.

In town preparing to be in the corner of Youssef Zalal, James Krause offered up his services, negotiated a new contract and agreed to fight Giles on incredibly short notice. Arroyo was on The Ariel Helwani MMA show on Monday and walked Helwani through a hectic 24 hours.

“Around 2 p.m., I’m at lunch. I’d just got done eating a huge rice bowl. I had a Coke. Jason House, my manager, he gets a text that says Arroyo was just taken to the hospital, or something like that. In passing, I was just like, ‘I’ll fight Giles. I’ll fight that dude.’ I didn’t think anything of it. Obviously I didn’t think it would come to fruition.

“I said if we get a deal, I’ll fight him, I don’t care. We didn’t even know [for sure] that Arroyo was out at this point. They started working through everything, and then we figured out about 30 minutes later that he is out, and then it goes to a deal where [the UFC] is like, ‘Do you want the fight?’ And then obviously the negotiation talks.

“They’re like, ‘You need to go to weigh-ins and weigh in,’ and I told them, ‘I’m not going to weigh-ins until you guys figure this out. You’re not going to go up there, get me on the stage, and then let’s say you guys don’t want to pay me any more, the deal isn’t worked out, and then I’m going to look like a punk for not wanting to fight him. You’re not doing that to me. If you guys don’t figure this out by 3:30, (which was the time that that everybody was leaving) I’m good with it.

“I gave them ’til 3:30 and then nothing came, so I was just like cool, it’s probably not going to happen. And then 3:45 rolls around and they’re like, ‘You have the fight.’ I’m like, ‘No no no no, there’s other things that need to be talked about. We need to talk about money.’ I’m not fighting on 18 hours’ notice, above my weight class, on the current contract that I’m on.

“We worked out the deal, I got on a shuttle and made it there before weigh-ins, a few minutes before. I jumped on a scale, went to the ceremonial weigh-ins, which everyone sees.

“I was 186.2, and so I just stopped eating and drinking, and I ended up weighing 183.5, I think, which was crazy to me that I floated that much in a matter of two hours, or whatever it was.

“I did the physical at 9 p.m., or something like that. All I needed was a regular physical, that the doctor can look at you and be like, ‘Yeah, you’re fine.’ It was basically a formality at that point. I knew I had the fight. I knew the fight was on.”

Jones’ coach confident in his future despite scare against Reyes

Standing in Jon Jones’ corner at UFC 247, Mike Winklejohn was concerned from the moment Jones and Dominick Reyes were inside the cage.

“Dominick looked real hungry, he was pacing back and forth we figured he would come out firing, and he did,” Winklejohn said to Ariel Helwani. “Holy crap. My hat is off to that young man.”

Reyes did indeed come out firing, taking full advantage of a somewhat surprised Jones and, despite it not being scored official, knocking Jones down for the first time in his career with a punch to his chest.

“That scared the s— out of me, to tell you the truth,” said Winklejohn. “Dominick’s back was to me, so when he hit Jon, I didn’t know if that hit his chin or not. So for a flash of a second, I was thinking uh oh … we gotta figure this out. But it was his chest and he bounced right back up and had to deal with a lot of pressure from Dominick.”

Winklejohn was impressed with Reyes, but scored the fight in Jones’ favor giving him rounds 2, 4 and five. He asked Jones to keep pushing on and was proud of his fighter’s effort.

Now it’s back to watching tape,which Winklejohn said would resume Monday, and training for Jones with an unknown future destination. He could continue on the path at light heavyweight, or consider a move to heavyweight where more tough challengers exist.

“At heavyweight they’re a little bit slower,” said Winklejohn. “Yes they hit harder, but Jon has a really good chin. It’s a speed versus power game. and I think Jon does just fine at heavyweight as well as continue to dominate at light heavyweight.”

A rematch against Reyes is also an option and something that would motivate Jones and his team.

“I can’t even say Jon had an off night. Dominick just had a great night,” he said. “Everybody is always looking at the guy at the top to fall. The young guys are coming along … everyone in the sport is getting that much better, that much faster. It’s exciting to see what the future has to hold.”

Jan Blachowicz ready to even the score with Corey Anderson

Jan Blachowicz says his conditioning will be improved heading into his rematch with Corey Anderson at UFC Fight Night.

Jan Blachowicz has been in Rio Rancho, New Mexico, for over two weeks gearing up for his fight on Saturday with Corey Anderson. Blachowicz said on Ariel Helwani’s MMA Show that while he hasn’t sampled the local cuisine, he’s discovered an appreciation for its barber shops.

They’re cheaper than back in his home country of Poland. And they apparently do pretty nifty work.

“I send picture to my fiancée,” Blachowicz said. “She said, ‘Whoa, good job.”

Blachowicz said he’s going back to the barber on Thursday to get his hair cleaned up. Probably a wise idea as all eyes in the MMA world will be focused on his fight this weekend, which could determine the next UFC lightweight title challenger.

Blachowicz has won six of his past seven fights, including defeating Luke Rockhold and Jacare Souza in his past two outings. Anderson, meanwhile, has won four in a row.

Saturday’s fight also is a chance for Blachowicz to get some revenge. He lost a unanimous decision to Anderson five years ago. It’s a fight that Blachowicz said he wasn’t in great shape for due to overtraining in camp and jetlag.

But those factors won’t be an issue this weekend, he said. He’s fully prepared for the 6,600-foot Rio Rancho elevation. He even called his cardio “amazing.”

“This one is in my head all the time,” Blachowicz said of his first fight versus Anderson. “I know that when we fight together five years ago, it was one of my worst shape ever. After two minutes of the fight, I was completely exhausted. Now I want to prove to Corey he had a lot of luck in our first fight.”

“He’s the same fighter, we are just better,” Blachowicz said. “We start to be on his level. … This is the reason why every next fight will be worse for him.”