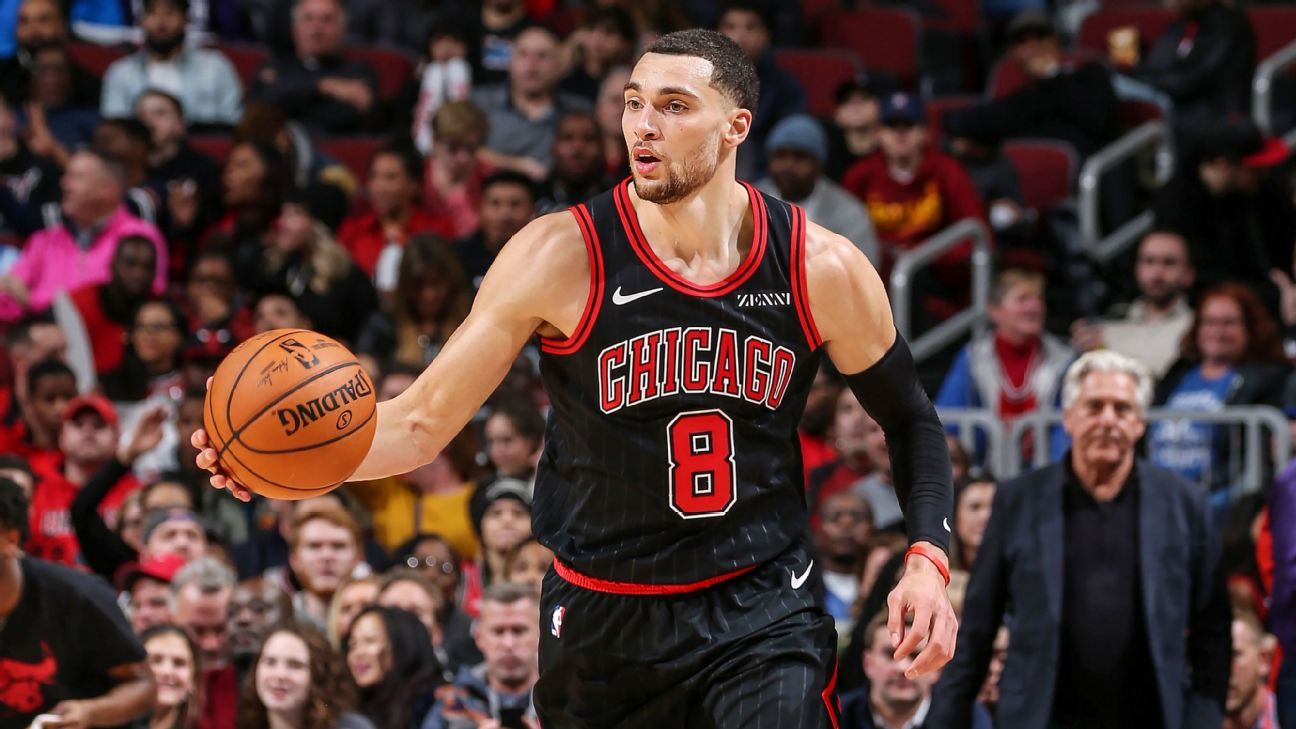 CHICAGO — ZACH LaVINE had a vision.

The All-Star Game was set to return to Chicago and LaVine would be there, representing the hometown Chicago Bulls. He said that was the goal before the season tipped off. LaVine played some of the best basketball of his career in the first half of the season, but the sixth-year guard wasn’t voted in as a starter, nor was he selected as a reserve by the coaches.

In most years, his 25 points per game would have been enough to earn him a spot, but his scoring hasn’t translated to winning. The Bulls are just 19-35, likely headed toward their third consecutive trip to the lottery. In three seasons in Chicago and three before that in Minnesota, LaVine has never reached the postseason.

“I’ve never won anything,” LaVine told ESPN earlier this season. “Sometimes you get drafted to a really good team where you’re already in the playoffs and you’re a winning player, but I haven’t experienced anything like that. I’m still trying to learn this like everybody else because it hasn’t come easy for us.”

Some of that, at least this season, can be attributed to injuries. The Bulls have lost Wendell Carter Jr., Lauri Markkanen and Otto Porter Jr. for significant time this season. Even while watching on the sideline, Carter “can see [LaVine] becoming that franchise player” and says he knows what needs to happen to make that the Bulls’ reality.

“We’ve just got to start winning games,” Carter said. “He does a lot for this team.”

LaVine, 24, is the de facto leader of a Bulls team that ranks as the third youngest in the NBA. There are only two players on the roster who have more NBA experience than he does, and only Cristiano Felicio has been with Chicago longer. In the second season of the four-year, $78 million deal he signed in the summer of 2018, he is still pushing to thrive as Chicago’s franchise player, and helping the Bulls thrive along with him.

Dwyane Wade expressed support for the Bulls shooting guard earlier this season, tweeting, “I can’t say it enough Zach LaVine is a problem. I can’t wait to watch him over the next few years blossom.”

The question remains, though: Will Zach LaVine’s Bulls ever be a problem for the rest of the NBA?

WHEN THE BULLS have been at their best, they’ve been led by a transcendent superstar. First it was Michael Jordan, who led the team to six championships in the 1990s.

A generation later, it was Derrick Rose, who got them back to the conference finals in 2011.

No one is asking LaVine to rise to the stature of those two MVPs. But the Bulls hope LaVine can grow into the kind of star who can lead them back to the playoffs. After Thursday’s trade deadline, Bulls executive vice president of basketball operations John Paxson reinforced the front office’s long-term belief in LaVine.

“Zach has had an excellent year,” Paxson said. “From the time we’ve had him, we’ve all seen growth in him and confidence in him. And we put a lot on his shoulders. Zach is a very, very talented player.”

The Bulls knew LaVine was talented when they traded for him. He was the top young asset coming back to Chicago in the 2017 draft-night deal that sent Jimmy Butler — the last Bull to make an All-Star team — to Minnesota, even though he was coming off a torn ACL.

The injury delayed his debut with the Bulls, and once he got on the court, he showed signs of rust, averaging just 16.7 PPG while shooting a career-low 38.3%. He increased his scoring average to 23.7 PPG last season and shot a career-best 46.7%. This season he’s taking and making more 3-pointers than ever and is on pace to set a Bulls record for 3s made in a single season.

“When we got him, he was still hurt, he was recovering from an ACL [tear], and he has done a heck of a job fighting through that moment, which I don’t think is talked about enough,” Bulls coach Jim Boylen said. “For him to be at the level he’s at, after that injury, is a credit to his character and his toughness.”

Still, his improvement hasn’t been without bumps in the road. That became evident earlier this season during a home loss to the Miami Heat. After falling behind 13-0 in the opening quarter, Boylen singled out the Bulls’ best player by benching him for what he described at the time as “three egregious defensive mistakes.” Behind closed doors, Boylen was pushing LaVine to stay engaged in games at all times.

“I don’t not trust you. I need more,” Boylen told LaVine during an hourlong discussion the next day in Boylen’s hotel suite in Charlotte, North Carolina. “I want to see less of the same mistakes and become the guy you can become.”

Both Boylen and LaVine were raw in their delivery, airing out their frustrations over losing. The Bulls coach challenged him to become more consistent, play with more physical toughness on both sides of the ball and make smarter decisions.

“My goal for Zach at that time was to become a more efficient player — a two-way player. I asked him to shoot less contested 2s, get to the free throw line and shoot more of his 3s,” Boylen told ESPN. “And be a two-way player and a winning, productive player, an elite scorer and All-Star.”

LaVine responded with a career-best 49-point performance — including the winning 3-pointer with 0.8 ticks remaining — to lead the Bulls past the Hornets on the road, 116-115. His 13 3-pointers that night tied Golden State Warriors guard Stephen Curry for second most in NBA history.

“It’s respect on both ends, and we’re in a better place now,” LaVine said.

CHICAGO HAS FAITH in its young core beyond LaVine, hoping Markkanen, Carter, Coby White and Chandler Hutchison can be the key pieces around its leading scorer.

But LaVine is still the leader, a role he has been growing into this season. It’s something the Bulls have wanted to see from him, both on and off the court.

“He’s been talking in the huddles, he’s been chattering, he’s been locked in,” Boylen said. “What he’s doing better is he’s bouncing back from maybe a poor moment or a bad stretch. He’s bouncing back now. He’s not playing backward at all, and that’s what the great ones do. They don’t even worry about that play.”

Mentally, that’s where LaVine has made the most progress. He’s also learning that being a leader is more than just scoring the most points each night, something Marcus Smart has seen firsthand with his role on the Boston Celtics.

“You’ve got to be the one to get the job done most of the nights, but you’ve also gotta know when to lean on your teammates more and not try to do it all yourself,” Smart said. “He’s been doing a really good job with it.”

Portland Trail Blazers guard Damian Lillard, a five-time All-Star, backed up that assessment. What impressed Lillard in particular was the way LaVine responded to his benching.

“For a player that’s as talented and as good as he is, I don’t think it’s hard once you see the ball go in a few times to get hot,” Lillard said. “I think that’s what separated him is being able to have that type of mentality where he could’ve easily came out and pouted and not shown up for his teammates, but he responded in a kind of way that a player of his level should.”

That mentality has earned LaVine comparisons from an opposing coach to at least one young All-Star.

“He’s a little bit like Donovan [Mitchell] where the more experience you get, the more exposure you get to different situations, the more comfortable you find yourself and the game starts to slow down,” said Utah Jazz coach Quin Snyder, a fellow Washington native. “It’s clear to me that he’s seeing the whole game, the big picture on the court, making plays for other people, and he’s a handful. There are times with some of those guys where you just tip your hat because you can’t do anymore and he’s going to make a play and that’s all you can do, but I’ve seen him get better every year.”

While LaVine’s skills on the offensive end continue to earn him praise, it’s the other end of the court that has been his trouble spot, and where his improvements have been more subtle.

Two years ago, LaVine ranked 490th in the NBA in defensive real plus-minus. Last season he was No. 472. This year he’s 400 — still far from being a plus contributor on that end of the court, but far closer to league average than he has ever been. That improvement has not gone unnoticed by his opponents.

Patience is something Paxson has also said the Bulls need as they move forward. LaVine is under contract for two more seasons after this one. The front office still believes in him. But it also wants to see more.

“We know what we have to get … in this business, you win with stars. Every team does,” Paxson said. “We went into a rebuild. You draft and you hope that those guys develop. We’re still trying to get to that phase of being a relevant, legitimate team. … The time after the All-Star break will be us evaluating who fits going forward, but we’ve not given up on our young guys. A lot of people make mistakes in this league. I know the balance is not hanging on too long, but it’s not giving up on guys too early.”