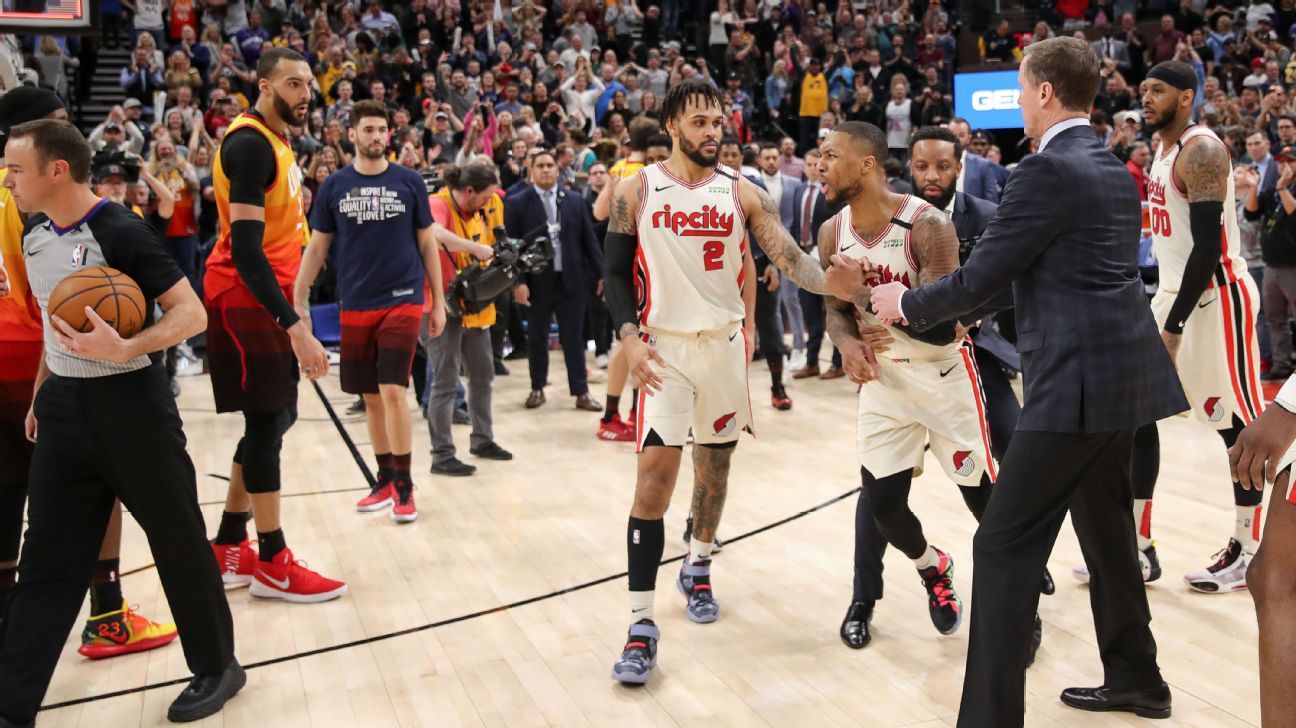 The entire viewing audience that tuned into Friday night’s matchup between the Portland Trail Blazers and Utah Jazz was looking for a show. What the people got was a controversial finish in a game the Jazz would win 117-114.

The odds were already stacked against the Trail Blazers when Friday started. Portland beat the San Antonio Spurs 125-117 at home Thursday night, led by All-Star point guard Damian Lillard, who had 26 points and 10 assists. But Utah had the night off, putting the Trail Blazers at a rest disadvantage.

The Trail Blazers had only nine available players for Friday night, with center Hassan Whiteside (left leg contusion) and power forward Nassir Little (left ankle sprain) unable to suit up. The number of available players dwindled to seven, after backup point guard Anfernee Simons left the game in the first quarter because of a concussion, and starting small forward Trevor Ariza was ejected for the first time in two years in the second quarter after disputing a non-call.

Despite Portland’s lack of depth, Lillard had 27 points in the first half, and the Trail Blazers led the Jazz 74-58 with 11:07 left in the third quarter.

The Jazz ultimately led by as many as seven points in the fourth quarter as the Trail Blazers appeared to be wearing down. But Lillard sparked the Trail Blazers on a 12-5 run inside the last three minutes of the game, tying the score at 114 after a tough floater with 42.6 seconds left. “Dame Time” appeared to be underway once again for the reigning NBA Western Conference Player of the Week.

Utah Jazz All-Star shooting guard Donovan Mitchell answered Lillard’s tying field goal with a bucket of his own with 19.5 seconds left, forcing a Portland timeout. Out of the timeout, Lillard went to work and appeared to have a layup that hit the right side of the backboard before Utah All-Star center Rudy Gobert blocked it away.

Except, Gobert wasn’t called for goaltending. Utah small forward Bojan Bogdanovic (team-high 27 points) split a pair of free throws to give the Jazz a 117-114 lead, which was the final score after Portland fill-in center Caleb Swanigan missed a corner 3 at the buzzer that would have forced overtime.

Lillard finished with a game-high 42 points on 16-of-30 shooting, including 8-of-14 on 3s and 2-of-3 of free throws. As expected, Lillard was upset about the missed call. He would not be the only one, as players such as fellow Team LeBron All-Star Luka Doncic of the Dallas Mavericks as well as former Trail Blazer Dorell Wright were wondering how the officials could prevent another classic Lillard finish:

how you miss that call?🤷🏼‍♂️

In between explaining his issues with officiating over the game as a whole, Lillard had one refrain: We’re in a playoff race and this cost us a game.

Terry Stotts says his players are “pissed off” about the controversial non-call on Damian Lillard’s potential tying layup that was blocked by Rudy Gobert.

Portland’s loss dropped its record to 24-29, one spot outside the top eight in the Western Conference, and 2½ games behind the Memphis Grizzlies.

In a pool report, crew chief Josh Tiven said that Lillard’s shot was “not reviewable since no goaltending call was made on the floor.” Tiven also added that “we’ve since looked at it via postgame video review, and unfortunately saw that we missed the play, and a goaltending violation should have been called.” Even Gobert admitted it was goaltending.

Not that Lillard wants to hear that now. After the game, while Gobert expressed respect for Lillard, it appeared that tensions were not reserved for just the officiating. Mitchell suggested that the Jazz shouldn’t be “punked” by some of Portland’s players, specifically naming second-year shooting guard Gary Trent Jr. Lillard took umbrage with that assessment.

I have nothing but respect for @Dame_Lillard and he knows it. Love to compete against him. Everyone go report this account for posting lies. https://t.co/vEbGAaZO6k

Earlier Friday, the NBA announced that Orlando Magic head coach Steve Clifford would be fined $25K for verbally abusing game officials following Orlando’s loss on Thursday to the New York Knicks, though the NBA also admitted that its officials missed two calls late in that game that would have been to the Magic’s advantage.

This also isn’t the first time that Lillard has been irate with officials after a game this winter, nor is it the first time that Gobert wasn’t involved in a controversial blocked shot. Lillard was upset last month at the end of a 133-125 loss to the Mavericks, drawing a technical foul. And earlier in January, the New Orleans Pelicans were victimized by a Gobert block on All-Star forward Brandon Ingram that the NBA admitted the next day should have been a foul at the buzzer in what was ultimately a 128-126 Jazz win.

None of this will placate Lillard or the Trail Blazers, who will try to get back on the winning end of things Sunday night against the Miami Heat.

On the other side, the Jazz will take a win that snaps what was a season-worst five-game losing streak.

The Jazz will visit Portland on April 2 for the final meeting of the season, one that might have playoff implications for both teams.

Which New York staff is No. 1? Way-too-early 2023 MLB starting rotation rankings
How bright is your team’s future? Ranking the top MLB prospects for all 15 NL teams
Paul puts U.S. up 2-0 in Davis Cup qualifying
Caddie collapses, given CPR at Pebble Beach
Why Scotland’s stunning win over new-look England will live long in the memory