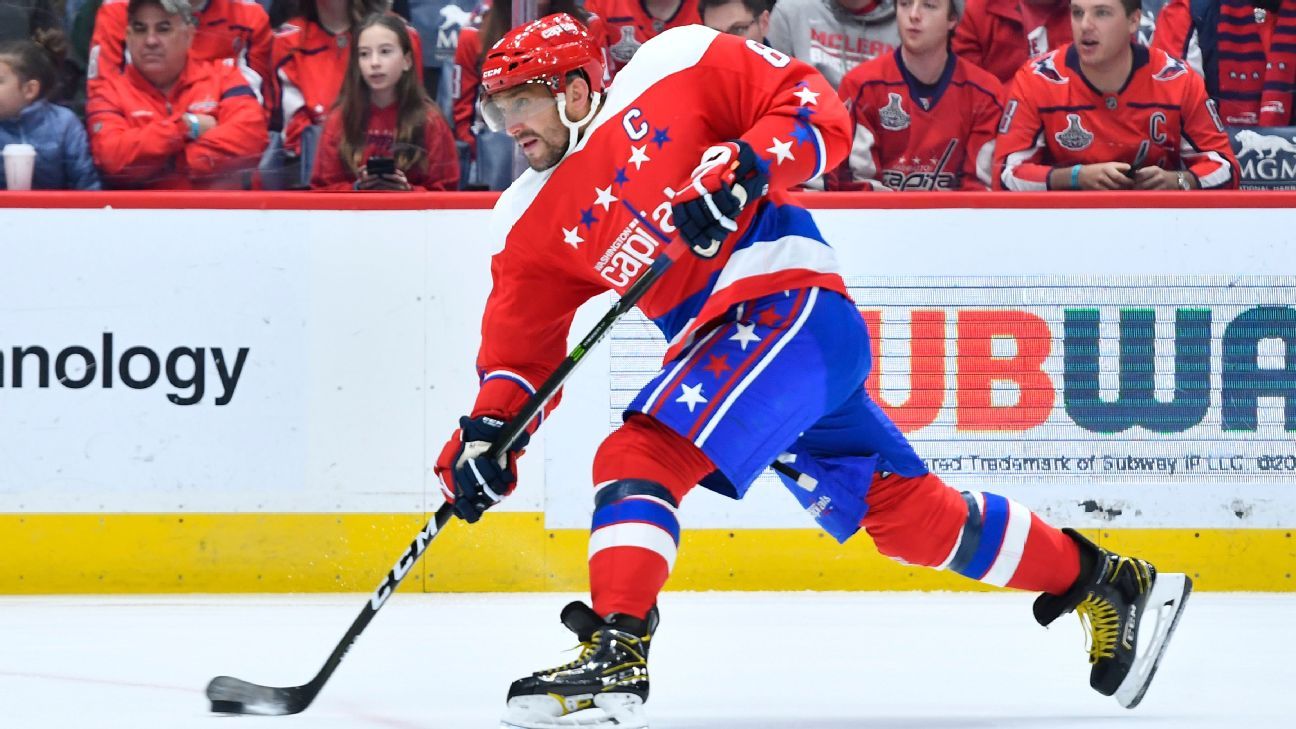 Editor’s note: This is a repurposed roundtable from October 2018 with updated answers from our team as Ovechkin closes in on 700 goals.

We’re officially locked in on 700 watch for Alex Ovechkin, the longtime goal-scoring legend for the Washington Capitals. Currently sitting at 698 goals for his career, and 40 on this 2019-20 season, Ovi is No. 8 on the all-time list.

Ovechkin’s scoring started immediately, as he scored twice in his debut on Oct. 5, 2005. Along the way, he has notched 26 hat tricks and 10 seasons of at least 40 goals. And now the Russian winger is riding a hot streak of 14 goals in his past seven games.

At just 34 years old and looking to join the likes of Wayne Gretzky, Gordie Howe, Jaromir Jagr, Brett Hull, Marcel Dionne, Phil Esposito and Mike Gartner in the elite 700 club, we were left wondering if The Great 8 is already the greatest scorer the NHL has ever seen. So we dove into the numbers and asked our NHL experts whom they consider to be the top lamp-lighter of all time.

Who is the NHL’s greatest goal scorer in history?

Greg Wyshynski, senior NHL writer: Yes, the best goal scorer in NHL history is Ovechkin. This is something observable, as teams have had over a decade to defend his shot, only to find it virtually undefendable. This is something quantifiable, as Ovechkin has 698 career goals at 34 years of age. Barring injury, this is another 50-goal season for Ovi. It’s potentially a 60-goal season, which has never been accomplished by a player his age — for all the greatness of Gretzky, his last 60-goal season was at 26 years old. If Ovechkin reaches 60 goals, he’ll have passed both Gartner (708) and Esposito (717) for sixth all time in goals scored. 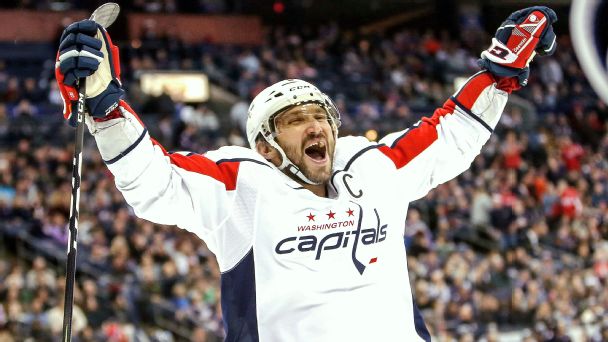 That’s the quantifiable argument, and here’s the contextual one: Simply put, Ovechkin is doing this in an era with the best athletes in NHL history and against goaltenders who, while not exactly a collection of Dominik Haseks and Martin Brodeurs, have much better technique and refined coaching than the cardboard standups Gretzky used to put pucks behind. (Not to diminish Gretzky’s ability, mind you, but comparing the training modern goalies have with those in the 1980s is like comparing a laser surgeon with a house call doc treating you with a bag of leeches.)

Provided he remains healthy — and the Russian Machine rarely breaks — we’re witnessing the best chance to see someone shatter Gretzky’s record, after Mario Lemieux lost his to his body and Jagr lost his to lockouts and the lure of KHL riches. It’s undeniable now that Ovechkin has a shot at breaking Gretzky’s goals record of 894. He’ll need roughly an average of 30 goals per season for six more seasons. Whatever his end total, in Ovechkin we’re witnessing the reign of the NHL’s most dominant goal scorer ever.

Chris Peters, hockey prospects analyst: I hear you, Greg, but I’m going with Mike Bossy — with Ovechkin a very close second. I think Ovechkin is probably one of the game’s best pure shooters, and I was 3 years old when Bossy retired. But looking at the numbers, what Bossy did is mind-blowing. The fact that he ended up playing only 10 seasons, as a bad back cut his career short, is all that keeps him from being the no-brainer in this discussion.

Bossy topped 50 goals in every season but his last, and he topped 60 five times. He’s the NHL’s all-time leader in goals per game (minimum 300 games played) and had a career shooting percentage of an absurd 21.2%, fourth highest in NHL history. Yes, goalies were stopping pucks at a far lower rate in Bossy’s prime, but he was special even by that era’s standards. One wonders what would have happened had he stayed healthy for longer.

You can make arguments that Bossy’s lack of longevity either disproportionately helps his case or hurts it, with his unrivaled per-game rates taking the place of still-great but maybe not eye-popping raw numbers. That’s one thing that I think gets undersold about Ovechkin — just how durable he has been, which probably should be part of the discussion in what has made him so special. The fact that Ovi remains a 50-goal scorer into his mid-30s further complicates the comparisons since Bossy didn’t make it past his age-30 season.

Greg’s point on the current era of goaltending is well taken too. I think that plays a huge role in the overall discussion and definitely puts Ovechkin among the absolute elites of this sport. I just think if Bossy were able to continue playing, there would have been a really good chance Gretzky would have been chasing Bossy, not Howe, when The Great One was going for the all-time goal-scoring record.

Emily Kaplan, national NHL writer: Do I have this right? We’re discussing the greatest NHL goal scorers ever, and nobody picked the guy who is No. 1 on the all-time list? The player we literally call The Great One? This is easy, guys. Should Ovechkin pass Gretzky, I’ll re-open discussion. For now, though, Gretzky is the answer. He has 894 career goals, 93 more than anybody else. And Howe, who is second on the list, played 290 more games than Gretzky.

Sure, Gretzky played in a different era than Ovi, where goals were easier to come by, but he could play only to the constraints of the time. You can’t hold it against him. And if we’re going to bring up the improvement of goalies, we should also mention that sticks today have far more advanced technology than in the 1980s and 1990s. Bossy and Pavel Bure both have better goals per game rates, but Gretzky’s career was nearly twice as long as both of those guys.

And if we’re talking greater impact, Gretzky transformed the complexion of every franchise he played for. His name is synonymous with hockey — whether you are a hockey fan, or not, you just know.

Ben Arledge, NHL editor: Yes, it’s Ovechkin. The man is not yet 35 years old and will soon be one of eight players to have 700 goals for his career. The numbers speak for themselves there. But I think it’s actually pretty close, and the guy for me who gives him a run for the money isn’t Gretzky or Bossy or Lemieux. It’s a guy who sits tied for No. 69 on the all-time goals list.

If you look strictly at goals per game, Bure is fifth all time in the NHL at 0.623, just ahead of Ovechkin (0.614). Watching highlights of Bure’s dominant 12-season run in the NHL, he was playing at a level all by himself. Nicknamed the Russian Rocket, he had Connor McDavid‘s speed, Ovechkin’s shot and Patrick Kane‘s handles. Thrice leading the NHL in scoring, Bure had two 60-goal campaigns and three additional 50-plus seasons. Even in the Dead Puck era, he compiled 437 goals but was held to barely 700 career games — over 400 fewer than Ovechkin has played — while battling knee injuries for most of his career.

If he had been able to stay healthy, who knows where he’d be on the all-time goals list. And really, if you think I’m silly even mentioning him, go watch some highlights and remind yourself of Bure’s insane ability to light the lamp in the 1990s. Because it truly was something special.

All that said, Bure is of course edged out in my book by Ovi. He actually does a lot of the same things that made Bure so unstoppable, but he has been doing it longer and against the most technically sound goaltending hockey has ever seen. There is no defending him from the left circle, and there is no defending him as he drives to the net. His strength, on top of the ridiculous speed, soft hands and an absolute hammer of a shot, is what separates him. Bure went around you. Ovechkin will go around you or through you, whatever it takes to get into a position to score. And once he’s there, there’s no one who finishes better than him.

Like Bure, he didn’t do it in the ’80s, when teams were scoring nearly four goals per game. There’s a reason Ovechkin still potted 51 in his age-33 season, and it’s no shocker that he has 40 in 53 games this season. Plain and simple, you are watching the greatest ever at finding the back of the net.