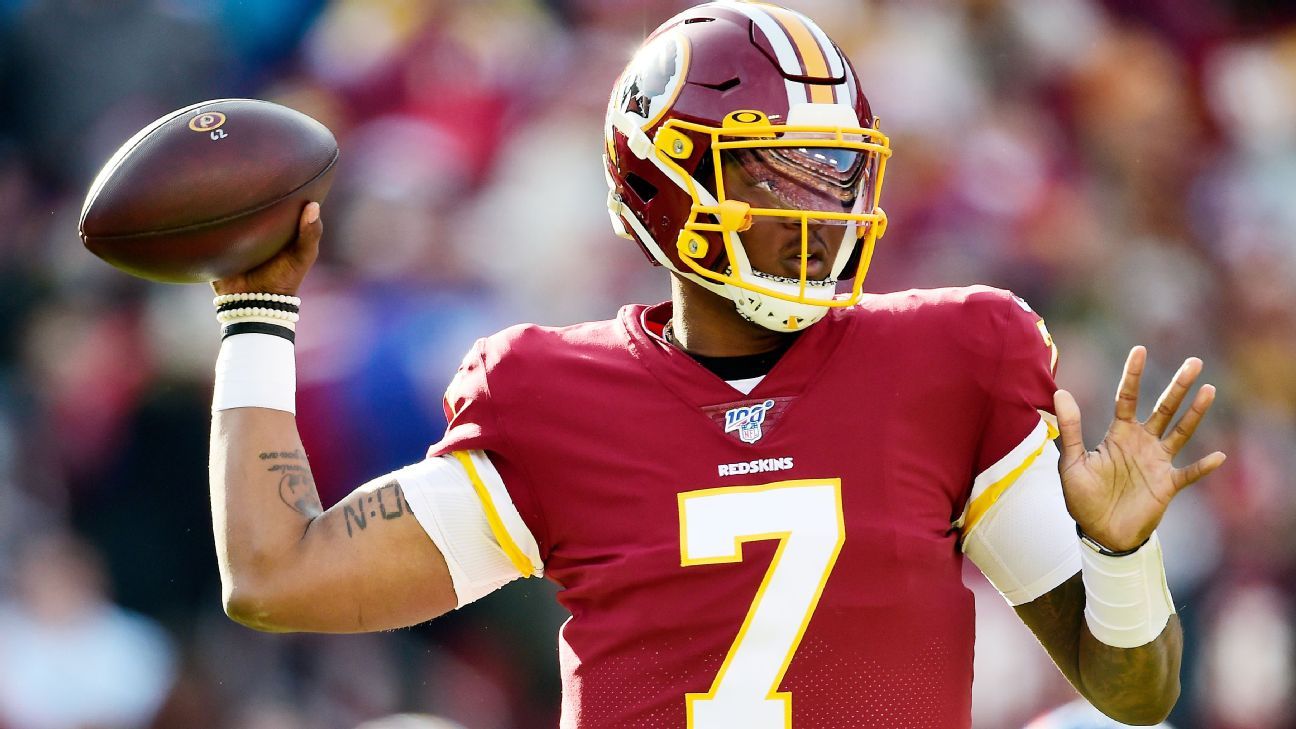 The Washington Redskins liked where Dwayne Haskins finished the season; they also know there’s a lot of work ahead for their young quarterback, which is why new coach Ron Rivera said at his first news conference he’ll take his time before he names a starter.

“Dwayne has a long way to go,” Doug Williams, the Redskins’ senior vice president of player development, told reporters at a community event Friday. “But like I told him, he was doing what we expected him to do. He was ascending. Hopefully the way he goes now, he keeps going up. All eyes are going to be on him. At the same time you’ve got a new coaching staff and they’re not married to him. … He’s got the ability to do what any coach wants him to do.”

And, Williams said, having a new staff should help. The Redskins also hired a new offensive coordinator in Scott Turner and quarterbacks coach in Ken Zampese.

“Dwayne didn’t have the opportunity last year where the coaches put their arms around him,” said Williams, who had been the senior vice president of player personnel the past two years. “He’s got to know we want you to be good. With the new staff coming in, and what he did towards the end of the year, he’s going to give this new staff an opportunity to say, ‘Hey, we need to work with this kid to get the best out of him.'”

Haskins’ first season was anything but smooth as it became evident around the draft that there was a divide in the building about taking him with the 15th overall pick. As one source said, it was clear that owner Dan Snyder wanted to draft him. There were questions about how much extra work he was putting in as numerous sources said he struggled to retain the plays.

But Haskins also was playing for a staff that was in a must-win situation, making it difficult for the coaches to adequately groom a young quarterback. He struggled mightily in his first two relief outings, going a combined 12-for-22 for 140 yards and four interceptions vs. the New York Giants and Minnesota.

But Haskins showed progress once he became a starter and, sources say, invested more time in work outside of the facility. Then-offensive coordinator Kevin O’Connell also took on a bigger role with Haskins down the stretch. In his last two games, Haskins completed a combined 31 of 43 passes for 394 yards and four touchdowns in games vs. the Giants and Philadelphia Eagles. He also directed two late field goal drives in a comeback win over Detroit, a game Rivera has referenced several times.

At season’s end, numerous people in the organization said they loved how Haskins finished, but still wanted to see how he progressed.

A big part of Rivera’s interview with Snyder involved his plan for developing Haskins. Rivera has said he wants to go through the spring before settling on any quarterback decision. He said he wants Haskins to become more of a leader. Haskins told reporters at the event that he has reached out to some of Rivera’s former players in Carolina. And he’s fine with having to prove himself to a new staff.

“That’s cool,” Haskins told reporters. “I’m going to have to work hard and eventually take it over. Just do your best to be accountable for what you have to do and be ready to go.

“[Rivera’s] a guy who’s going to hold you accountable and make sure you put the work in. I’m all for that. I’m excited.”

Williams has become a mentor of sorts for Haskins as the two spoke often during the season. In Williams’ new role he’ll serve as a liaison between the players and the coaches, which means his tutoring of Haskins will continue. He has talked with Haskins in the past about what NFL quarterbacks must do and how they’re always watched.

“The new staff knows that Dwayne Haskins is the starting quarterback here,” Williams said. “The only thing that can happen is for Dwayne to give it back to them. It’s up to him to learn the playbook, wear the coaches out. He’s got to stay at the facility until they run him out of the building.”

Late in the season, teammates noticed a difference in Haskins in the work he did and the way he carried himself. Williams said there’s one way to keep winning them over.

“Keep doing it over and over,” Williams said. “Dwayne has to let them know ‘I’m here, I’m the leader, this is my team. I’m going to be the starter and I’ll show you why I should be starting.'”