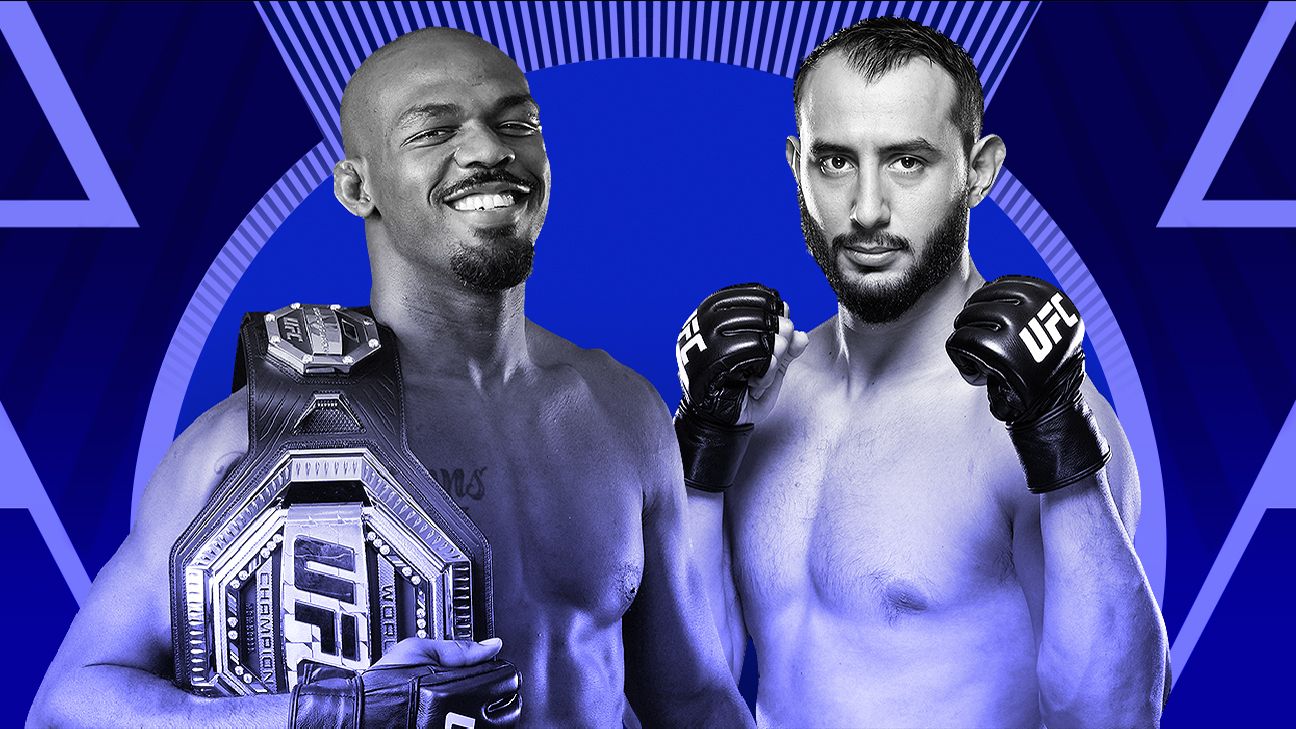 In 2019, Jon Jones accomplished something he never had before: He flew under the radar.

Even in a year in which the UFC’s biggest star, Conor McGregor, failed to make a single appearance, 2019 was by all measures one of the quietest years of Jones’ career. He defended his light heavyweight championship twice, against Anthony Smith and Thiago Santos, and he went home.

UFC 247 features two of MMA’s most dominant champions at the top of the card. In the main event, Jon Jones will defend his light heavyweight title against 12-0 Dominick Reyes. Before that fight, flyweight champion Valentina Shevchenko will take on No. 1 contender Katlyn Chookagian.

He stayed mostly out of trouble. No drug testing controversies to speak of. Even from a competitive standpoint, Jones didn’t talk a lot of trash. He did what he said he was going to in 2019. He kept his head down and continued to extend the gap between himself and the rest of the 205-pound division.

Jones, 32, will look to stay that course on Saturday when he meets Dominick Reyes in the main event of UFC 247 in Houston (10 p.m. ET, order here on pay-per-view).

There’s a second championship fight in the co-main event, with Valentina Shevchenko defending her flyweight belt against Katlyn Chookagian. If successful, it would be the third defense for Shevchenko. She is a long way behind Jones in terms of accolades, but no one doubts she has a chance to ultimately hold her title just as long as he has.

Still, this night will be about Jones. Should he win, he would move ahead of Georges St-Pierre for most title wins in UFC history — it would be his 14th — and would tie Demetrious Johnson‘s record of most title defenses (12).

It’s an interesting tug of war for Jones. In recent years, he has clearly taken measures to step out of the public eye. But as he enters 2020, his career is at a point that he should absolutely be one of the biggest stories of the year.

With McGregor wanting to stay active, and other stars like Jorge Masvidal, Nate Diaz, Khabib Nurmagomedov and Israel Adesanya all on the rise, it will be interesting to see if Jones — and his all-time greatness — will capture the imagination and attention of the MMA world in 2020 as much as it used to.

A dominant performance on Saturday, reminiscent of the Jones who stormed through the division before other issues veered him off course, might do the trick.

17: Consecutive UFC fights in which Jones is unbeaten, a record for the promotion. Since March 2010, he is 16-0 with one no contest.

95: Percent of opponents’ takedown attempts successfully defended by Jones, second-highest all time in the UFC, behind Jimmie Rivera‘s 95.5%. Reyes’ 84% is fifth-best among light heavyweights.

2.03: Strikes absorbed per minute by Jones, the fewest among active UFC light heavyweights. Reyes is third, at 2.24.

2.79: Strikes landed for every one absorbed by Reyes, the best differential among active UFC 205-pounders (and ninth-best among all active fighters). Jones (2.28) is fourth among light heavyweights.

“Beating up on cans has got him convinced he’s a better athlete than most of the world. If he was so badass he would’ve won the California state wrestling championships, he would’ve went division one, He would have at least made a practice squad for the NFL. This man is delusional.” — Jones, tweeting about Reyes

“That’s why he’s not ever going to be on the Michael Jordan, Muhammad Ali level. No matter how many wins he gets, no matter how many titles he wins, he can’t get out of his own way. He’s just not a good person.” — Reyes, speaking on Ariel Helwani’s MMA Show about Jones

Cruz and Melendez on how Reyes can pull the upset:

It’s always the same problem when you’re trying to look for an upset of Jones. Where? Where does it happen? Reyes is very good but still relatively young in his career. Jones has advantages in experience, size and versatility. Reyes is composed, holds power in his left hand and is difficult to keep on the floor. All of those are great attributes, but they’re nothing Jones hasn’t seen (and dominated) before. Until someone does it, I don’t anticipate ever picking against Jones. Jones by submission, third round.

12: Stoppages by Shevchenko among her 18 wins. She has seven submissions and five KO/TKOs.

10: Decision victories by Chookagian among her 13 overall wins. She is one of just four fighters who have had their first eight UFC bouts go to the judges.

234-100: Significant strike differential in favor of Shevchenko in her four UFC flyweight fights.

6-0: Shevchenko’s record in UFC fights when earning multiple takedowns. When she doesn’t: 1-2.

“She hasn’t faced anyone with my style. I move, I don’t just stand there and go running forward, like the last few opponents. I utilize a lot of footwork and head movement, and I keep that pace up for five rounds.” — Chookagian, speaking of Shevchenko at a UFC news conference in December

“No offense to Katlyn, but all of my opponents — every one — were thinking before facing me that I didn’t face no one with the same style.” — Shevchenko at the same news conference

Cruz and Melendez break down the flyweights:

Chookagian is a technical stand-up fighter who does what she does well. But she lacks finishing ability, and Shevchenko seems to have the skills to beat her anywhere, in her area of strength on the feet or on the ground. Shevchenko via TKO, fourth round.

What else to look for … beyond the title fights

The rest of the card:

Facing Lewis is a big step up for Latifi

Look back at some of Derrick Lewis’ funniest one-liners throughout his time with the UFC.

It sure looks like the UFC is giving Derrick Lewis a showcase fight in his adopted hometown of Houston.

The big heavyweight opens the main card with a bout against Ilir Latifi, who comes in on a two-fight losing streak — at light heavyweight.

The 5-10 Latifi did start his career as a heavyweight, making his pro debut in 2008 against current UFC fighter Blagoy Ivanov, who coincidentally happens to be Lewis’ most recent opponent (Lewis won a split decision in November). But two fights later, Latifi moved down to 205 pounds and has remained there ever since.

Latifi is known as “The Sledgehammer,” and he might need one in the cage on Saturday.