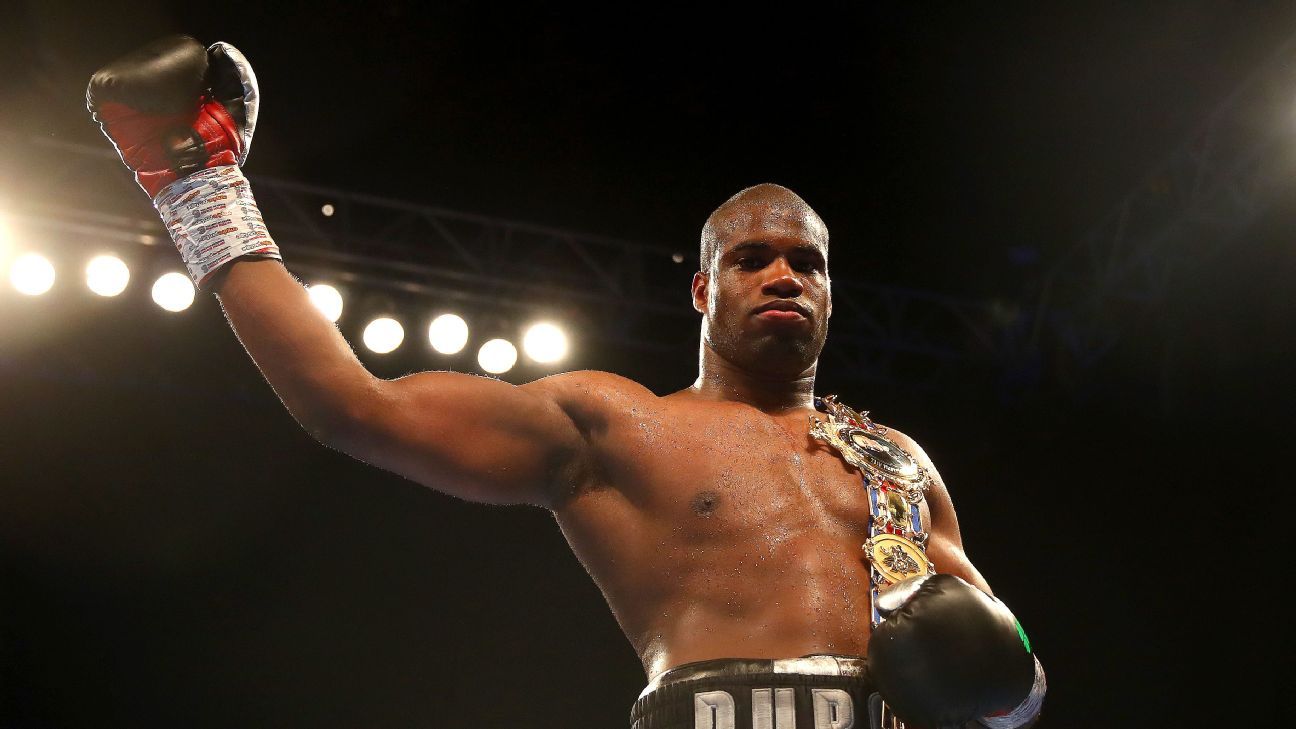 As red-hot heavyweight prospect Daniel Dubois was pulverizing Kyotaro Fujimoto into a second-round knockout on Dec. 21 in London, British countryman and fellow unbeaten big man Joe Joyce was ringside hoping a showdown with Dubois would be next.

And so it is as promoter Frank Warren, Dubois and Joyce appeared at a news conference on Friday in London to announce the much-anticipated fight.

The scheduled 12-round bout for various regional titles – as well as a chance for the winner to emerge as a serious contender — will take place on April 11 at the O2 Arena in London.

“People always talks about wanting the best to fight the best,” Warren said. ” Well, on Feb. 22 we have the No.1 and No.2 heavyweights in the world (Deontay Wilder and Tyson Fury) settling a score in Las Vegas, then in April we have the two best up-and-coming heavyweights in the world putting it on the line at the O2 Arena. It is a fight that needed to be made to see which man is ready to challenge the elite at the top end of the division and which one will reset and go again.

“This is one both men could easily have avoided and navigated a less perilous route to the top, but they want to get it on and give the fans what they want to see. When that first bell rings it will be edge-of-seat stuff.”

The fight will headline a BT Sports Box Office pay-per-view in the United Kingdom. It is likely to be streamed on ESPN+ in the United States — a deal is in the works — but that has not yet been made official.

“The contrast in styles will be fascinating,” Warren said. “Daniel being a classic banger with strong fundamentals and a ramrod jab that gets better all the time. Joe has got a style all of his own and comes at his opponents relentlessly from every angle. Can Daniel withstand the swarming force of Joe? Can Joe absorb the bludgeoning power of Daniel? We’ll find out soon enough.”

Known as “Dynamite,” Dubois (14-0, 13 KOs), 22, has moved quickly since his 2017 professional debut and has emerged as one of the most fearsome and exciting young heavyweights in boxing.

Still, Joyce looks to be a major step up in competition compared to those opponents, but the 6-foot-5, 240-pound Dubois said he is ready.

“This is the biggest fight of my career without doubt. This will be the fight that announces me to the world,” Dubois said. “I think I am better than Joe in every department. I have a better jab, I have better movement, I have more power. The only thing Joe has over me is experience, but he’s never boxed anyone as young and as hungry as me. This will be the most devastating performance of my career.”

Known as “The Juggernaut,” Joyce (10-0, 9 KOs), 34, claimed the 2016 Olympic super heavyweight silver medal after a controversial decision loss to Tony Yoka in the final in Rio. He has moved even more quickly as a pro than Dubois, mainly because of his advanced age.

“This is a massive fight,” Joyce said. “There’s no denying that there’s a lot on the line on both sides but experience is something you can’t buy and I’ve got tons of it and I believe it’ll play a huge factor in this fight.”