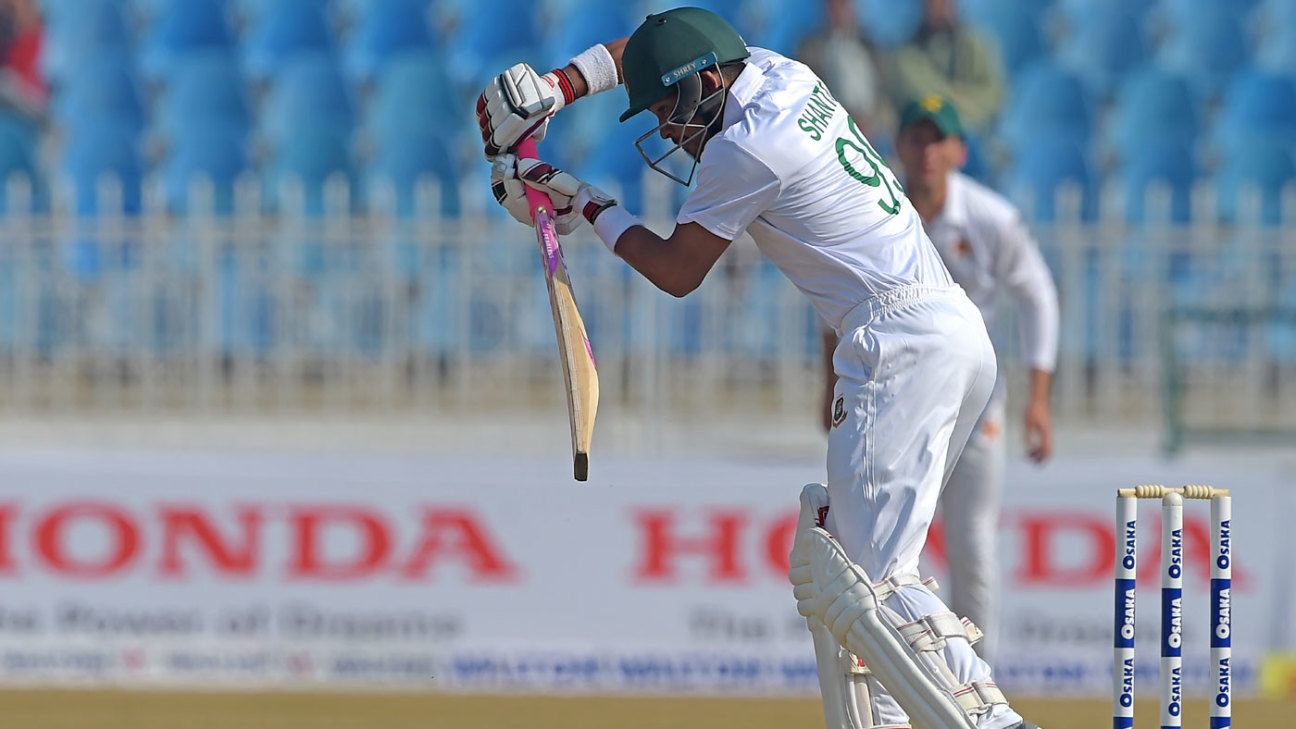 Bangladesh’s fight in the middle order was bookended by wickets falling cheaply in the first Test against Pakistan, as they were bowled out for 233 on the opening day in Rawalpindi. Bowling first after winning the toss, Pakistan dismantled Bangladesh’s top order to leave them 2 for 3, before the middle order rallied somewhat. But although there were three stands that crossed fifty, none went beyond 59. Najmul Hossain Shanto, playing in just his third Test, rued that the Bangladesh batsmen didn’t capitalise on their partnerships.

Shanto (44 off 110) had put on 59 for the third wicket with captain Mominul Haque, while the highest scorer of the innings, Mohammad Mithun, took part in stands of 54 and 53 for the sixth and seventh wickets. Shanto and Mominul were helped by Pakistan’s bowlers spraying the ball a little, perhaps becoming over-eager after the early strikes on a green top. However, the bowlers settled down and found a nagging length, and continued to strike regularly.

Six of Bangladesh’s batsmen – from No.3 to No.8 – got starts, going past 20 but Mithun’s 63 was the only fifty-plus score, a fact that Shanto described as disappointing.

“There was little bit of movement in the early few overs, but then later it turned into a good batting wicket,” Shanto said. “But I think we needed to be more patient. With early wickets there, we were under pressure but then the way Mominul batted it was good for us to go on. We needed to build on the partnership, have a stand of over 100 or something. Had we had a good partnership, it could have been different. I am disappointing that we didn’t capitalise.”

The day belonged to Pakistan, but Bangladesh can take some positives, having batted the whole day against hostile fast bowling. Shanto was optimistic that Bangladesh were still in the match and could learn from their first-innings experience.

“To me, the wicket was good for batting with not much seam movement after the first five to six overs,” Shanto said. “But Pakistan’s bowlers were patient kept on hitting the right line and maintained it. We, however, managed to get some runs on the board. We are still short of runs but if we get a few quick wickets then it will give us a chance. Whatever we have done is done, and we have to look ahead now and think about how well we can bowl. It’s challenging, but we obviously have to bowl well. I believe we can still get back in the game.”

Fitzpatrick enters busy stretch with neck injury
He’s no ‘messiah’ but Jones says Wallabies don’t know how good they can be
Mahomes: ‘Didn’t feel good’ but did enough in end
LeBron’s first triple-double of season lifts Lakers
Homa rallies from 5 shots down to win Farmers