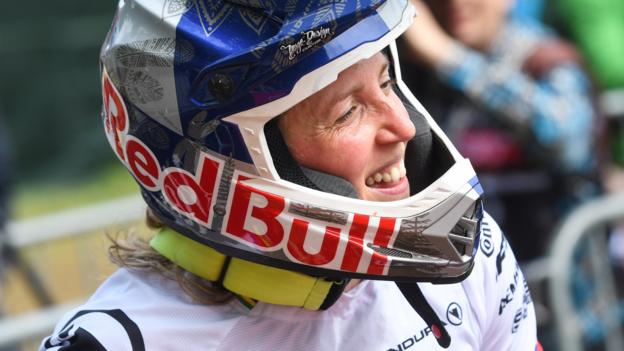 Rachel Atherton has targeted a return to fitness before downhill mountain biking’s first World Cup race of 2020 on Sunday, 22 March in Lousa, Portugal.

The five-time world champion has been out since rupturing her Achilles while competing in Les Gets, France, in July.

“It feels like it has been such a long time without riding the bike,” Atherton told BBC Sport Wales.

“I’m really buzzing to get back on the bike and I’m going to be pushing hard for that first World Cup.”

The 32-year-old has been back on the bike riding tentatively on her home trails in Wales since the new year and is now aiming to ramp up her recovery to be fully fit for the season opener next month.

“I’m definitely pushing for it and we’re going to do everything we can to get there and be fast,” added Atherton.

“If I don’t make it, it’s going to be the next race. Either way, I’m going to be stoked to be back on the bike, watching races, seeing what happens this year.”

Atherton, who has won 39 World Cup events, had surgery following the injury and for three months wore a cast, or protective boot, and was on crutches.

“It’s been frustrating waiting for the tendon to heal enough, so finally I can get back in the gym and start putting the weight on it to get the tendon strong,” she said.

“It feels a long time until I can ride big jumps and race tracks, but every little goal you reach – being able to do a squat, being able to put the weight up in the gym – that’s what you’ve got to focus on.”