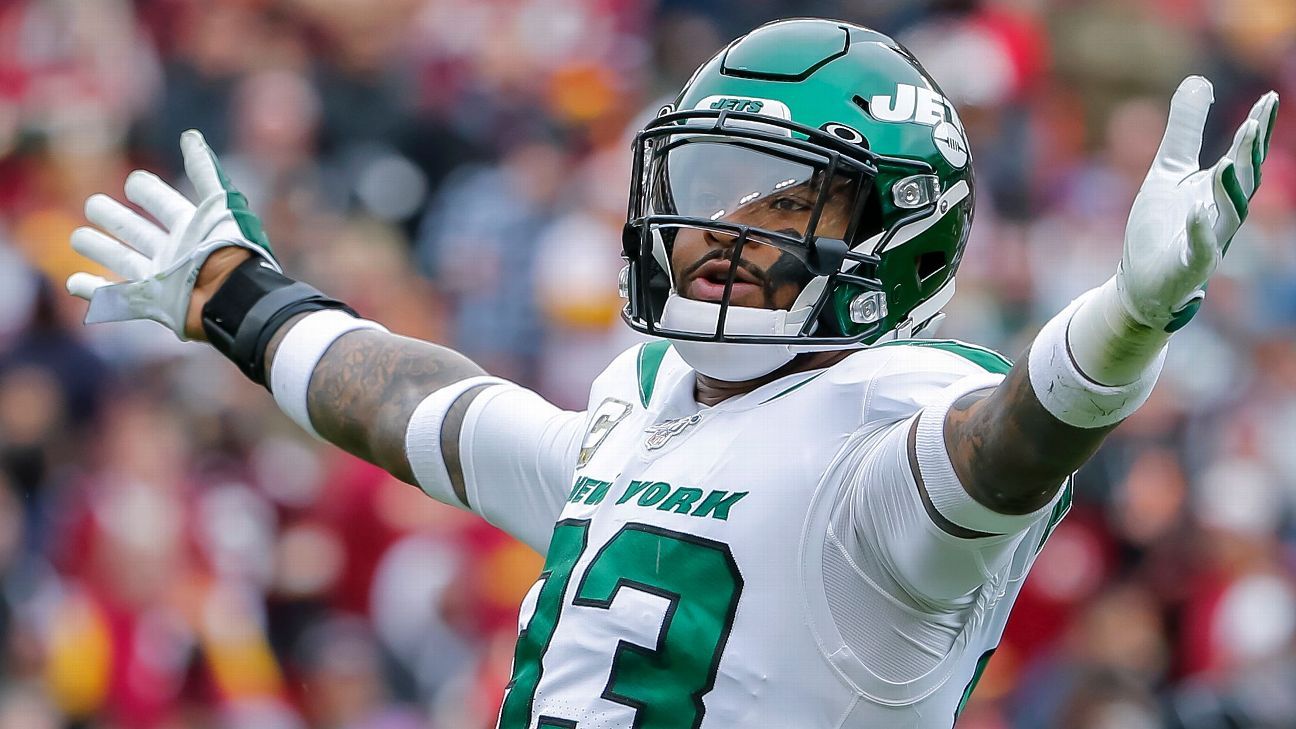 Jamal Adams has made his wishes clear: He expects a contract extension this offseason. The New York Jets‘ best homegrown talent since Darrelle Revis, the star safety wants them to show him the money — a lot of money — before he steps foot on the field in 2020.

And so begins one of the juiciest storylines of the Jets’ offseason.

Adams said last week the two sides have engaged in “small discussions,” although it should be noted the Jets have to yet to take a public stance. They haven’t ruled it out, but they haven’t expressed interest. There’s no sense of urgency to extend Adams’ current contract because they have rights to him for two more seasons, plus there’s the option of the franchise tag in 2022.

There are several layers to this story, largely because of the trading-deadline drama that caused a temporary rift between Adams and his bosses. The fireworks might not be over because the Jets are in no rush and Adams wants to reset the safety market, pronto.

Here’s a closer look at the key issues:

Has Adams outperformed his rookie contract?

Let’s put it this way: Adams and Eddie Jackson of the Chicago Bears are the only safeties who can boast two Pro Bowls and one All-Pro selection over the past two seasons. So the answer to this question is yes.

Adams, 24, is scheduled to make $3.5 million in 2020, the final year of a four-year contract that averages $5.6 million annually — 23rd among safeties, per overthecap.com (laughable). As the No. 6 overall pick in 2017, his entire contract was fully guaranteed — $22.3 million, which ranks fifth at his position (respectable).

Either way, it’s still below market for a player of his caliber.

If the Jets opt to kick the can down the road, they can secure his 2021 rights by exercising the fifth-year option in early May — a no-brainer that would cost a projected $9.9 million in ’21 salary. That would be guaranteed for injury only; it wouldn’t become fully guaranteed until March 2021.

If this drags out until 2022 — highly unlikely — the Jets could use the franchise tag. The amount will be north of $12.7 million, the projected franchise-tag tender for 2020 at the safety position. By 2022, it could be over $14 million, based on increases in the salary cap (assuming there’s a collective bargaining agreement for 2022).

If the Jets want to play hardball at the negotiating table, they could threaten to do nothing and say they will pay Adams at fixed prices for the next three years — roughly $27.4 million in total. That wouldn’t be good-faith bargaining and it would infuriate the Adams camp, likely resulting in a trade request.

Should Adams be the highest-paid safety?

We know where Adams stands on this; he has said numerous times he is the NFL’s best safety. You can bet your mortgage he’s looking to overtake Jackson, whose $14.6 million average per year is No. 1 at the position. Other comps are the Tennessee Titans‘ Kevin Byard ($14.1 million) and the Washington Redskins‘ Landon Collins ($14 million), both of whom signed before the 2019 season.

“If the Jets think Adams is better than Collins, then good-faith negotiations will be above his deal,” said former agent Joel Corry, a contract and salary-cap expert for CBS Sports. “Topping the [Jackson] deal should be Adams’ goal.”

Jason Fitzgerald, a contract and cap expert and founder of overthecap.com, believes Adams should aim higher than Jackson. The target, he said, should be middle linebacker C.J. Mosley, who’s the highest-paid player on the Jets ($17 million average annual salary). Fitzgerald’s reasoning is based on what team officials have said about Adams, whom Jets coach Adam Gase has called the “heart and soul of the defense.”

Damien Woody sparks a heated discussion with Domonique Foxworth on whether Jamal Adams should really be this upset with the Jets over the trade talks.

“Last year, they wanted C.J. Mosley to be the best player on the defense and they paid him $17 million a year — about $2 million or so above the going rate,” Fitzgerald said. “You can make a legitimate comparison for Adams. If he’s the star of the show, he should be getting a big premium like that over the highest-paid safety. I’d probably be asking for like $18 million. To make everything happy in his world, you’d probably have to come in right over Mosley at $17.1 million.”

Mosley received a franchise-record $43 million guaranteed at signing, but there’s no way the Jets will go that high for Adams. Among the safeties, the top guarantee on a second contract belongs to Collins ($31 million), per overthecap.com.

It’s not apples to apples, though, and that’s where it gets tricky. Collins and Mosley were unrestricted free agents and the subjects of bidding wars. Adams is under team control for at least two more years, which reduces his leverage. This point cannot be overstated.

Is a strong safety really worth that kind of money?

History tells us prolific interceptors are the first to get the big bucks because NFL general managers often fall for gaudy stats. Adams has two career interceptions, but he does have intrinsic value to the Jets and much of that value was created by the team.

General manager Joe Douglas, who listened to offers from the Dallas Cowboys at the NFL trade deadline in October, made it clear it would have taken a blockbuster package for them to have traded Adams. One report said the Jets were demanding a first-round pick and two second-rounders. Another report said the Jets asked for Cowboys All-Pro guard Zack Martin.

“It’s kind of contradictory to want something great to make a trade, then balk at paying top safety money,” Corry said.

Fitzgerald echoed that sentiment, saying, “There’s no way to say he’s not tippy-top of the market because you’ve already put him in the category of all the other superstar players.”

You can bet Adams’ reps will use this at the bargaining table.

As for his middling production as a ball hawk, it has to be a discussion point because great safeties are known for interceptions. The Pro Football Hall of Fame includes five safeties who played their entire career in the Super Bowl era, and their average is 49 interceptions per player. Of Adams’ peers, Byard has 17, Jackson 10 and Collins eight.

No doubt, Adams’ reps will counter by saying he plays a hybrid position, reducing his chances to make interceptions. In some ways, he’s like a “monster” back, roaming near the line of scrimmage. His biggest plays last season came as a pass-rusher (6.5 sacks). In fact, he rushed the passer on 93 plays, the second-highest total among defensive backs, according to NFL Next Gen Stats.

Jets defensive coordinator Gregg Williams tweaked Adams’ role, using him more as a “box” safety than the previous coaching staff. He lined up in the box on 41% of his snaps, up from 39% in 2018. His free safety snaps went up, too — from 45% to 42%. The big difference under Williams: Adams was used less in man-to-man coverage situations — 14% in the slot/cornerback, down from 19%.

In terms of role, Adams is much closer to Collins than to Jackson and Byard. As long as he is deployed in this manner, he probably never will have big interception numbers. Fitzgerald, for one, believes that shouldn’t affect his market value.

Bottom line: Adams is dynamic in what he is asked to do. “An absolute stud,” Douglas said.

What’s the benefit to extending Adams this offseason?

For one thing, perception. The Jets have a lousy track record when it comes to re-upping with their first-round picks, most of whom washed out and didn’t deserve a second contract. Adams is rare in that he actually has lived up to expectations. An extension would send a message to the locker room that players who perform will be rewarded.

It also would keep the Jets’ best player happy. There are those who believe he will complain and publicly pressure the Jets if he doesn’t get a new deal. That would reignite trade speculation when the draft approaches.

“The Jets came out of the whole trade thing with such egg on their face,” Fitzgerald said, alluding to October’s deadline fallout. “From a PR standpoint, you almost feel like you have to do this deal just to get it out of the way and stop it from being a distraction.”

Corry offered a practical reason for extending him now.

“It usually is more costly to delay signing a Pro Bowl-caliber player,” he said. “The price is only going to go up if Adams plays another year on his rookie contract.”

It behooves both sides to wait until the NFL free-agency dust settles before engaging in serious talks. The Denver Broncos‘ Justin Simmons and the Minnesota Vikings‘ Anthony Harris are expected to land big deals that could alter the safety market, which could help Adams.

At the same time, Adams isn’t priority No. 1 for the Jets, who must spend their cap money to address actual needs. Maybe, after free agency and the draft, they will move the Adams contract to the front burner.

But that’s hardly a guarantee.

So will Adams get a new deal or not?

Opinions are all over the map. One prominent agent, speaking on the condition of anonymity, said he doesn’t expect an extension in 2020. While acknowledging that Adams is “grossly underpaid,” the agent said the star player has “no leverage” because he is under team control through 2021. For that reason, he said, a training-camp holdout would be ill-advised.

“The Jets want it on their terms,” the agent said. “I don’t think the Jets will offer a deal that Jamal will accept.”

Fitzgerald believes an extension can be reached at some point in March. Corry didn’t sound optimistic: “Most first-round picks don’t get new deals after three seasons.”

Under the current CBA, 15 of 191 first-round picks from 2011 through 2016 received extensions after their third season. That 15 includes only four defensive players — defensive linemen J.J. Watt and Robert Quinn, linebacker Luke Kuechly and cornerback Patrick Peterson. All-world defensive tackle Aaron Donald didn’t get a new deal until after his fourth season.

Adams might have to wait, which won’t make him happy.

Pelicans call out refs as officials admit late errors
Boeheim on retirement chatter: ‘It’s my choice’
With Tom Brady retired, what are the Buccaneers’ QB options?
Serrano snags unanimous-decision win over Cruz
Rugby saved trans player Julie Curtiss, and she won’t let the RFU take it from her