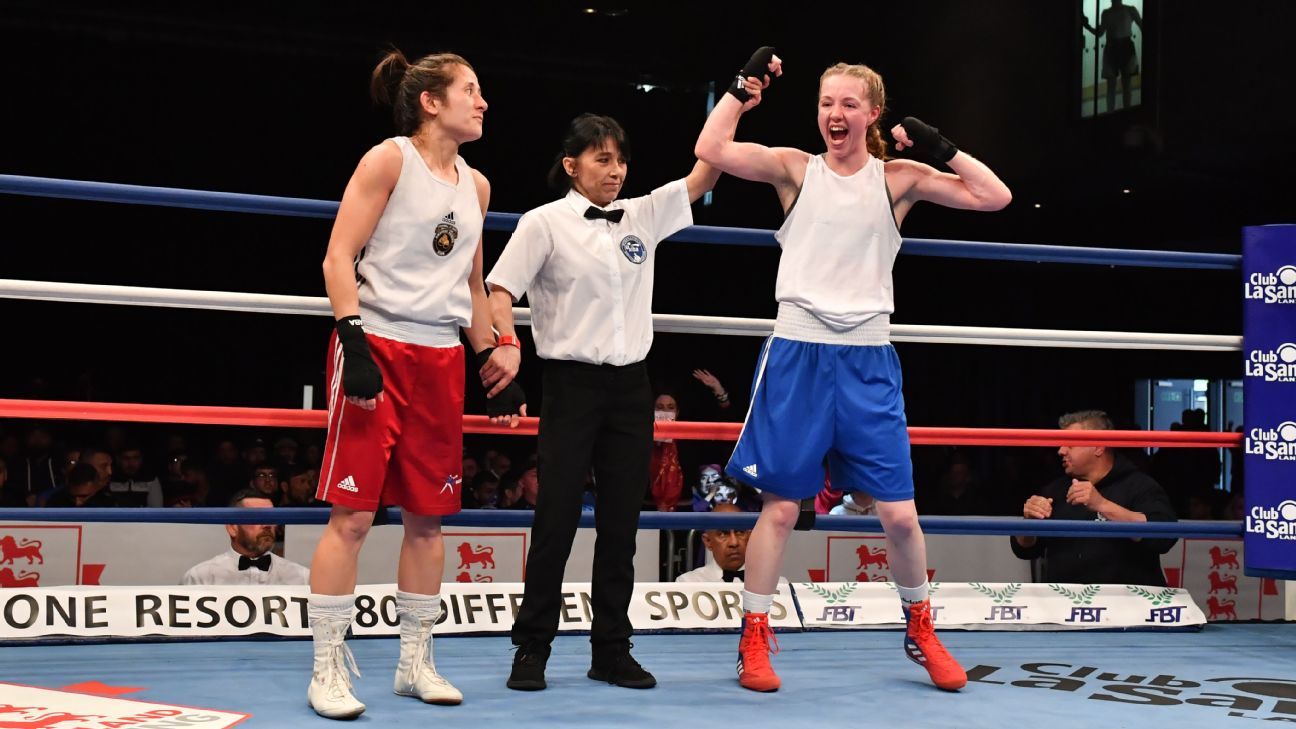 It is a very long way from sleepy Lowestoft to the boxing ring at the Tokyo Olympics when you’ve been away from the sport for seven years, stopped dreaming of glory and had three children.

Charley Davison is a few fights away from being one of Britain’s most remarkable Olympians after walking in from the wilderness late last year following a long break from boxing during which she gave birth three times. Now she has been selected for the European Olympic boxing qualification event at the Copper Box in East London in March.

Davison started to box when she was just 8 years old, following her father through the doors at the gym. By 16, she was representing England at major youth events, winning real medals. Then the children came, the boxing finished and that looked like it was that. But for Davison, now 26, the fairy tale is back on.

“I’m still taking it all in and it’s not easy — it’s hard to believe, and I never thought that after three kids I would be here,” Davison said on Wednesday at GB Boxing’s headquarters in Sheffield, on an afternoon when all 13 Olympic hopefuls were revealed; Davison is the only name that is a true shock.

“When I came up to the Sheffield for assessment [in December] I was weighing 54 kilos,” she added. “I wanted to get in the squad. I had been back boxing for two years and I just wanted to be part of the GB team — I was not dreaming of the Olympics then.”

Davison was selected for the gruelling two-week camp in Colorado, training alongside not just the best American fighters but a lot of the very best women from many other countries too. The brutal pre-Olympic international training camps are essential guides for the men and women in charge of selection; Davison was brilliant.

“When I first came back I was told that there is not a women’s weight [at the Olympics] at 54 kilos,” Davison said. She had won the GB title at 54 kilograms in 2019, a win that led to her being invited to Sheffield for an assessment week. “I dropped down to 51 kilos and came back in January on the weight. Then I went to Colorado for the training camp — I did well sparring with the No. 1 and No. 2. It was unbelievable, I was in my element.”

Nicola Adams is the double Olympic champion at 51 kilograms. She is permanently retired, and her great rivals from her long reign in Britain have turned professional. There was a chance that Demi-Jade Resztan, who won European silver and World bronze last year at 48 kilograms, would gain weight and get selected.

However, Resztan has been unwell, and that left an opening for Davison. In 2011, the now mother of three won the Youth World silver and the Youth European bronze. She has form, make no mistake. She clearly deserves the selection after her performance at the USA Boxing high-altitude training facility in Colorado and the torrid sparring sessions, in private and behind closed doors, at the Great British Boxing’s HQ.

It can be savage and bloody behind those doors in the three sparring rings and that competition intensifies when a selection process is underway. “You have to go in with all the other girls — it’s hard.” As Karriss Artingstall, the boxer selected at 57 kilograms, puts it: “You have no friends at your weight — it’s all about you.”

For the past week, Davison’s three kids — aged 7, 5 and 3 — have been with her grandmother. During the trip to America, their father had to take time off work to be with them.

I have been writing about Olympic boxing since the awful days of Seoul back in 1988, and I have never heard a single male boxer discuss the juggling act that he has put in place to make sure that his children are fed and put to bed safely. It seems that Davison is fluent at making things run smoothly when she is away. It’s called being a good mum.

“I have people to help me and without them, I would not be in this position,” she said, but it still sounds like a difficult job.

“I remember when I was told I was going to the Olympic qualifier, I stopped commuting and moved to Sheffield full time,” Joshua Buatsi, who lived in London at the time, said. Buatsi changed his lifestyle, qualified for the Rio Olympics and came back with a bronze medal.

That is how important the next six weeks before the start of the qualifier will be for Davison, as well as the other four women and eight men selected. It is the third Olympics for women in boxing, the first with five weights, and that has not reduced the potency of the final selection — it is hard to see how two weights could have been missed out.

Davison will be joined at the qualifier by middleweight Lauren Price, who has won the World Championship, the European Games and the Commonwealth Games. Rosie Eccles was picked over Sandy Ryan, who has been battling various ailments for six months, at 69 kilos and she has a Commonwealth Games silver and a European silver and bronze.

At 57 kilograms, Artingstall, who is a soldier, has a bronze from last year’s World Championships and a silver at the Europeans, and at just 19 years old, Caroline Dubois is the baby in the team at 60 kilos; Dubois has won the triple at Youth level: World, European and Olympic gold, and she is unbeaten. It is without any doubt the most powerful squad of women ever assembled and sent to a major event. The GB system in Sheffield is the envy of the world, make no mistake.

The women all have to reach a minimum of the quarterfinal to get even close to a place in Tokyo. There are six spaces available at 51, 57 and 60, five at 69 and just four at 75 kilograms. There will be a final Olympic eliminator in Paris in May to fill a few empty spaces. However, none of the British boxers plans on spending 10 days in Paris in springtime. They are not here for flowers, and nobody knows that better than Davison.