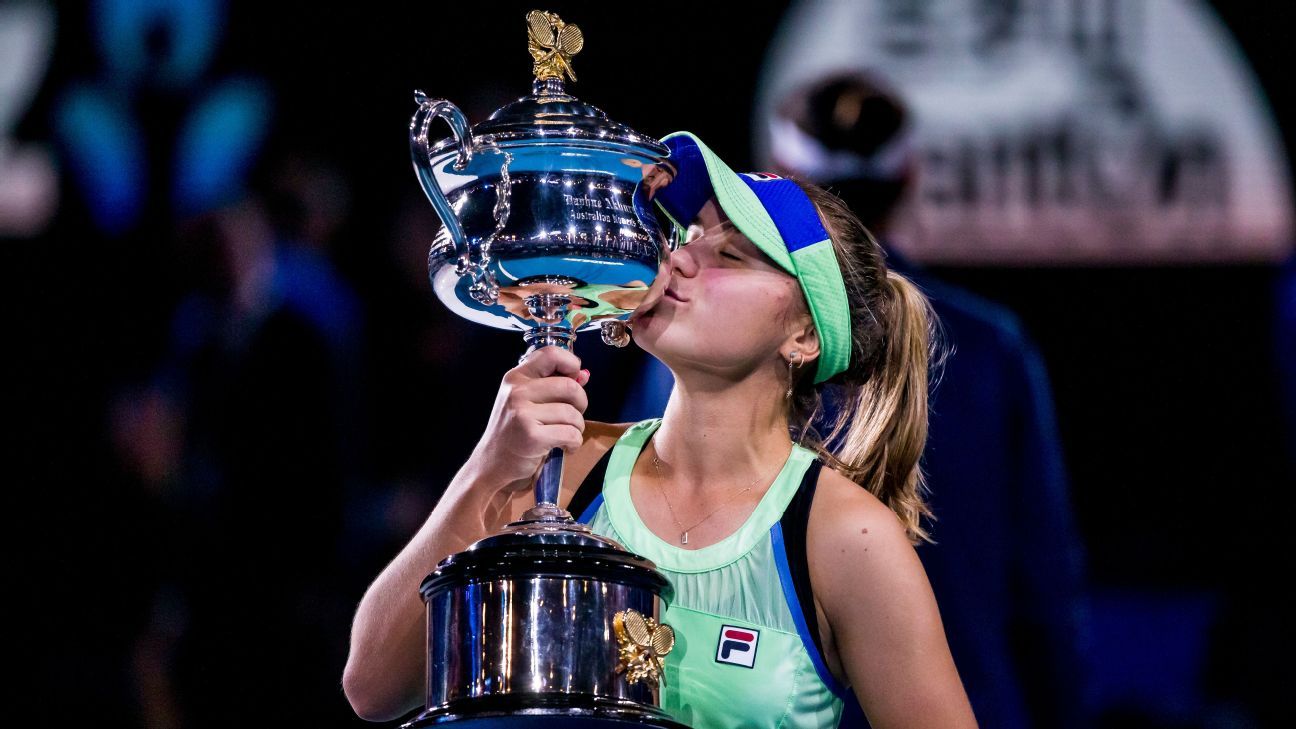 MELBOURNE, Australia — With the bulbs of the cameras flashing incessantly around her, Sofia Kenin hoisted the Daphne Akhurst Memorial Cup on Saturday night at Rod Laver Arena after enamoring audiences around the world with her aggressive play, relentless self-belief and endearing speech about her lifelong dream coming true. It was the 21-year old’s maiden Grand Slam title, and she became the first American to win a major since Sloane Stephens in 2017, and the youngest to do so since Serena Williams in 2002.

But while her victory signified her arrival among the sport’s elite, in many ways, no matter the outcome in the Australian Open final, Kenin and her fellow countrywomen had already made sure the tournament was very much a win for American tennis.

That was perhaps no more on display than Kenin’s fourth-round match against Coco Gauff a week earlier. The 15-year old Gauff has become something of a global sensation over the past eight months with a fourth-round run at Wimbledon and a trip to the third round at the US Open, charming fans with her fearless game and tremendous poise.

“Cocomania,” as it’s affectionately called, officially reached its third continent when Gauff defeated defending champion Naomi Osaka in the third round in straight sets. The hype surrounding her was at a fever pitch when she took the court in front of a capacity crowd at Melbourne Arena to take on Kenin. The match dominated the headlines — on Australia Day, nonetheless — and made it clear they would be very much a part of tennis’ future for years to come.

And they certainly aren’t the only American women notching remarkable results these days. Far from it. In the latest rankings, 17 Americans are in the top 100 and 30 in the top 200, ranging in age from Gauff (No. 52) to 39-year old Venus Williams (No. 67). In between them are other young talents like Gauff’s doubles partner Caty McNally and 2019 French Open semifinalist Amanda Anisimova, both 18; established stars and regular contenders Stephens and Madison Keys (whom Stephens beat in the 2017 final in New York); journeywomen who have finally seemed to hit their stride like Alison Riske, Taylor Townsend and Kristie Ahn; former NCAA stars like Danielle Collins and Jennifer Brady; and, of course, 23-time Grand Slam champion Serena Williams.

The Americans will also get a chance to team together this weekend in Everett, Wash., as Serena, Gauff and Kenin team up for the United States in Fed Cup qualifiers against Latvia.

“I feel really bullish right now about the state of American women’s tennis,” said Pam Shriver, the 21-time major doubles champion and ESPN analyst, on Sunday. “There are so many incredible young players, starting with Coco and McNally, who I think is just such a great athlete, and of course Kenin. But then the list really goes on and on.

“And, don’t forget, there’s still Serena. Does she have another one in her? Maybe, but I’m not sure, and I don’t think it’s as vital for the sport and the country as it once was, because I think it’s in such great hands now.”

“There are so many incredible young players, starting with Coco (Gauff) and (Caty) McNally, who I think is just such a great athlete, and of course (Sofia) Kenin. But then the list really goes on and on.”

While Serena is considered one of the best to ever play the sport, she has been an outlier of sorts. Venus has seven major titles, but hasn’t won once since 2008. Prior to Kenin’s victory, Stephens had been the only other winner from the United States since then. Many were concerned there would be no one able to carry the torch once Serena eventually retired, but it seems now there are several who could do just that.

Kenin has mentioned two different experiences that prepared her for the sport’s biggest moments: beating Williams in the third round at last year’s French Open and being part of the Fed Cup final in 2018. As many of the United States’ biggest names were sidelined, she joined Collins, Riske and Nicole Melichar in Prague, and although she lost her singles match in three sets, she considered that result invaluable toward her growth.

She is grateful for the support from team captain Kathy Rinaldi and will be back with the team in its 2020 debut next week in Everett, Washington.

“It’s such an honor for me to go to Fed Cup,” she said after Saturday’s win. “I love coming there, I love being on the team with her. It’s such a great team spirit.

“I’m sure she’s going to give me the biggest hug once I get there. Just tell me, ‘I always believed in you, kiddo. Let’s take this Fed Cup now.’ When she invited me to Prague to play for the final, I feel like after that I really got to experience what it’s like. It was a huge stage, the best arena.”

While the current team has a bigger mix of ages and generations (Serena, Gauff, Riske and Kenin’s 34-year old doubles partner Bethanie Mattek-Sands round out the squad), Shriver believes being a part of the a team, especially one like the 2018 group in which everyone was closer in age, helps fuel all of them.

“It’s such a perfect thing having a bunch of them all within a few years of another,” she said. “They all compete with each other, and in turn, it makes them better.”

The American men have not been as successful as their female counterparts, particularly during the reign of the “Big Three” — Roger Federer, Rafael Nadal and Novak Djokovic. There hasn’t been an American male singles champion since Andy Roddick at the 2003 US Open.

Tennys Sandgren, who entered the tournament ranked No. 100 in the world, was the only American man left standing by the quarterfinals in Melbourne, but he ultimately lost to Federer in five sets in heartbreaking fashion. He did jump 44 spots in the latest rankings, and is now the fifth-ranked American. John Isner is the lone representative in the top 20. There are eight in the top 100 and 14 in the top 200.

As tennis is largely considered the most lucrative of the professional sports for women, it is obvious why it tends to attract some of the world’s greatest female athletes.

Kenin’s family, which emigrated from Russia when she was an infant, followed the blueprint set by five-time Grand Slam champion Maria Sharapova in getting into the sport. Gauff’s father has talked about watching and learning from Serena and Venus Williams and their father Richard. Seeing these examples perhaps makes the game seem more accessible for interested young players than it previously did.

For aspiring male professional athletes, there are many avenues they can go for financial stability and wealth. In the United States, that often means the best young boys gravitate toward sports like basketball and football, which also garner significant more attention than tennis does. Simply put, there is much more competition fighting for boys’ interests and time.

“I’ve been saying this for years and years, but until our sport can figure out how to market itself to families and communities of all types, to get the best athletes hooked at an early age, it’s not going to happen,” Shriver said. “You can’t just have a good athlete who is great at tennis, it needs to be a great athlete who is also great at tennis in order to be at the top of the men’s game, like Federer, Nadal and Djokovic. When you look at our best male tennis players in the last 10 years, they don’t add up to there.”

But it’s not all doom and gloom for the men. Rajeev Ram won his first major doubles title on Sunday, with partner Joe Salisbury of the United Kingdom, and Bob and Mike Bryan have won 16 together as one of the most successful pairings of all time (and Mike won two additional Slams with American Jack Sock in 2018). Still, doubles doesn’t quite carry the same significance or weight as singles does.

So for now, the American women will do the heavy lifting for the sport in their home country. Kenin is now No. 7 in the world and the top-ranked American. It was clear that meant something to her, and she knows it’s about more than just her.

“I love representing the U.S., I just love it,” she said. “It’s an honor. Everything is coming into place, a dream come true. Everything I’ve done, all the hard work I’ve been doing is paying off.

“Everything is just still a blur for me. I just can’t believe what happened. It’s just great. I feel like I’m doing some great things for American tennis.”