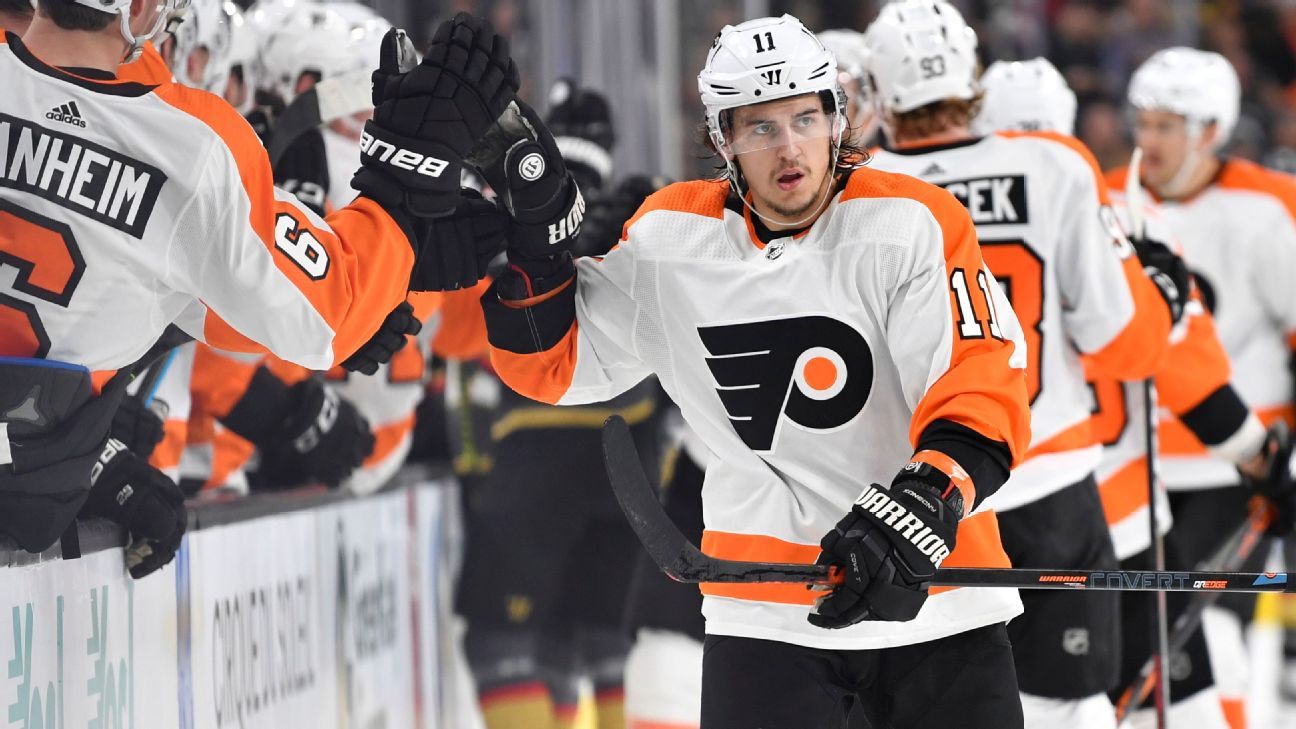 The first time Travis Konecny met Alain Vigneault, he wasn’t sure what the new Philadelphia Flyers coach knew about him, or what preconceptions he might need to shatter. But he got his answer when Vigneault handed him a sheet of paper. It was blank.

This wasn’t a pop quiz, but rather a challenge to Konecny to define his game. The 22-year-old forward had established himself as a dependable depth scorer for the Flyers, with 24 goals in each of the previous two seasons. He had also endeared himself to Philadelphia fans for his on-ice agitation: His run of taunts against the Pittsburgh Penguins in their Stadium Series game last season featured such moments as Konecny calling Evgeni Malkin a “f—ing nerd.”

“I don’t want to say he’s a goofball, but he’s not afraid to mess around on the ice. Throw jokes out there, under his breath. Dry humor,” said former Flyers defenseman Derian Hatcher, who coached Konecny with the Sarnia Sting in the OHL.

But despite that early success, Konecny knew he could offer more than that to the Flyers. And his new coach had literally handed him a clean slate.

Here’s what Konecny has filled the page with this season:

And that’s all while still being the fast, tough and irritating forward he’s been since entering the league in 2016.

“His compete level is so high,” Hatcher said. “He can go in there and play on the third or fourth line, too, and a lot of players can’t do that. It’s a compliment to the way he plays and his drive.”

Hatcher is the least surprised person that Konecny, who was taken 24th overall in the absolutely stacked 2015 NHL draft, has developed into an All-Star. But he did say he was amazed to see the way Konecny starred for the Sting after they acquired him from the Ottawa 67’s in 2015-16.

“We were surprised, to be honest. He was a point-per-game player with Ottawa, and then he came here and just lit it up. I don’t know if it was the change in scenery or what, but he averaged like two points a game,” Hatcher said. “We always knew he played exceptionally hard. That his skating was good. But once we got him, we were surprised by him.”

The Flyers knew he had the offensive skill to hang with their elite players, and Konecny has played more minutes with Claude Giroux than he has any other Philadelphia forward in the past two seasons. And the Flyers scored 53.3% of their goals when the duo was on the ice together at 5-on-5 over the past 132 games, per Natural Stat Trick data. But it’s also been advantageous to Konecny’s maturation in the NHL. Much like Jaromir Jagr used to set the fitness standard for a 24-year-old Giroux during his season with the Flyers, Giroux now does the same for Konecny.

“I’ve learned a lot from him on the ice and off the ice. When I see him coming to the rink every day … I’m sore. I’m not putting in the effort. But he’s already stretched out, doing a workout and pushing sleds,” Konecny said of Giroux, “and I’m thinking if my captain can be doing that, working that hard, then everyone else on the team should be doing the same thing.”

It’s also been easier to buy what the new coaching staff is selling when players such as Giroux and Jakub Voracek clearly do.

“Everyone on the team has bought into the new systems, the new approach that our coaching staff has brought to us. And it’s been awesome seeing the top guys doing whatever they can to win games. Gio and Jake, blocking shots and stuff. Doing whatever it takes,” Konecny said.

Off the ice, Konecny has been inspired by another Flyers teammate. He’s close friends with forward Oskar Lindblom, who left the team in December after being diagnosed with Ewing sarcoma, a rare form of bone cancer. Konecny said it was an emotional moment when Lindblom returned to be around the team.

“It was pretty touching. Oscar’s a good buddy of mine. For him to come in with the positive attitude that he did just lifted everyone. It’s hard to put into words what he did for our team, but his spirit and his smile … everything that’s going on with him, he doesn’t deserve. But everyone’s thinking of him and praying for him every night,” Konecny said.

When Lindblom left for treatment, he and Konecny were leading the Flyers in scoring. Konecny has remained a model of consistency all season, having yet to go more than three games without a point.

To have a strong season anywhere is good. To have one in Philadelphia means that some of the most passionate critics in the NHL are going to be your most passionate boosters.

“Everyone’s probably biased for their own team and their own fans, but it’s generally great to be an athlete in Philly,” Konecny said. “They’ll be there for you, no matter what. They’re going to cheer for you when you’re doing great, and they’re going to hold you accountable when you’re not. And that’s good for you. When you come home, you have to win games, because your fans expect you to be great.”

And if you aren’t great? That’s fine, too, Konecny said. He welcomes any Flyers fan ire directed his way, should his play warrant it.

“I honestly do,” he said. “And you can’t go against it. That probably wouldn’t turn out OK for you.”

Hudson eyes USMNT growth amid leadership void
McIlroy vs. Reed in Dubai, Max Homa’s rise and more from the PGA Tour
Flightline run away winner at Eclipse Awards
What does the hiring of Sean Payton mean for Broncos and Saints? Answering the biggest questions
Source: Chiefs TE Kelce (back) expected to play