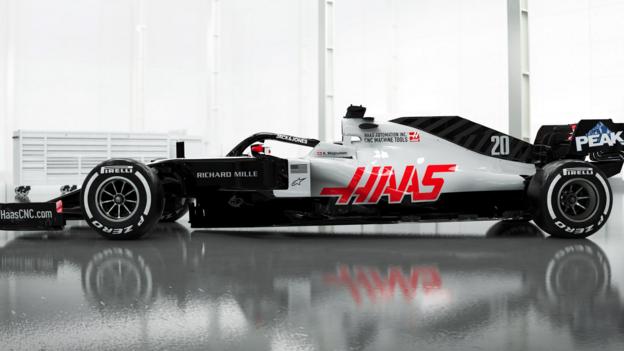 US-based Haas have become the first Formula 1 team to release images of their new car for the 2020 season.

And the team hope it can lead to a revival after dropping to ninth in the constructors’ championship last term.

Haas’ form fluctuated dramatically through last season, with the car competitive in the midfield some weekends, and close to the slowest in the field on others.

Haas, whose machine tools company funds a large part of the team’s budget, said: “We’ve been through a real education process, one that comes to all Formula One teams at some stage. I’m trusting we’ve learned from those lessons and have applied that knowledge into making the VF-20 a more competitive entry.

“It’s important to me that we’re back in the mix and consistently scoring points. We certainly have the capability and we’ve proved as an organisation we can do it.”

Team boss Guenther Steiner, who will be under pressure to ensure the team’s performance moves forward this season, said: “With the regulations remaining stable into this season, it’s allowed us to improve our understanding of the car and to scrutinise ourselves more in order to find solutions and applications to channel into the design of the VF-20.

“Last year was definitely a setback, one I would never have asked for, but you learn from such situations – we all have. Everybody at the team was forced to look at themselves and understand what they can do better.”

The car, which is an obvious evolution of last year’s, will be officially unveiled on the first morning of pre-season testing, at Spain’s Circuit de Barcelona-Catalunya on 19 February.

Augusta Women’s Amateur gets top 45 in world
Larkin hopes to stay in Detroit as talks continue
How to watch the 2023 Caribbean Series on ESPN Deportes and ESPN+
Which teams should you buy or fade ahead of March Madness?
5 ejected after punches thrown in Magic-Wolves