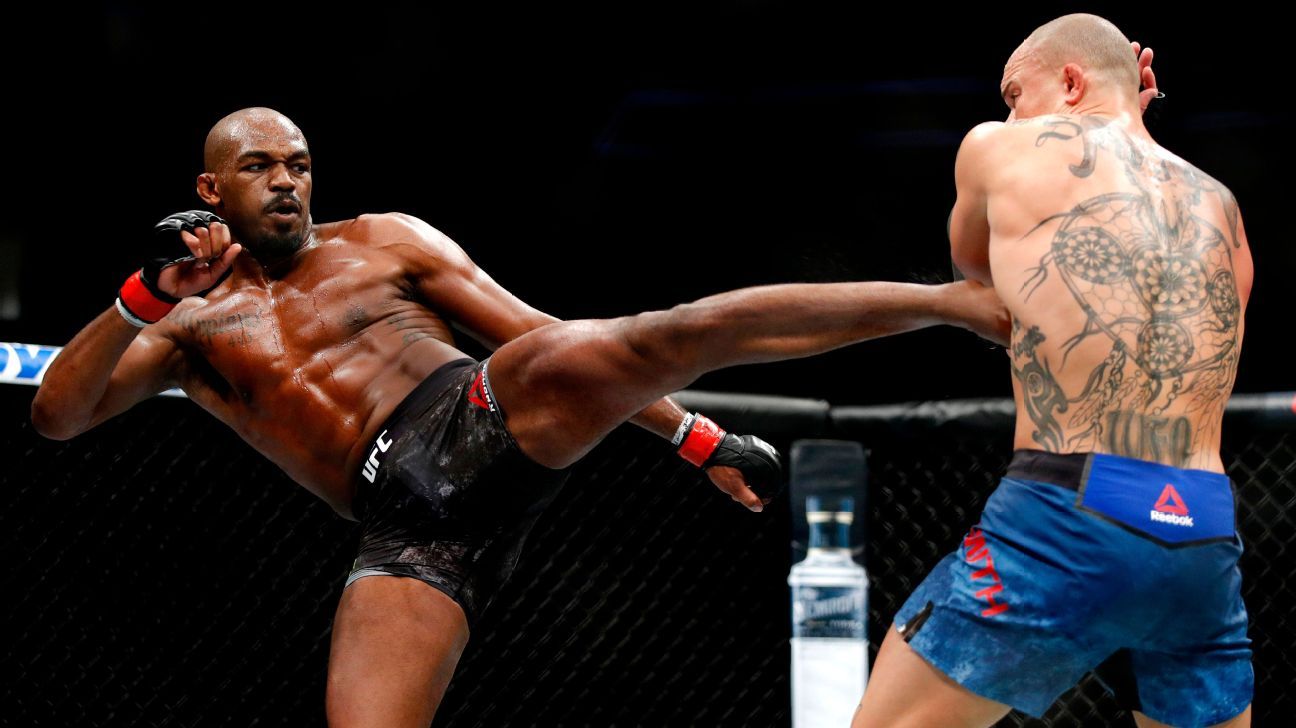 I want to be clear about something right off the bat: I think a lot of people are sleeping on Dominick Reyes this weekend.

I think of Jon Jones‘ past three opponents (Alexander Gustafsson, Anthony Smith and Thiago Santos), Reyes has the best shot to unseat Jones.

In fact, I’m getting a little bit of a Chris Weidman vs. Anderson Silva 1 circa UFC 162 vibe going into Saturday. Long-reigning champion going up against relatively unknown undefeated contender whom the champion might or might not consider to be a legitimate threat.

The biggest difference between the two scenarios is that Silva seemed tired of being the middleweight champion of the UFC by the time he met Weidman in July 2013, and I don’t get the sense from Jones that he is tired of being the king, but I do wonder if he’s getting a little bored these days.

The truth is Jones became a legend by beating legends. Remember his first five title fight opponents? Shogun Rua, Quinton Jackson, Lyoto Machida, Rashad Evans and Vitor Belfort — all future Hall of Famers and all legends in their own right. We had never seen a run like that before, and there is a good chance that we will never see a run like that ever again.

No disrespect to his recent opponents, but they aren’t Hall of Famers — at least not yet. This is a result of his being champion for nine years and almost cleaning out a division.

This is why people seem to be sleeping on Reyes this weekend. Just like Jones, they seem to be bored of seeing Jones fight non-legends.

How does he rectify this?

Well, first he has to win on Saturday. If he is truly looking past Reyes, that’s a big mistake. I think his revelation to me last week that he enjoys a drink or two or three before fights is a little worrisome. That’s OK at 24 years old. But at 32? I wonder.

But let’s just say, for the sake of this column, Jones wins on Saturday. Then what?

Should he beat Reyes on Saturday, I would advise against his moving up to heavyweight. Stick around for one more light heavyweight fight. Yes, I know I just talked about the need to fight legends, but since Corey Anderson and Jan Blachowicz are fighting seven days later, I’d turn around relatively quickly, say June or so, and fight that winner. The timing is too perfect.

That will get Jones active again and buy him some time for the Daniel Cormier and Stipe Miocic trilogy to play out (more on that in a moment).

If that June fight goes well for Jones, then attempt to return in November at Madison Square Garden. Jones, a New York native, has yet to fight in his home state. Imagine fighting for the heavyweight belt against either Miocic or Cormier — or for the vacant title if Cormier wins the belt and retires — at the Mecca. And then imagine that he wins his second belt at the World’s Most Famous Arena. Now we’re back to talking about legendary moments and nights.

To recap, for Jones to get some shine back, it’s imperative that he does three things this year:

1. Finish Reyes on Saturday or, at the very least, attempt to. Can’t have the fans booing you like they did in July.

2. Quick turnaround in May/June against the winner of next weekend’s main event in Rio Rancho, New Mexico.

3. End the year fighting for the heavyweight title, preferably at MSG.

Oh, and most importantly, stay out of trouble. It’s true that Jones had a relatively tame 2019. But he pleaded no contest to disorderly conduct in October. In New Mexico, no contest is considered a concession of the charge without admission of guilt or mounting any defense.

I know he says he can’t guarantee that he will stay out of trouble for 10 years, and at the very least, I appreciate his honesty, but we want to see him at least try.

A couple of years of staying out of trouble and big fights won’t erase his checkered past but will go a long way in redefining his legacy.

On the flip side, we have Valentina Shevchenko. I love watching her fight. One could argue that she is just as dominant as Jones versus unheralded competition, but she’s newer to the scene, so I don’t mind this as much.

As I’ve said time and again, I don’t think we’ve ever seen a talent gap quite as large as the one between Shevchenko and the rest of the contenders at 125 pounds. She’ll likely lose again at some point — because everyone does — but I don’t see it happening at 125 anytime soon. Shevchenko never appears to lack focus or drive, so I don’t think she’s capable of slipping on a banana peel.

Simply put, it is a pleasure to watch her compete. No drama, subtle trash talk, pure dominance each and every time out. What more could you want as a fan?

Back to Miocic, here’s the latest: I was told by a source close to him that they have another eye doctor appointment scheduled for late this month/early next month. If all goes well during that appointment, there is a chance that he will be cleared to fight later this year. If he is cleared to fight later this year, he’ll shoot for a return in the summer.

Of course, a lot has to happen between now and then, but first things first: He has to make sure his eye is good to go. His team doesn’t want him to consider fighting if his eye isn’t fully healed.

I’m told the UFC, to its credit, isn’t putting pressure on Miocic just yet, which is nice to hear. Will that change in the coming months? Maybe.

For now, let’s hope all goes well with that appointment in a few weeks, he gets cleared to fight in the summer, and we get to see that Cormier trilogy fight before kids go back to school in August.

Colby Covington calls out 50 Cent for a celebrity boxing match, in which Covington says he will tie a hand behind his back.

Remember after UFC 245 when people said Kamaru Usman served Colby Covington some humble pie and that the next time we heard from him, he’d be tamer? Remember when I told you there was no chance that would happen, and the better bet was that he would be even more controversial next time?

After a brief hiatus following his loss to Usman, Covington returned with a vengeance on Monday. His main goal: He wants an immediate rematch with Usman, or he’s sitting out. (I know he called out 50 Cent, too, but until Fiddy responds, and even if he does, I’d classify that one as super long shot at best.)

Honestly, I’d love to see that title fight again. It was a tremendous battle. But I’d be shocked if the UFC ran that one back right away, for several reasons:

1. They don’t usually grant immediate rematches to challengers who were stopped in a title fight.

2. They seem to really want to book Jorge Masvidal vs. Usman next.

3. Dana White doesn’t have the best relationship with Colby Covington, to put it mildly.

Unfortunately for Covington, I think there’s a much better chance that he sits out than that he gets a title shot next.

I’d love to see Covington fight a Michael Chiesa, or anyone else for that matter, next, and if he wins that fight, then go for the belt. I don’t think sitting out does him much good. But I appreciate his conviction.

Jorge Masvidal and Kamaru Usman get into a war of words after they run into each other at radio row in Miami.

Speaking of Masvidal and Usman, I saw a lot of people call their verbal altercation at Super Bowl radio row last week “staged” because there were multiple camera angles of it. This is a silly take. As I’m sure most of you know, radio row is the epicenter of sports media that week. There are a ton of media members standing around with phones ready to capture any kind of viral content they come across. The idea that a bunch of media members whipped out their phones to capture two UFC stars jawing back and forth isn’t exactly far-fetched, nor is it a sign that the altercation was staged. Stop with the cynicism, people.

But that wasn’t fixed or staged. Jorge Masvidal doesn’t play that way.

Also, while I understand why White had to publicly admonish the altercation, don’t think for a second that they won’t use that footage to promote the fight, should it happen.

I still can’t believe Anthony Smith was on the verge of amputating his finger in order to resume his fighting career. If you haven’t heard that story from Monday’s show, do yourself a favor. … Am I the only one who is into Logan Paul vs. Dillon Danis in Bellator? … I can’t get enough of the Jon Jones-Israel Adesanya feud. … Other than the main event, the UFC 247 fight I’m most looking forward to is Derrick Lewis vs. Ilir Latifi. Lewis fighting in his adopted hometown of Houston is always fun, and I’m curious to see how Latifi looks at heavyweight. … If Masvidal vs. Usman is truly next, then the race to fight Conor McGregor next is likely down to Justin Gaethje or Nate Diaz. Last I heard, no decision yet. … Thursday is the NBA trade deadline. Imagine if there were an MMA trade deadline? How much fun would that be?!

What to know for Niners-Eagles, Bengals-Chiefs: Score picks, bold predictions, stats to know
Mandhana and Harmanpreet bludgeon West Indies in dominant win
AD to come off bench as Lakers manage minutes
After a frustrating Australian Open exit, Coco Gauff looks to the future
Barkley not looking to reset RB market with deal