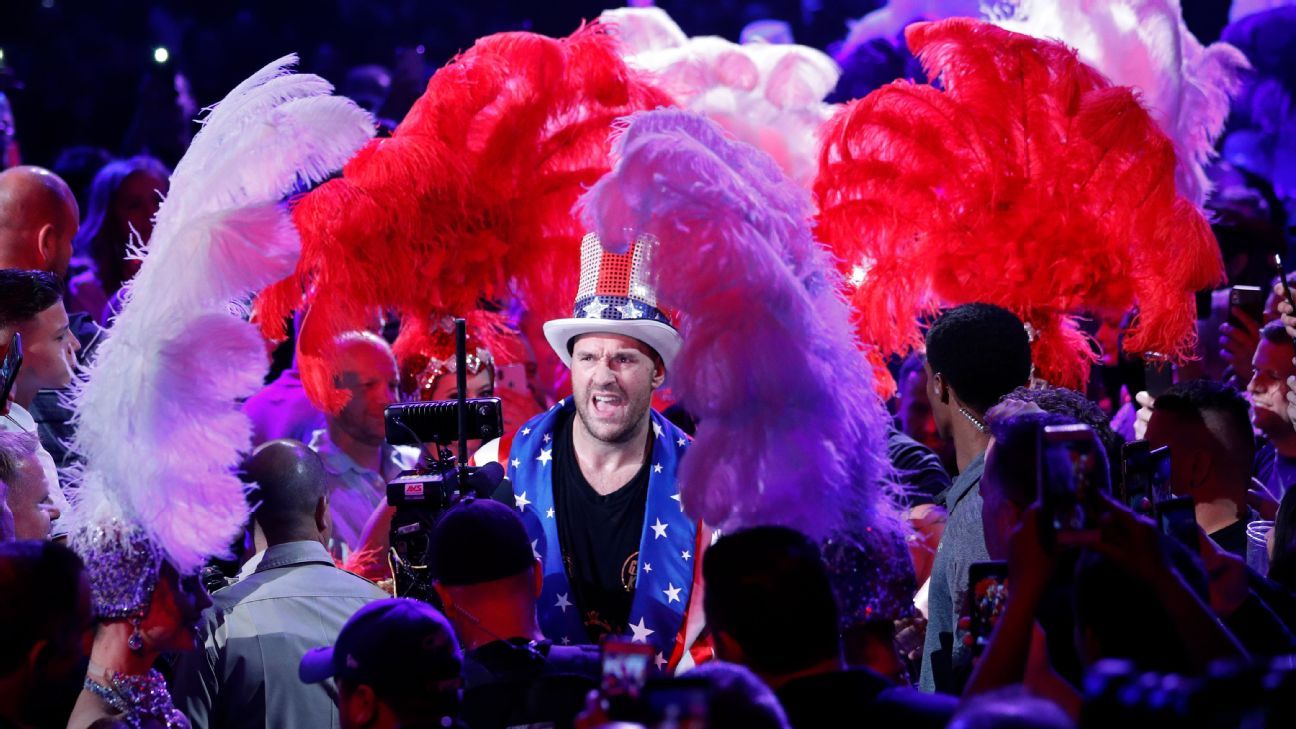 Tyson Fury is a 6-foot-9, 250-pound fashion plate who makes a sartorial splash whether he’s walking into a boxing ring or a news conference.

He has been Batman, Apollo Creed and a lucha libre wrestler, and look for him to push the envelope again during the buildup for his Feb. 22 showdown with Deontay Wilder.

“I wish I can say what’s coming,” says Nav Salimian, a tailor who’s worked with Fury the past five years. “All I can say is it’s really crazy, vibrant stuff.”

And that’s just for the news conferences.

Salimian, who is also the marketing director for clothier Claudio Lugli, has worked with UFC stars Conor McGregor and boxer Amir Khan. His work caught the eye of Fury, who wanted something nice to wear for his media tour before facing Wladimir Klitschko on Nov. 28, 2015.

Salimian was in the audience for a Sept. 23, 2015 news conference in London, eager to see Fury attired in one of his suits for the first time.

“And then I saw him come out in the Batman outfit,” Salimian said. “I was like, ‘Wait, hold on.’

“But he used the Batman outfit to set up the Bruce Wayne look, which was our suit. That’s when I realized Tyson has a great sense of humor and charisma. It allowed me to experiment with more colors and patterns. He’s egged me on since then, saying, ‘Let’s go louder, more vibrant’ and to steal the show everywhere we go.”

Fury has saved some of his more colorful outfits for Las Vegas, including his Creed-inspired walkout number when he fought Tom Schwarz last June.

“I always wanted to come out and do that, but I just needed an event and a good place to do it, and I thought Las Vegas was an opportunity to showcase that entrance,” Fury says. “It was really a good one for me, memorable.”

But the outfits aren’t all about patterns and material.

“A lot of it is reality through art,” says Salimian, who doesn’t work on Fury’s fight-night gear. “It’s storytelling about the amazing journey this guy has had.

“Ultimately, you can love or hate the garment, but you can’t ignore it.”

Salimian: “Batman vs. Bruce Wayne. A moment that is solidified in my mind as a turning point in the way in which Tyson and I began to approach garment design. The humor and strategy behind his Batman attire has given us much inspiration over the years, and it will arrive full circle come fight week when he unveils his garments [for the Wilder rematch].”

Salimian: “This Claudio Lugli shirt was the first we designed for Tyson upon his return to the ring, and what better way to do this than create a design which emulates the entire animal kingdom marking the return of the King of the Jungle, The Gypsy King, Tyson Fury. We wanted to make a statement: The takeover begins.”

Salimian: “Tyson’s entire suit is engulfed in smoke. Underneath his blazer is a patterned shirt, which displays some of the greatest heavyweight boxers of all time, a Mount Rushmore of heavyweights of past and present. It represents legacy, the importance of the lineal status and the notion that no one wants that smoke with Tyson or any one of the legends engraved onto his garments.”

Salimian: “Tyson is a boxing historian, someone that has studied the game and wants to etch his name into boxing history as one of the greatest of this generation. The Claudio Lugli suit he is wearing represents bare-knuckle boxers of a bygone era taken from cigarette cards from the early 19th century. Amongst these boxers is John L. Sullivan, widely recognized as the first lineal heavyweight champion.”

Fury wanted to celebrate Mexican Independence Day, which was Sept. 16, with an homage to the lucha libre wrestlers. The mask was a nod to the WWE’s Rey Mysterio.

After donning the sport jacket-with-no-shirt look during a news conference in Las Vegas, Fury paid tribute to the local fans with his attire during his walkout at the WWE event in Saudi Arabia.

Salimian: “Dripped in watercolor patterns exhibiting iconic moments of Tyson’s career thus far, this two-piece suit-and-shirt combination may be our proudest. It demonstrates the ultimate highs and the lows. From images of Tyson rising from his 12th-round knockdown [in his first fight against Wilder] to him cheering whilst gripping multiple world titles. His story is well documented, and the art we have created is a depiction of his reality. A story that will go down as the greatest comeback in sporting history.”

Salimian: “Colorful, loud, vibrant and unforgettable. It’s hard to work out whether we are talking about Tyson’s floral suit or his charisma and personality. The synergy is there and has always been there from the beginning of our relationship as his tailors.”