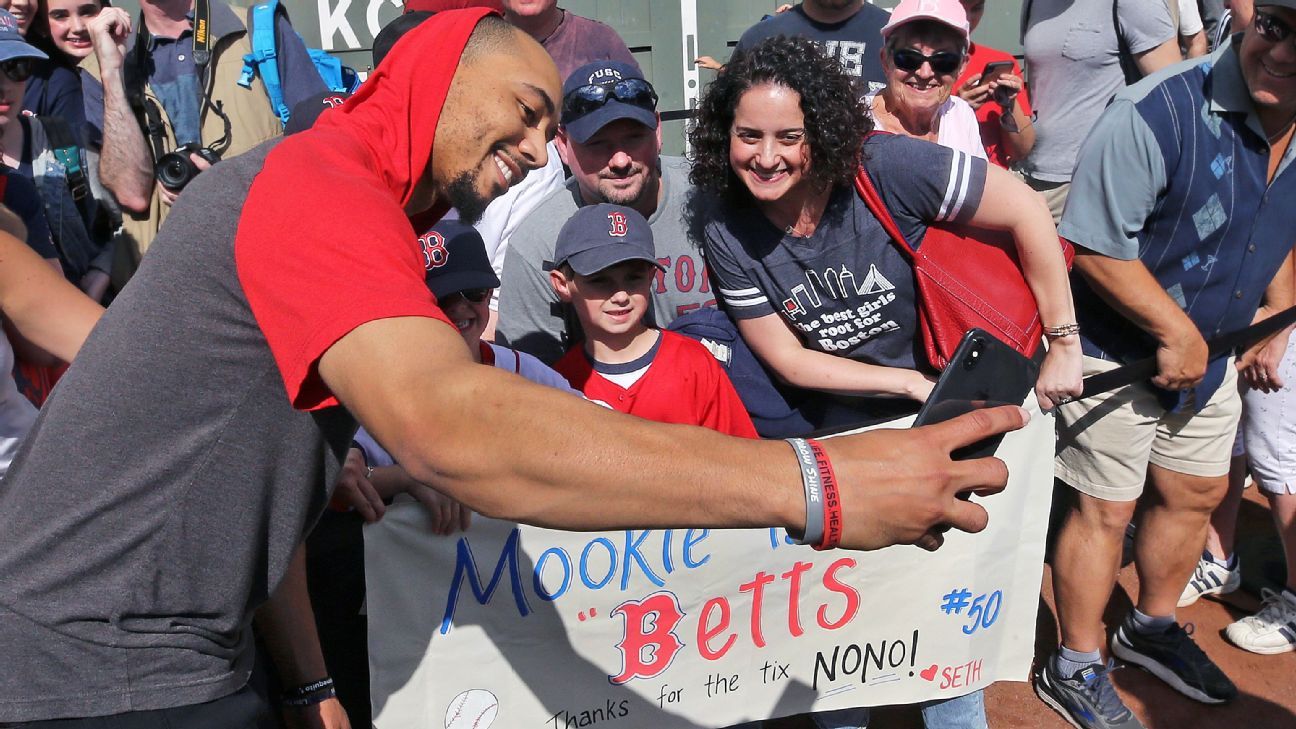 It’s no surprise that there is outrage over the Mookie Betts deal. The 2018 AL MVP and now former Red Sox right fielder was one of the most beloved athletes in the city, particularly given his rise from rookie to superstar happened nightly in front of an adoring Fenway Park crowd. Now, that superstar is headed to Hollywood to play for the Los Angeles Dodgers.

Boston’s new chief baseball officer, Chaim Bloom, said last month he expected Betts to be on the Opening Day roster. But over the past few weeks, trade negotiations heated up. With spring training right around the corner, Boston is bringing in Alex Verdugo and Brusdar Graterol — young talent the team hopes will be a big part of its future — while one of Boston’s most popular players is leaving town, along with another World Series hero in starting pitcher David Price.

Here’s why fans are angry at the Red Sox — and at Betts — and whether that anger is justified.

Why they’re angry at the Red Sox

I’ve been a Sox fan for longer than Mookie Betts has been alive, and… I’m not finding a particularly compelling reason to give John Henry any of my money anytime soon.

This offseason hasn’t been fun for Red Sox fans. The team’s two biggest free-agent signings: utility man Jose Peraza (-0.9 WAR in 2019 with Cincinnati) and starter Martin Perez (5.49 ERA over the past two seasons with Minnesota and Texas). Alex Cora, an extremely popular manager, parted ways with the organization amid the fallout of the Houston Astros‘ sign-stealing scandal, in which he played a major role while serving as that team’s bench coach in 2017. On Tuesday, Boston traded away a 27-year-old megastar a year before he hits free agency.

The team’s approach to this winter has been centered on owner John Henry’s stated desire to get under the luxury tax threshold and reset the penalties the Red Sox have paid in recent years. Henry later clarified his comments about the team’s financial intentions — getting under the luxury tax threshold, he said, was a “goal” and not a “mandate.” The initial flame ignited by Henry’s comments on the luxury tax, though, was enough to start a brush fire of speculation about Betts’ future — and raise the ire of fans. Fenway Sports Group, after all, has grown in value from $700 million to $6.6 billion, according to Forbes, since Henry purchased the Red Sox 18 years ago — an 837% increase — placing it as the third-largest sports conglomerate in the world, even ahead of the rival New York Yankees ($6.1 billion).

Betts is one of the most talented players the Red Sox have ever developed. His 42.0 WAR through his first six seasons is seventh in MLB history, trailing only Hall of Famers — or future Hall of Famers — Ted Williams, Mike Trout, Albert Pujols, Jackie Robinson, Wade Boggs and Joe DiMaggio. The three names right below Betts on the list: Mickey Mantle, Barry Bonds and Willie Mays. Teams with the financial resources of the Boston Red Sox don’t typically trade away homegrown MVPs whose career starts rank among the all-time greats.

The optics of dealing Betts — just one offseason after winning a World Series and signing starting pitchers Chris Sale and Nathan Eovaldi to huge contracts — are not ideal from a public relations standpoint for Bloom, now making his first moves in his new job.

Boston had been pessimistic about signing Betts to a long-term deal for a while. Betts’ intent to test free agency after the coming season made that difficult. But many fans believe the team never should have been in this position in the first place, noting that the reported 10-year, $300 million offer the Red Sox made him is significantly below his value on the open market.

Meanwhile, the signing of Peraza didn’t generate much excitement among Red Sox fans. You can blame the 25-year old’s .239/.285/.346 slash line last season for that. Boston’s front office, however, remains optimistic about Peraza, pointing to his 2018 numbers of .288/.326/.416. Either way, internal optimism about a bottom-of-the-roster infielder does little to mitigate the disappointment of needing to deal Betts. The decision to trade Betts serves as a true gut punch to Boston fans, capping off an unsatisfying — and at times ugly — offseason.

The logic behind much of the anger is completely valid. Regardless of the end game, the result is the same: Betts developed into a homegrown MVP talent in Boston, and despite deep financial resources and rising ticket prices, the Red Sox traded him away one year from free agency. That’s not a recipe for fan appreciation.

Why they’re angry at Mookie Betts

See ya later Mookie. Too greedy and didn’t want to play here. Thanks for taking Price with you.

THE BOSTON RED SOX OFFERED MOOKIE BETTS $300 MILLION DOLLARS, HE WANTS NORTH OF $400 MILLION. MOOKIE BETTS IS NOT AS GOOD AS MIKE TROUT SO HE SHOULD NOT BE PAID MORE THAN MIKE TROUT. IT IS A SMARTER BUSINESS MOVE TO TRADE HIM NOW & GET SOMETHING THEN TO LET HIM WALK FOR NOTHING https://t.co/KmWgPQkSoa

To be fair, a vast majority of the anger Wednesday morning was directed at team ownership. But if you ask some corners of Red Sox fandom, Betts did not enthusiastically sign an extension with the Red Sox because some fans believe he didn’t enjoy playing in Boston.

Betts is naturally introverted and wasn’t dreaming of the spotlight when he became a professional athlete. Being a sports star in Boston means you’re an A-list celebrity. While Betts wasn’t quite as much of an off-the-field public figure as some previous Red Sox stars have been, he had on multiple occasions expressed his appreciation for the team and being a part of its culture of winning.

“It’s just been a blessing to be a part of such a great franchise with all of the history and all of the guys who have come through and they still come through,” Betts told ESPN in May. “You meet a lot of people. A lot of eyes are on you here, and I’ve learned if you don’t embrace it, it may eat you up.

“You have the opportunity to win every year. Nobody is trying to take a season off. You can’t ask for anything more than that. Winning every year, winning is obviously the reason why we play and we’ve been able to do it every year. It’s definitely something I want to be a part of.”

While fans tend to favor players signing extensions before they hit free agency, as Xander Bogaerts did before the 2019 season, many of those contracts end up as team-friendly deals at premium positions. If Bogaerts had entered free agency after his 2019 season, when he hit .309/.384/.555 with 33 homers and 117 RBIs, he would undoubtedly have received more lucrative contract offers than the six-year, $120 million deal he got from the Red Sox. After all, any extra money players don’t receive still ends up in the pockets of billionaire owners.

Still, you can’t blame fans for wanting their favorite players to stay put — and homegrown players are stuck with the added burden of public pressure to take a hometown discount. Many people around Boston point to the example of Tom Brady, who took less money for years to stay with the New England Patriots, giving them payroll flexibility to improve the rest of the team in becoming one of the NFL’s greatest dynasties. Though Betts did enjoy playing in Boston, his priority wasn’t to remain with the Red Sox for life — it was, and continues to be, maximizing his value in a sport without a hard salary cap. There aren’t a ton of teams that can afford Betts’ services, but many around the industry expect that while he might not get the reported 12 years and $420 million he’s looking for, he’ll get somewhere close to it.

This might not be a situation like Jon Lester‘s in 2014, when Boston’s contract extension offer of four years and $70 million looked embarrassing compared to what the Chicago Cubs eventually gave the lefty — a six-year, $155 million deal — but it’s undeniable that Boston offered Betts below-market value — and, though fans might not like it, he wasn’t buying.

Why they shouldn’t be quite so angry

With Henry approving the contracts of Eovaldi and Sale, and J.D. Martinez opting in to his contract, the Red Sox had backed themselves into a corner. When it came to an extension, Betts wasn’t going to accept less than what he was worth on the open market, and Boston didn’t feel comfortable making the financial commitment necessary to prevent him from hitting free agency. The decision to let team president Dave Dombrowski dish out big contracts en route to winning the 2018 World Series — before firing him less than a calendar year later — proved to be extremely significant.

It’s hard to blame Bloom for following the desires of his bosses, and it’s hard to blame Betts for not accepting less than what he feels he is worth. Betts can play for another winning franchise before hitting free agency, while Bloom can start to retool his new team. Bloom begins his front-office career by trading Betts, and it will be one of the biggest moves he’ll ever be attached to.

Shedding Betts’ $27 million salary — and much of the $96 million still owed to Price — from the payroll also eases the financial pressure the team had put on itself. Yes, Henry is a billionaire — but luxury tax penalties aren’t insignificant. Combining the potential payroll commitments with the luxury tax penalties and lost revenue sharing rebates, Boston could have been looking at spending close to $100 million more over the next three seasons, in addition to facing greater draft pick and international bonus pool money penalties. Trading Betts and Price slashed approximately $43 million off Boston’s 2020 payroll, and positions the team to be able to spend heavily after the season and exceed the luxury tax threshold with significantly fewer penalties.

Subtracting the production of Betts from the lineup and the outfield, and removing Price from the rotation, makes Boston a significantly weaker team on Opening Day. Still, the deal made Tuesday means the Red Sox avoid the risk of keeping Betts on the roster for 2020 despite no guarantees for the future, while making the safest move long term, acquiring the strongest package of players they could for him. The additions of Verdugo and Graterol help supplement Boston’s young core. Verdugo — who will face intense scrutiny as Betts’ replacement — rose through the Dodgers’ system as one of their top prospects. And, for what it’s worth, Boston’s projected win total only dipped a single game at Caesars Sportsbook — from 87.5 to 86.5.

Boston traded Mookie Betts because it believes its best long-term interests included dealing one of the greatest players in franchise history, and that the team can weather the PR storm the deal has created.

Mitchell pained by groin, own play in loss at MSG
Castroneves rules out Daytona 500 next month
Rodgers, Pack at crossroads with trade possible
Art Collector rolls to Pegasus World Cup win
Ryan Reynolds has talked more Wrexham than Deadpool these days. He’s OK with that.