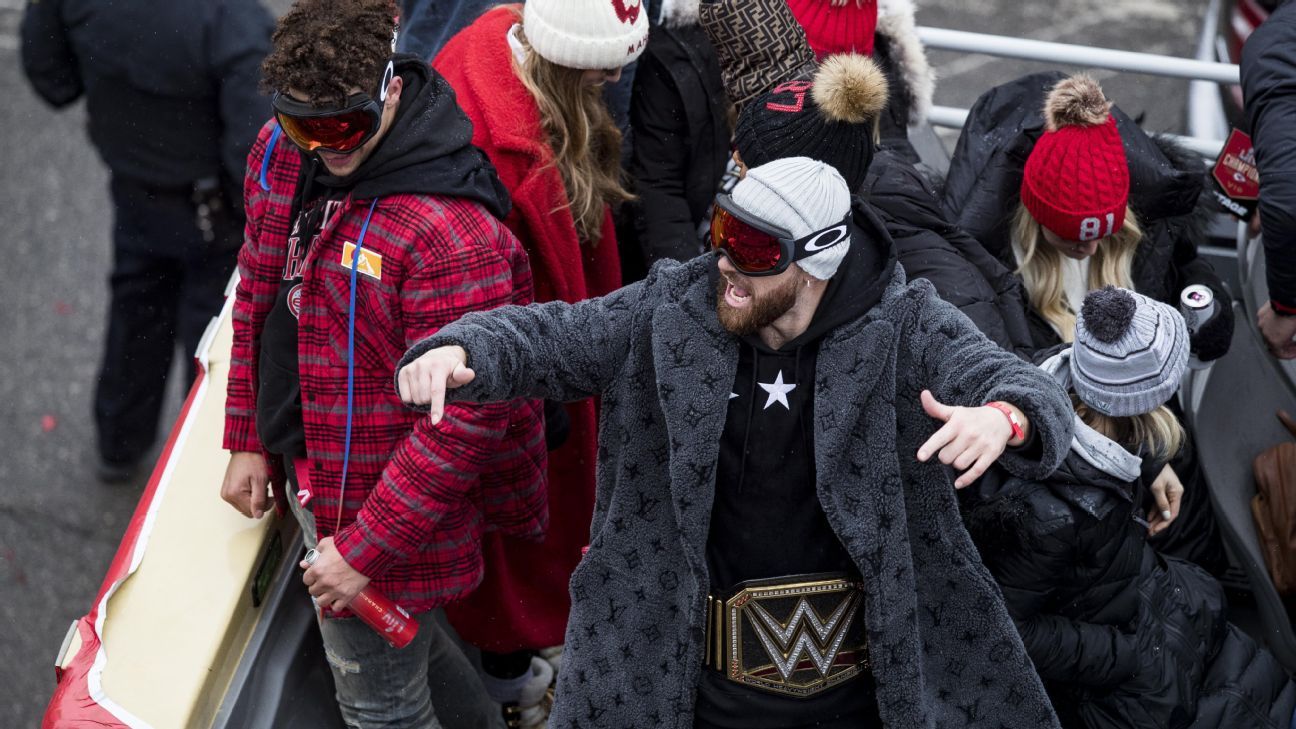 KANSAS CITY, Mo. — Temperatures in the 20s and wind chills in the teens didn’t prevent a huge turnout for the first Chiefs Super Bowl victory parade in 50 years.

“This is the most beautiful scene I’ve ever witnessed in my life,” said Chiefs tight end Travis Kelce, one of four players to speak at a rally at Kansas City’s Union Station after the two-mile parade.

Kelce was one of four players to speak at the rally. Quarterback Patrick Mahomes, safety Tyrann Mathieu and wide receiver Tyreek Hill were the others.

The emotional Kelce was the most colorful. At one point he referred to the Hunts, who own the Chiefs, as “the Clark family.” He also gave a tribute to the Chiefs head coach in a way that only Kelce could.

“How about 21 years?” Kelce said. “You all know what that means? Everybody here is thinking, ‘Oh, that’s how long I need to wait to legally get a drink.’ No. twenty-one years, that’s how long it’s been turning for my guy Andy Reid.

“And what do we do? We open a can of whoop ass on everybody … Fourth quarter (of the Super Bowl), six and whatever left on the clock, down by 10 … We got Pat Mahomes and Andy Reid, baby. How about Sammy Watkins? How about Damien Williams?”

Kelce finished his short speech by shouting, ‘You’ve got to fight for your right to party,” which sent the fans into a frenzy. Kelce also screamed it on national TV immediately after the Chiefs’ AFC Championship Game victory over the Tennessee Titans. The Beastie Boys song of the same title is now an anthem for Chiefs fans. It was heard several times along the route through downtown Kansas City in the hours before the parade.

Mahomes took the mic to chants of “MVP.” The Super Bowl MVP was hoarse from a busy few days that included the Super Bowl in Miami and a trip to Disney World in Orlando. “When I first got started in Kansas City, the first thing I wanted to do was bring the Lamar Hunt Trophy back to Kansas City, back to this organization,” Mahomes said of the trophy named for the late founder of the Chiefs. “The second, most important thing I wanted to do, was get the Lombardi Trophy for the greatest coach of all time, Andy Reid, baby.”

Chairman Clark Hunt was the first member of the organization to speak. He lifted the Lombardi Trophy in tribute to Chiefs fans. Many in the crowd weren’t even born the last time the Chiefs won the Super Bowl.

“To share this moment together with you is something I will never forget,” Hunt said.

Reid led the fans in a ‘How ’bout them Chiefs!” cheer and then made a promise about next season.

“Next year, we’re coming right back here,” he said. “One more time, baby.”

General manager Brett Veach noted the resiliency of the Chiefs, who rallied from a 24-point deficit to win their divisional round playoff game against the Houston Texans and 10-point deficits against Tennessee in the AFC title game and against the San Francisco 49ers in Super Bowl LIV.

“The most resilient people are Chiefs Kingdom, right? You waited 50 years for this and you deserve it,” he said.

The parade included not only Chiefs players, coaches and officials but some members of the Chiefs’ last Super Bowl winning team. Among them were linebackers Willie Lanier and Bobby Bell.

Lanier and Bell were among members of the last Chiefs’ Super Bowl team who didn’t get to participate in that parade. They instead were in Houston preparing for the AFL All-Star game.

Lanier said after the Chiefs beat the Titans to qualify for the Super Bowl that he was looking forward to being in this year’s parade. He said that would complete his Super Bowl experience of 50 years ago.