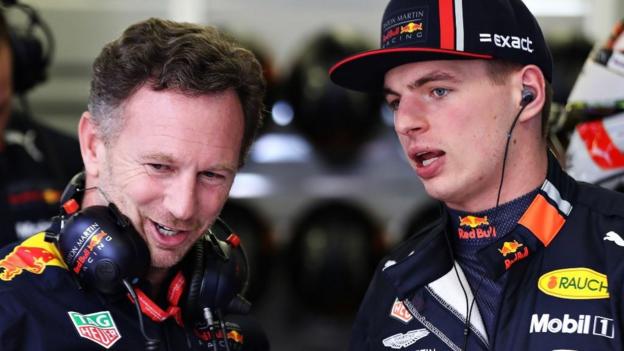 It’s a week before Red Bull’s 2020 Formula 1 car runs for the first time. Team boss Christian Horner and lead driver Max Verstappen are holding court at the drinks company’s trendy Covent Garden HQ – and you can feel the optimism.

Horner is talking about Red Bull being “as well prepared as we have ever been” since hybrid engines were introduced to F1 in 2014 and ushered in a wave of Mercedes domination.

He’s saying how “exciting” it would be if Red Bull and Verstappen, and Ferrari and their new young star Charles Leclerc could make it a three-way fight with Mercedes at the top of F1. And Verstappen is expressing his confidence that he can do the job if the car is up to it.

But there is a shadow hanging over this moment of positivity, and it comes in the shape of Lewis Hamilton, the man who has become a colossus bestriding F1 these past six seasons.

Horner admits it is “a big ask” for Red Bull to break Mercedes’ hegemony this season. Why? “Because of their track record over the last five or six years.” he says. “You have to look at it over 22 races.

“Mercedes have been immensely strong at every type of circuit. Of course, our focus has been to broaden our competitiveness across different types of venue – and they’ve been serial winners over the last five or six years, so you’re going to have to be at the top of your game to beat them.

“But sport always works in cycles and maybe – just maybe – this is the chance for a new cycle to begin.

“I am always a little more cautious in my optimism. We go into the year well prepared, with stability in regulations, with drivers, with personnel. And that has a real benefit.

“We want to be the team that really puts a charge together this year and takes the fight to Mercedes. But they very much go into the championship as the favourites.”

Red Bull on the rise, Hamilton in their sights

If anyone can do it, though, surely Red Bull can. It’s not that long ago, after all, that this team were in the position Mercedes are now, dominating F1 for four straight seasons with Sebastian Vettel at the start of the last decade.

Red Bull remain the best team in F1 in terms of operational management – pit stops, race strategy, thinking on the hoof and so on. No-one doubts the genius of their head of design, Adrian Newey. Engine partner Honda has been making impressive progress to the point that they were within spitting distance of Mercedes by the end of last year. And in Verstappen, they have arguably the best driver of the new generation.

Verstappen is a vivid, thrilling talent, a force of nature, with eight victories under his belt at the age of 22, each superb in their own way. And, importantly, someone of whom Hamilton has admitted to being wary of.

Hamilton says he gives Verstappen more room than other drivers when he’s racing him, because he’s not quite sure what the Dutchman is going to do.

Verstappen, though, while confident in his ability to beat Hamilton, says this aspect of their rivalry is all circumstantial – and that their driving might not be so very different after all.

“Well, if you looked at Brazil, we just raced hard and very cleanly,” he said, referring to his last victory of 2019, during which he passed Hamilton twice for the lead.

“From my side, I know I race hard but it is because I always want to try to get the best result out of it, and I have always done so.

“But when you fight for a title, it is a different mentality. We were not in that fight, so you know you have a few races when you can possibly win so you try everything to win that.

Horner says: “Max’s wheel-to-wheel race-craft is second to none. The only person I’ve seen Lewis make mistakes around has been Max. If you look at Mexico last year, even.

“Max is the coming man. He is 22 years of age; he is in the ascendancy. Lewis is 35. It is inevitable in any sport; there is always another generation coming. And I think F1 with Max and Leclerc and the other youngsters coming along, it is set for a really thrilling year.

“And of course Lewis has got all that experience of dealing with the big pressure moments, years worth of know-how.

“For F1, it would be phenomenal if you had a three-way fight between ourselves, Lewis, Charles, maybe even Sebastian. It would be fantastic for the sport and the fans. In the second half of the year, we saw some great races and if that continues, we look set for a really stellar year.”

A new contract signed, a weight off the team

Horner sees Leclerc as Ferrari’s most likely contender. But he warns not to dismiss Vettel, despite his past three difficult, error-prone seasons, and the fact that he was beaten by Leclerc, who was new to the team, on every metric last year.

“It would be foolish to write Sebastian off,” says Horner, who knows the German well from their time together at Red Bull. “If he gets a car to his liking, we know he is a phenomenal driver.”

In many ways, Red Bull and Ferrari are in similar positions heading into 2020. Both have Mercedes as their target, and both have very obviously committed to one driver as their future – both Verstappen and Leclerc have signed long-term contract extensions this winter.

Horner says it was good to get Verstappen’s deal – which is until 2023 – out of the way early.

“It was a great thing that Max approached the team about this subject at the end of last year,” Horner says.

“It shows the confidence he has in the team and the group of people, how comfortable he feels in the environment, that he is prepared to commit his future to Red Bull, particularly with a big regulation change coming in 2021.

“And of course from a team perspective – and also from his perspective – to remove that element of speculation that inevitably would be there.

“Every race he’d be asked: ‘Are you going to Mercedes, are you going to Ferrari, are you staying at Red Bull?’ It takes that distraction away from both him and the team, enabling us just to focus on going racing, getting the most out of the car and hopefully putting a challenge together to take on Mercedes and Ferrari this year.”

Hamilton is in a very different position, in that his contract runs out at the end of this season, and he will be facing exactly the situation Horner describes until he commits his future one way or another.

Where will Hamilton go? Horner says the “logical conclusion” is he will stay at Mercedes.

“I would think Mercedes would be very keen to keep him,” Horner says. “But it’s a question of the financials at the end of the day.

“Of course all the automotive sector has financial pressures at the moment. So when there are redundancies being made, I guess it’s difficult to justify record-breaking salaries at this time. I would assume it will be a normal commercial negotiation between the driver and his team.”

Horner admits Ferrari “could be a possibility” for Hamilton but is not persuaded by the idea that the world champion will be swayed by the romantic appeal of the Italian brand.

“Bernie [Ecclestone] would always say drivers want to end their career at Ferrari,” he says. “But I think that might be different in Lewis’s case. He has been unconventional throughout his career.

“He seems happy in the environment he’s in. If it’s the most competitive environment, why would he want to change that for the sake of driving in a different colour? So I don’t subscribe to that theory.”

Vettel, whose future is also up in the air after this season, is ruled out of a return for the same reasons.

Asked if Red Bull would have Vettel back, Horner gives a flat: “No.”

He adds: “It is difficult to see how two alphas can fit in a team. You can see the problem that Ferrari have had. Why would it be any different at Red Bull with two alpha drivers? Same with Lewis at Ferrari or Lewis at Red Bull. That is a very difficult dynamic, especially in a tight competition.”

‘If we give him the tools, he’ll get the job done’

Red Bull have two cars, with Anglo-Thai Alex Albon heading into his second season in F1 after his mid-season promotion from Toro Rosso last year, but the future is all about Verstappen. And it’s clear they are itching to give him the chance to put them back into title contention.

Horner won’t bite on the question of who is the better driver – Hamilton or Verstappen – but he repeats what he said at the beginning of last year that his man is “the most in-form driver in F1”.

“If we can give him the tools to get the job done, he’ll deliver it,” Horner says. “He’s now got five years of F1 experience. He’s had to dig deep. He’s faced external criticism when he’s made mistakes. He’s shouldered that extremely well.

“He hasn’t at any point crumbled under the pressure, and I think he now has the experience and roundedness to really put a championship campaign together.

“The likelihood is that Max is the one most likely to have a go at [Hamilton] and that’s inevitable. There is always another wave coming.

“Look at the [Australian Open] tennis – [Novak] Djokovic ultimately prevailed, but the young Austrian lad [Dominic Thiem], he had him on the ropes at times. That inevitably will happen [in F1].”

Hurricane Ian forcing EWU-Florida to Sunday
How our new NFL stats can better rate pass-catchers
How the Guardians turned the AL Central race into a one-team sprint
Zion feeling ‘great’; excitement ‘through the roof’
UFC fall storylines: Can Charles Oliveira keep the streak going? Will we see Jon Jones again?