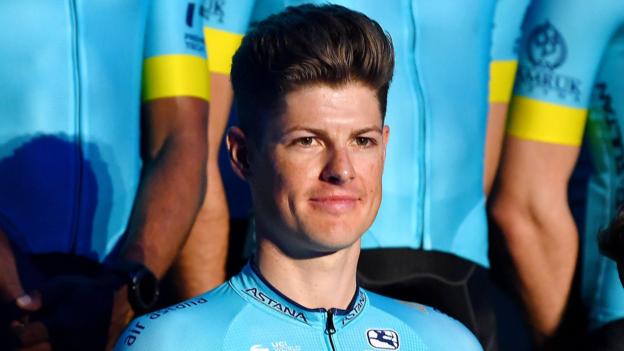 The CADF said it will investigate how the confidential report became public.

“After careful review of the elements available, the CADF has not submitted the report to the International Cycling Union for the initiation of disciplinary proceedings against the individuals or team in question.”

Ferrari was banned for life in 2012 by the US Anti-Doping Agency for his part in the Armstrong doping scandal and any rider caught working with a banned doctor could face a two-year suspension.

The CADF said it shared Sportradar’s report “in strict confidentiality in a secured manner with a selection of relevant anti-doping bodies and law enforcement agencies”, adding that it did not disclose the findings to “any other third party”.

“The CADF deeply regrets that the report was leaked, and an inquiry is being conducted to understand how the file was made public and prevent this from happening again,” the body added.

Denmark’s Fuglsang, 34, had the most successful year of his career in 2019, winning one-day ‘monument’ classic Liege-Bastogne-Liege, prestigious stage race the Criterium du Dauphine and a stage of the Vuelta a Espana.

Politiken, DR and VG said that as well as seeing the report, they had spoken to 12 people involved in cycling who alleged Fuglsang had been working with Ferrari, including claims the rider was seen interval training behind a scooter with Ferrari near Monaco.

The report also contained the claim that Fuglsang and Kazakhstan national champion Lutsenko met Ferrari in either Nice or Monaco and that the banned Italian medic was present with Astana at the 2019 Volta a Catalunya.

Fuglsang said he had “no case to answer” and was “extremely concerned that such rumours could be spread out in the press”, while Lutsenko issued an identical statement denying having met Ferrari.

Astana said the team “does not collaborate with any suspicious doctor, such as Dr Michele Ferrari” and that riders are “not authorised to consult any doctors external to the team”.

Ferrari previously worked with Astana manager Alexandre Vinokourov, who served a two-year ban for blood doping during his racing career from 2007 to 2009.

In response to the allegations, Ferrari said he had not had “any relationships” with Astana riders for “over 10 years”. He denied having been to Monaco or Nice “for at least 12 years” and said he did not attend the 2019 Volta a Catalunya.