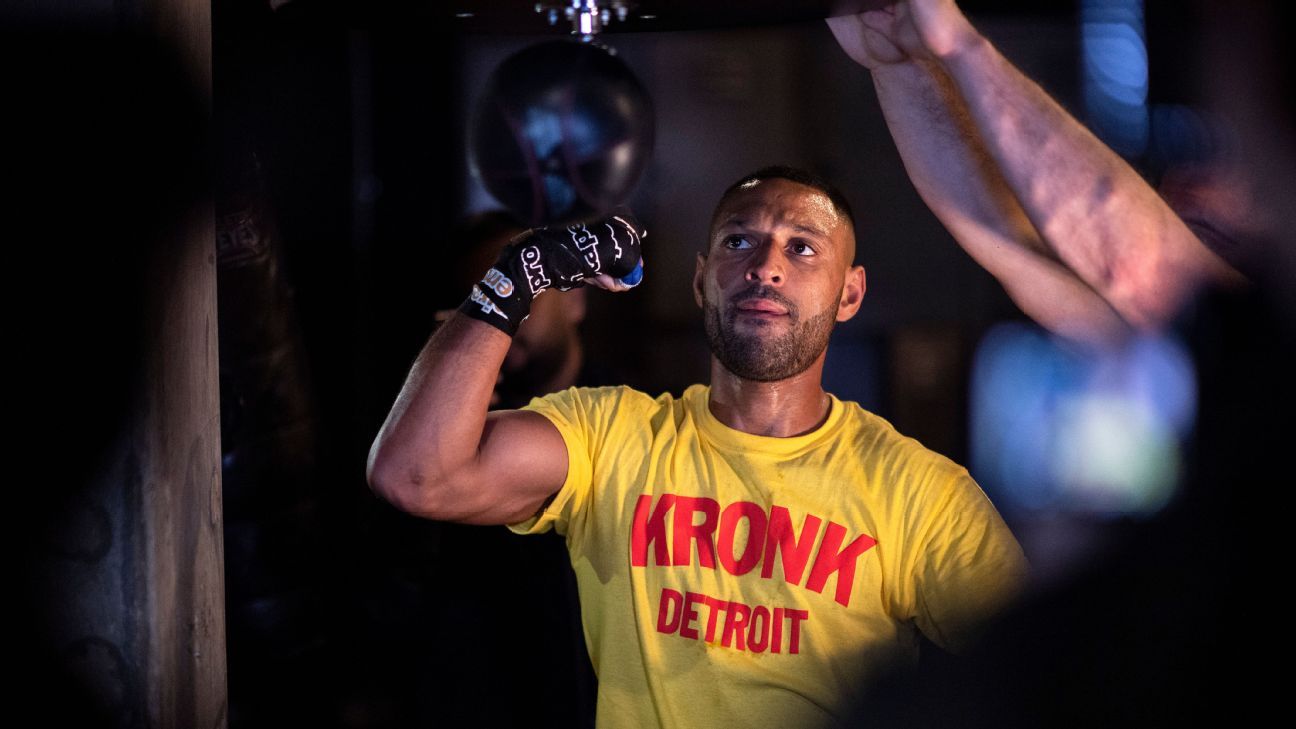 After a difficult few years, Kell Brook is feeling revived and is targeting a rematch with WBC-IBF world welterweight champion Errol Spence Jr. if Brook beats Mark DeLuca on Saturday.

Former IBF titleholder Brook has not fought since a points win over Australia’s Michael Zerafa in a junior middleweight bout in December 2018.

Brook (38-2, 26 KOs), 33, says he faces retirement if he cannot win convincingly against DeLuca, of Boston, in front of his home city fans at the Sheffield Arena.

Brook, who made three defenses of the IBF world welterweight title from 2014 to 2017, was defeated by Gennadiy Golovkin and Spence in 2016 and 2017 respectively. He suffered broken eye sockets in both fights and required counseling for depression.

“I felt a bit down and disappointed. So I spent a bit of time with the family last year, traveled a bit,” Brook told ESPN.

“I got a bit down, depressed and fat, but I needed to be out of the game to realise I need boxing. I have got a lot more to give, my mojo is back and I’ve been thinking I can beat these top guys.

“I was supposed to be on the Anthony Joshua-Andy Ruiz Jr. undercard in December and that fell through, but I stayed in the gym over Christmas and it has put me in good stead. I was ready for this fight weeks ago and I’ve got a lot of positive energy about me.

“I believe I’m smarter now and I’m looking after myself better now. I know I’m going to give a lot better performance. You are going to see something special on Feb. 8. I’m very sharp and feeling like I’m in my prime again.”

Spence (26-0, 21 KOs), 29, knocked out Brook in the 11th round and the American has since made four title defences. But after edging a split decision over Shawn Porter in September, which also earned him the WBC belt, Spence crashed his car and faces a misdemeanor charge of driving while intoxicated.

Brook has prioritised a fight against Spence, who plans to fight again in May or June, over his English rival Amir Khan, who he has wanted to face since 2016.

“If I lose to DeLuca I will announce my retirement in the ring after,” Brook said.

“I was beating Spence and then my body gave up. I broke my eye socket for the second fight in a row. I would love the rematch with Spence. I know he had a car crash but he said he wants to fight again this year and he wants to be back in the big fights.

“If Spence fought me again the boxing world would really get to know who is the better fighter.

Spence said he has regrets about the fights against Golovkin and Spence: “I wish I could take it back because I would still be unbeaten. Putting on the extra muscle and weight to fight Golovkin, getting my eye broke, then ballooning in weight, then having to drag myself back to 147 limit, then getting ill and a chest infection because my immune system was low. But at the time, it was an opportunity.

“Who knows how long I have got left. I could be like Bernard Hopkins.”

Brook also revealed there were talks last year for him to face WBO champion Terence Crawford (36-0, 27 KOs), 32, of Nebraska, who made his third welterweight title defense by knocking out Egidijus Kavaliauskas in the ninth round on Dec. 14.

“I was disappointed not to fight last year but it wasn’t for not trying, and I wanted the Crawford or Khan fights,” Brook said.

“But I think that [US broadcaster] Showtime thought it would do better numbers. After Khan went off in his last fight they didn’t want to pay out a lot of money for that fight [Brook vs. Khan] because he was a flop.

“I was frustrated. Nothing came of the big names, Crawford went another direction. It got close to Crawford last year. We were talking about it but it never happened. Crawford is now No. 1 in the division in my opinion.