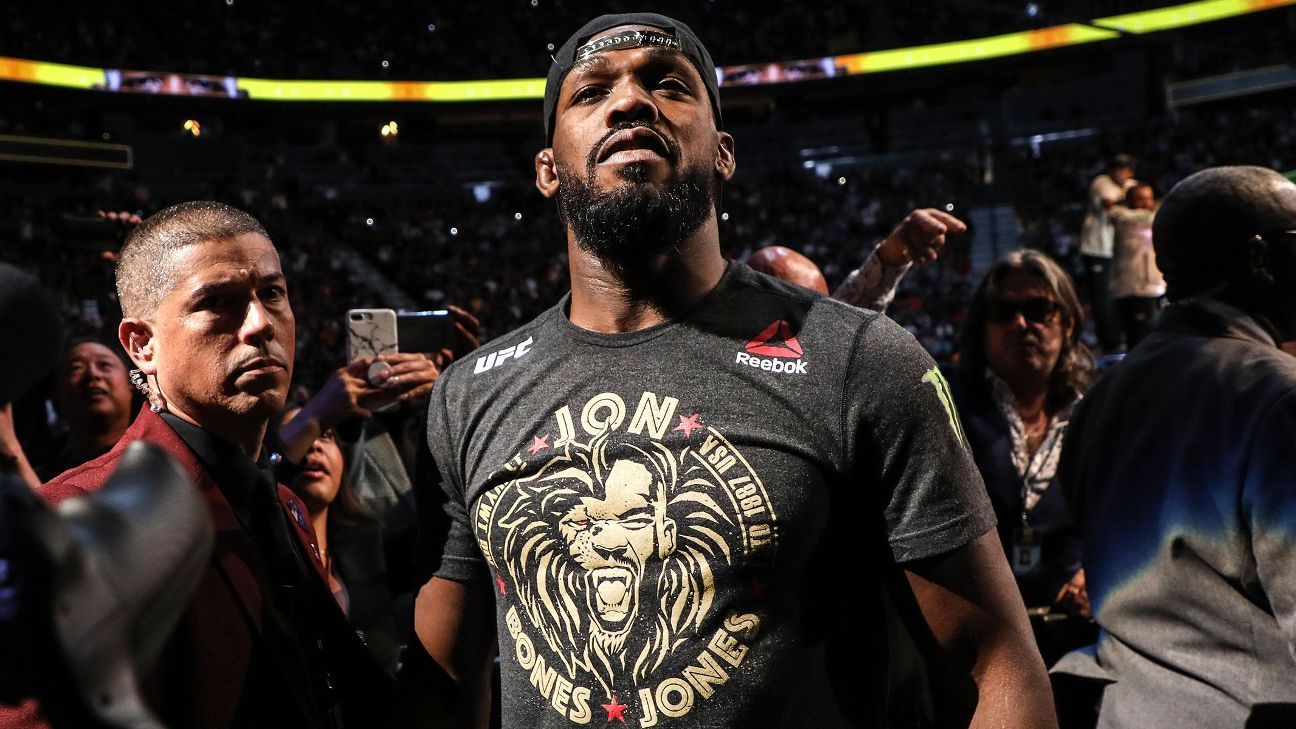 Jon Jones was 20 years old and just seconds into his professional MMA career. He was locked inside a cage with an unsuspecting soul named Brad Bernard. They were clinched against the fence, pressed chest to chest, when Jones suddenly took his opponent airborne with a dazzling suplex throw. As Bernard went flying through the air, there was a collective gasp from the crowd in the Holiday Inn banquet room in Boxborough, Massachusetts.

That was in April 2008 in a regional promotion called Full Force. Within four short months, Jones would be 6-0 and making his UFC debut. Trading in a banquet hall for a 15,000-seat arena, Jones was fighting on the undercard of a Georges St-Pierre title defense, with Brock Lesnar in the co-main event.

Jones immediately made it known that the big show was not too much, too soon. In his very first round inside the Octagon, he wowed fans at the Target Center in Minneapolis by sending this opponent flying too, with another of his emphatic Greco-Roman takedowns.

The step up in competition, paradoxically, enabled Jones to shine more brilliantly than ever. That’s because Andre Gusmao, the unbeaten Renzo Gracie protégé he faced in his debut at UFC 87, was skilled enough to survive for the entirety of their scheduled three rounds. All that did was give Jones more airtime to perform, to dominate, to create.

Jones let it all fly that night — and he continued to do so as he ascended the ranks, ultimately becoming the youngest champion in UFC history at age 23. Even during a murderers’ row stretch in which he fought five consecutive champions or ex-champs — Mauricio “Shogun” Rua, Quinton “Rampage”Jackson, Lyoto Machida, Rashad Evans and Vitor Belfort — Jones continued to operate with wild abandon. He finished four of those five, going the distance with only Evans in a clear, one-sided decision win. As a mixed martial artist during the early part of his career, Jon “Bones” Jones was a virtuoso at the artistry, a dominant fighter with not just a skill set but also a spirited flair that commanded the sport’s attention.

When Jones (25-1, 1 NC) makes his 11th defense of the light heavyweight belt on Saturday night, facing Dominick Reyes (12-0) in the main event of UFC 247 at the Toyota Center in Houston, we might see some of those same creative moves or even fresh new ones. But these days, the free-form artwork reveals itself in smaller strokes. “Bones” uses his length to stay out of his opponents’ range, as he always has, but rather than setting up an advancing attack, he often seems content to chip away with kicks from distance.

Jones won both of his fights in 2019 by decision, showing only flashes of his old ingenuity. Make no mistake, he is defeating everyone put in front of him, but wild abandon appears to have given way to buttoned-down efficiency. This isn’t the same Jon Jones.

“He’s still super creative, but now it’s more subtle,” insists Greg Jackson, who has been training Jones in his Albuquerque, New Mexico, gym for over a decade. “As he’s changed and grown and evolved, some things he used to do he’s left behind. He might pick them back up, but you’re not going to see the same fight more than once from him.”

Back in 2009, when Jones first walked into Jackson Wink MMA Academy, Evans was the team’s established star at light heavyweight, having only recently been dethroned as UFC champion. And while a shifting power dynamic at the top of the 205-pound division eventually put the two fighters at odds, “Suga Rashad” initially embraced the arrival of new blood. Evans was comfortable in the role of mentor, and he recognized that working with this imaginative young fighter would bring an infusion of new ideas into his own career.

“I remember when he first came to Jackson’s and I watched him work out,” Evans said, “I was like, man, now I’ve got somebody I can play with.”

Soon the two were going at it in the gym for an hour at a time. Jones would show off a creative technique, with Evans trying to copy it. Then Evans would make up something and see if Jones could pull it off.

“We’d go back and forth,” Evans recalled, “drilling and having fun.”

Like many who have watched Jones’ performances through the years, Evans has noticed an increasingly conservative approach. He believes it is an inevitable byproduct of Jones’ long tenure at the top of the game. Jones is no longer the undaunted young lion storming every obstacle in his path, fighting as though he were invincible. Back when he was still on the rise, he had not yet had adversity stare him in the face.

“You don’t know what you don’t know,” Evans said. “You see other people get knocked out and you’re like, ‘Nah, I’ve never been rocked, never been hurt.’ You don’t think it can happen to you. But years go by, and you go through difficulties that make you see things differently.”

The difficulties Evans is referring to are not the troubles outside the cage that have stalled Jones’ career on too many occasions. Evans is instead talking about the accumulation of close calls inside the Octagon. Belfort locking in an armbar in 2012. Evans himself landing a big head kick that same year. Alexander Gustafsson pushing Jones to the limit in 2013. Daniel Cormier putting Jones through two no-backing-down battles. During his most recent title defense in July, Jones was taken to a split decision by Thiago Santos.

Pointing out a few dangerous moments scattered through a long career might seem like preposterous nitpicking. Jones smashed Belfort and Evans. Jones rallied with gusto to win the Gustafsson fight and finished him when they met again. He beat up Cormier both times they fought. But Evans’ point is that even before the split decision with Santos, Jones had faced down hazards that had had a cumulative effect.

“In practically every one of Jon’s wins, there was a moment where he could have lost,” Evans said. “Whenever that happens, you have to overcome a part of yourself that tightens up just to survive. I think that makes you a bit more calculated in your approach.”

Greg Jackson acknowledges the increasingly calculated approach. He is the one leading the planning sessions that dictate Jones’ strategy, after all. But to Jackson, what has driven Jones’ evolution is slightly different from what Evans describes. It isn’t so much about what Jones has seen during his career, the coach said, but what his opponents and their coaches have seen.

“There are a lot of great teams out there that study a lot of tape on Jon, and they have 10 years of data on him,” Jackson said. “So it’s much harder for him to just be Jon now than it was when he was a phenom kid coming up.”

But wouldn’t the need to evolve apply to any fighter who has been around for a decade? And how susceptible is Jones to having the sport catch up to him, really, considering how far ahead of the pack he started out? When Jones was riffing like a jazz master, fully in the moment and unconstrained by conventional technique, it didn’t matter if you thought you knew what was coming. His inventive attacks and 747-like wingspan were going to get to you.

It would be inaccurate to say no one can stop Jon Jones, though, because it has been proved again and again that one man can: Jon Jones. He is the only champion in UFC history who has been stripped of a belt on multiple occasions. Three times he has been suspended, for drug-test failures and other misbehavior. These career fits and starts have slowed the roll of a fighter many view as the greatest of all time. In recent years, Jones has seemingly always been coming back or starting over. That’s going to break the rhythm of a guy who has done his best work while in a flow state.

Jones also has lost momentum by being sidelined during the emergence of a new era in the sport. No longer is it every fighter’s ultimate goal to wrap a shiny, gold-and-leather belt around his or her waist. Nowadays, the spotlight is on money fights, with audacious postfight callouts taking center stage even over the actual fights. Yet while stars such as Conor McGregor, Nate Diaz and Jorge Masvidal have been cashing in, Jones — the consensus pound-for-pound No. 1 and GOAT — just keeps plodding forward, dutifully taking on the next man up.

Is “Bones” bored with the light heavyweight division? Other than Cormier, Jones’ recent challengers — and those lined up ahead — are not so high-profile. Where once upon a time Jones was mowing down a succession of champions, his most recent conquests have been Anthony Smith and Santos, with Reyes now ready to take his shot and Jan Blachowicz and Corey Anderson waiting in the wings. That is a significant drop in opponent Q rating.

“Yeah, but the guys in front of Jon now are more complete fighters than ever,” Greg Jackson said. “They’re up-and-coming, powerful; they can do it all.”

Reyes subscribes to that way of thinking.

“The game’s changed,” Reyes said during an appearance on Ariel Helwani’s MMA Show on Monday. “We’re getting better. The competition’s getting better.”

Jones has had a harder time finishing fights, Reyes said, because “he’s getting guys that actually move now.”

Jackson rejects the notion that recent fights have proved more difficult because Jones’ motivation is lagging.

“His motivation is he likes to compete and he likes to win — a lot,” the coach said. “That has not changed.”

As Jones put it in an interview with ESPN that aired this week: “I’m winning consistently, and I’m not going to be incredibly impressive every time. … I know how hard it is to do what I do.” He acknowledged having heard criticism for his recent performances but is undeterred, saying, “You’re not going to sink every 3-pointer.”

That might be the reality, but the greats tend to believe every shot from downtown is going to be nothing but net. Or that every title defense is destined for a dominant finish.

That Jones would settle for anything less — “Finishes are always nice,” he said during his ESPN interview, “but a victory is just as good with me” — speaks to a concern voiced by Evans as his old training partner enters Saturday’s title fight. The challenger, Evans points out, is at a point in his career where Jones used to be: undefeated and fearless.

“For Dominick Reyes, the best chance he has to beat Jon Jones is by fighting from that place of looseness, almost recklessness to an extent,” Evans said. “That’s a place where Jon might not feel comfortable fighting anymore. He might shut down Reyes, sure. But fighting conservatively against a guy with no fear, you hesitate, and your opponent just goes for it. That’s a dangerous game.”