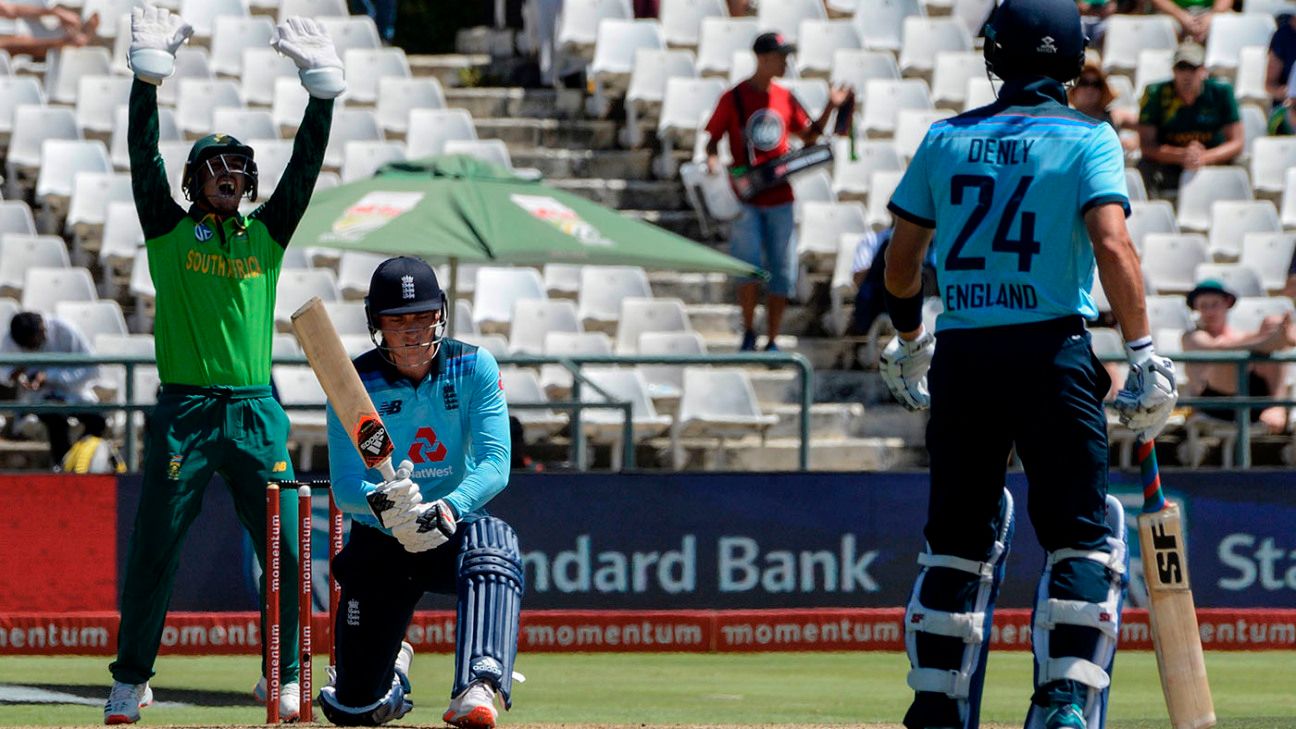 Eoin Morgan admitted that England’s 50-over players were “way off the mark” in their first ODI outing since the World Cup final in July, but said that he expected the new members of the team to learn a huge amount from their failure at Newlands, after Quinton de Kock and Temba Bavuma capitalised on a sub-par batting performance to secure a comprehensive seven-wicket win.

South Africa’s win was eventually sealed with 14 balls to spare after de Kock’s and Bavuma’s 173-run stand for the second wicket had broken the back of a 259-run chase. But their victory had been set up by an impressive performance in the first half of England’s innings, as they reduced the visitors to 131 for 6 before Joe Denly’s 87 helped post a serviceable total.

“We were way off the mark, and we were hurt,” Morgan admitted at the post-match presentations. “South Africa completely outplayed us today in all departments. We’ve got no excuses. We didn’t adapt to the conditions today that were set in front of us, [because] we knew it wasn’t going to be an absolute run-fest.

“But every batsman, apart from suppose Joe Denly and Chris Woakes really struggled to get going, which probably emphasises that we are a little bit rusty. But South Africa bowled well and accurately, they used the conditions really well with slower balls, and then we couldn’t penetrate the partnership between de Kock and Bavuma, so it made things very difficult for us. But full credit to them, they’ve started the series very well.”

Asked whether England had misjudged a Newlands pitch that proved to be slow and awkward for fluent strokeplay, Morgan felt their failings had been more subtle than that, after a typically forthright fifty stand between Jason Roy and Jonny Bairstow had given way to a mid-innings collapse of 6 for 80 in 18.3 overs.

“I think we lacked adaptation to the skill level that was needed,” Morgan said. “The guys up front came hard like they normally do, as we always try and do, but when that didn’t come off we had to try and rein in in a little bit.

“I think we lost wickets in clusters, and when myself and Joe [Root] went at the same time, we continue to lose wickets until the Woakes and Denly partnership. But I suppose that total would only get us in the game if we if we bowled well and managed to take early wickets. but having let those guys get themselves in, it was a struggle to drag things back.”

Nevertheless, having blooded two new ODI debutants in Tom Banton and Matt Parkinson, as well as handing a 50-over recall to Chris Jordan after a three-and-a-half year absence, Morgan conceded that his side was never likely to be the well-honed outfit that held its nerve in adversity to win the World Cup last summer.

“I think they learned a huge amount,” said Morgan. “Failure is a huge platform to try and catapult yourself forward, and learn from your mistakes. As soon as you can, [you have to] implement them into this series.

“I think the two guys making their debuts. Tom Banton and Matt Parkinson, have come in today and seen what international cricket is like,” he added. “They’ve had a little glimpse of T20 international cricket but it’s not all crash, bang, wallop, like we’ve seen today. So they learn a lot from tonight and hopefully take that into the rest of the series.”

Despite the relative lack of jeopardy in this contest, Morgan insisted that the pain of losing was every bit as relevant to him and his team, given they are still the No.1-ranked ODI side in the world, with a proud recent record in their 50-over campaigns.

“I think we need to continue to learn like we have done in the past,” he said. “You know you need to learn and identify exactly where you’ve got wrong, and I think ultimately today, we were outplayed because we were off the mark.”