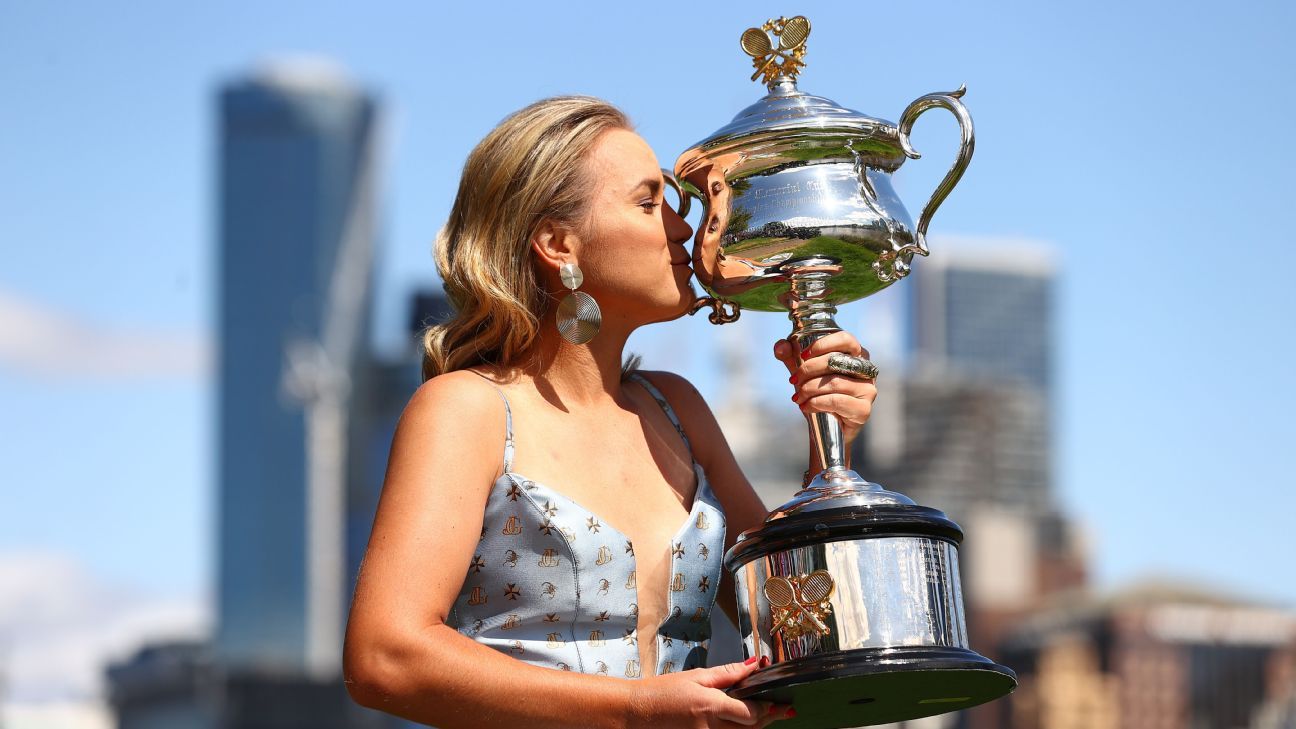 The new decade in Grand Slam tennis began ominously, amid anxiety caused by the bushfires raging throughout Australia. Thanks to some much welcome rain and cool weather, the Australian Open quickly morphed into one of the most competitive, fascinating tournaments in recent memory.

The women’s event was dominated by fresh, if not exactly unknown, faces, with a winner — Sofia Kenin — who started the tournament as a 35-1 long shot. The men’s event produced 28 five-set matches, just two short of the tournament record, before Novak Djokovic laid claim to his eighth Australian — and 17th major — title.

Here are some of the major takeaways from this satisfying, kaleidoscopic event.

Djokovic was 0-7 in major finals in which he trailed 2-1, as he did in this tournament, before mounting a ferocious comeback against Dominic Thiem. Last the fall, Djokovic let the top ranking, including the prized year-end No. 1 honors, slip through his fingers and into the clutch of Rafael Nadal. It left a big question mark looming: Was Djokovic drifting into one of those occasional fallow periods he’s experienced?

Not hardly. Djokovic is on a 16-match winning streak dating back to mid-November, and those puzzling, back-to-back losses to Thiem and Roger Federer in the round-robin portion of the ATP World Tour Championships. His revival has cast a stronger spotlight on his three-way race with Federer and Nadal to finish his career as the all-time Grand Slam singles champ and, possibly, acknowledgement as the sport’s greatest of all time.

Federer, the leader with 20 major titles, has struggled in his last two majors and hasn’t won a Slam title since the 2018 Australian Open. Nadal (19 majors) is likely to be the odds-on favorite to equal Federer’s record at the French Open (Nadal has won that one a dozen times). Djokovic trails Federer by three titles, but he’s the youngest member of the trinity at 32, is in perfect health and has the most versatile game. It will be hard for anyone to look away from this race until it’s settled.

A new normal in the WTA

The theory that the WTA lacks great players who are capable of dominating is being put to rest by the sense that more and more young pros with dazzling skills and talent are challenging and breaking up the old order.

Tick off the names: Serena Williams, Petra Kvitova, Karolina Pliskova, Simona Halep, Angelique Kerber, Sloane Stephens, Caroline Wozniacki. All of them are former Grand Slam champions, No. 1-ranked players or both. With the exception of Stephens and Wozniacki (who retired following her third-round loss), all of them were prime contenders for the title Down Under.

Halep justified her No. 4 seeding. The other familiars fell short, as did a pair of young players, defending champion Naomi Osaka and Madison Keys. Resurgent, unseeded Garbine Muguruza struck a blow for veterans by reaching the final, but the sizzle in the tournament was created by relative newcomers in 21-year old Sofia Kenin, Ashleigh Barty (23), and 15-year old Coco Gauff.

Take those three women and add Bianca Andreescu, the 19-year old Canadian sensation (and US Open champion) who sat this tournament out with a knee injury, and you have a quartet that could utterly transform the face of women’s tennis in the new decade.

Is there a more undervalued player out there than the 23-year old Austrian, now a three-time Grand Slam runner-up? Thiem defeated three top-10 players in Melbourne, including No. 1 Nadal, and forced Djokovic to five sets in the final for the first time since Nadal did it in their historic 2012 clash.

Thiem’s head-to-head numbers are impressive. He’s beaten Federer five times in seven matches. He’s 5-9 against the “King of Clay” Nadal, who has beaten him in two French Open finals. But Thiem is 2-1 in their last three. Thiem also won four of his 11 matches with Djokovic, including two of the last three. Among the latter: Thiem’s win in the French Open semifinals.

Due to his age, Thiem missed out on all the Next Gen hype and hoopla. But if you’re looking for the next under-30 champion, nobody — not Daniil Medvedev, nor Alexander Zverev, nor Stefanos Tsitsipas — has comparably convincing credentials.

Although the No. 14 seed was relatively unknown right up until the late stages of this tournament, a savvy fan could see her breakthrough coming from a long way distant.

After lifting the trophy, Sofia Kenin describes the Australian Open as the best two weeks of her life.

Last year, Kenin demonstrated that she had the composure of a natural-born champion during her third-round upset of Serena Williams at the last French Open. Just two months later, on the US hard-court circuit, she had wins over the No. 1-ranked player in successive events in Toronto and Cincinnati (Barty and Osaka, respectively). Nobody had accomplished that feat since Lindsay Davenport, back in 2001. Kenin’s 38 hardcourt wins in 2019 left her tied with Barty for tour-best on the year.

Beyond the stats, Kenin’s zeal for competition is remarkable. She steps up under pressure, her determination quashing any budding anxiety. She loves the fight and shows it in her body language. She has a flair for drama without being a drama queen. Kenin also may be the person least surprised by her success. “I see that things are happening for me,” Kenin told reporters after she won. “Everything is just falling into place.”

The number of quality players from Russia, or who are the offspring of Russian immigrants, is large and growing. The tradition goes back to Svetlana Kuznetsova, Maria Sharapova, Marat Safin and his kid sister Dinara Safina.

Kenin was born in the U.S. and embraces her American identity, as does the other startling young talent, Amanda Anisimova. Both of them have Russian parents. They immigrated to the U.S. hoping to provide their children with exactly the kind of opportunity they have seized.

There are a dozen Russian women ranked in the WTA’s top 120 (second only to the US, which has 18), which doesn’t include Russian-born players who left for Kazakhstan (a group that includes 20-year old prospect Elena Rybakina, ranked No. 26).

On the men’s side, Russia has recently contributed three of the most promising young players ranked near the top of the game: No. 5 Daniil Mededev, No. 15 Andrey Rublev and No. 17 Karen Khachanov, all three alumni of the Next Gen campaign. Two other Top-100 players are Russian-born but represent Kazakhstan, No. 54 Alexander Bublik and No. 68 Mikhail Kukushkin.

Serena is up against it

It seemed like the stars and planets finally were properly aligned for the woman hoping to equal Margaret Court’s Grand Slam singles title record of 24. Serena was healthy. She entered the tournament with adequate seasoning, winning in Auckland for her first title since the 2017 Australian Open. That seemed a hex-breaking victory, the first championship she claimed after losing five in a row.

Williams has a Djokovician record in Melbourne, having won the event on seven previous occasions on the hard courts so friendly to her big game. But once again she faltered, this time in the third round, beaten unexpectedly by a woman she had humiliated at the last US Open, 6-1, 6-0 in 45 minutes, Qiang Wang.

“It’s not even about the Slams, it’s about just me playing good tennis, and I didn’t do that today,” Williams told reporters afterward. “That is more disappointing. … I’m better than that. That is what it is for me today.”

If it wasn’t clear to everyone before, it is now. The chase to catch Court has become an enormous burden that creates pressure. She has her work cut out, with her least productive major, the French Open, coming up next.

Pundits and fans have been hoping that the mercurial Australian showman, 24-years old and ranked No. 20, will cease becoming embroiled in controversies and iron out the temperamental and technical kinks that have kept him from fully realizing his talent. He has never been beyond the quarterfinals at a major, yet talent is so conspicuous — and his antics sometimes so outrageous — that he already attracts fans like a superstar.

Wearing a Lakers jersey in the news conference, Nick Kyrgios opens up on how the Kobe Bryant tragedy has affected him.

Before the event began, Kyrgios took the point on the bushfire relief effort, setting off a chain of events that ultimately netted the charity many millions (an actual tally hasn’t been made). That included the $4.8 million ($3.2 million USD) pot raised at an exhibition staged in Rod Laver Arena before the start of main draw play. Kyrgios constantly used his bully pulpit to draw attention to the crisis and solicit further aid.

Although Kyrgios has been famously embroiled a feud with Nadal, their fourth-round match, won in four thrilling sets by Nadal, transpired without significant incident or controversy.

“I think when he (Kyrgios) is playing like today, with this positive attitude, he gives a lot of positive things to our sport,” Nadal said afterward. “So I encourage him to keep working like this because he is one of the highest talents we have on our tour. I like the Nick Kyrgios during this whole tournament.”

Asked about Nadal’s comments in his post-match press conference, Kyrgios said, “I mean, I appreciate it. … I feel like I’ve made progress as a human. A tennis player, I don’t really care about as much.”

The WTA made a bombshell announcement mid-tournament, revealing that starting at the Dubai Open in February, the tour will embark on a “new trial [that] will allow coaches to coach their player in the form they are currently coaching from the box without getting penalized.”

The declaration sent shock waves through the sport, not least because it’s somewhat vague. Just where will the WTA draw the line on what is — or isn’t — considered appropriately low-key coaching? (What coaching takes place now is subtle.)

The ATP continues to prohibit in-match coaching. The new, relaxed rule will not apply at Grand Slam events, which operate by a similar but not identical rule book. That’s ironic, because the push to allow coaching goes back to the now notorious, unfortunate incident that took place in the 2018 US Open final between Serena Williams and Naomi Osaka.

Coco Gauff discusses the impact of the Australian Open crowd following her elimination from the tournament.

Coco Gauff has improved — a lot

The teen sensation had another excellent major. She was given a disconcerting draw that paired her with Venus Williams in the first round for the second time in the past three majors. She won again, then survived a bruising battle with Sorana Cirstea before she avenged a painful US Open loss to Naomi Osaka. By the time Gauff got to Kenin, her physical and emotional tanks were running close to empty. She put up a game fight but faded and lost the third set to Kenin without winning a game.

More important than those stats, Gauff had more pop on her serve at this tournament. Until she hit the wall, her forehand looked more reliable and the backhand appeared even more dangerous than before. She will only get stronger. This was another step in the right direction for Gauff.