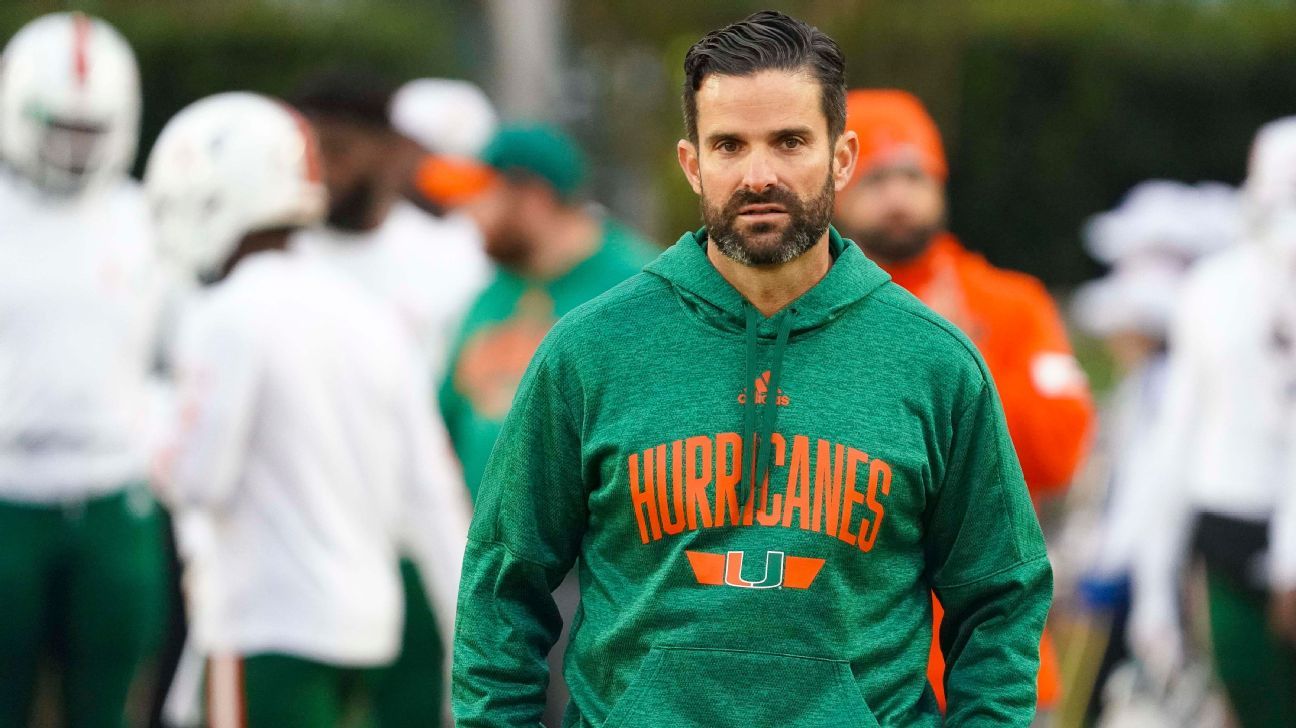 CORAL GABLES, Fla. — For Miami Hurricanes coach Manny Diaz, the end of 2019 was a disaster. So far, 2020 has gone much more to his liking.

His list of offseason accomplishments include landing a new big-name offensive coordinator in Rhett Lashlee, bringing Pro Football Hall of Famer Ed Reed back to his alma mater to join the staff and hitting the transfer portal to secure quarterback D’Eriq King, defensive end Quincy Roche and kicker Jose Borregales — all standouts at positions of need for Miami.

That’s why, in an interview with The Associated Press on Monday, Diaz insisted the Hurricanes are already ahead of where they were when their mess of a 6-7 season ended in December.

“Coming out of that, maybe that did give us the impetus to really force introspection and to make some decisions that in my mind have made us a much, much better outfit right now,” Diaz said. “Now again, that’s just words, and we have to go prove it and we’re a long way away from that. But I am very optimistic that we’re a much better program than we were.”

The Hurricanes have a few more signings to complete Wednesday, a few more names to add to the 18 players who joined the team in December. Reed officially was signed as the program’s new chief of staff last week, and the Hurricanes are looking to complete the hiring of Rob Likens, the former offensive coordinator at Arizona State, as their new receivers coach this week.

Likens’ hire will be the latest step in an overhaul of the offensive staff, a series of moves that started with the firing of offensive coordinator Dan Enos shortly after Miami’s 14-0 loss to Louisiana Tech in the Independence Bowl. Miami was the only team to be shut out in a bowl this past season and finished the season 90th in scoring and 98th in total offense out of 130 teams at the FBS level.

“We’re solving our issues,” Diaz said. “I think that’s what the month of December was about in terms of really taking an analytical look at our past season and where we were deficient, where we had to improve. And then start taking steps to try to make those things happen. There were some issues, and I’m responsible for all of them. And therefore to me, it was my responsibility to get them all fixed.”

The Hurricanes haven’t won a national title since 2001, still haven’t won an Atlantic Coast Conference championship since joining the league in 2004 and have just one 10-win season in the last 16 years. Going 6-7 last season and losing to FIU last November as part of a three-game free fall to end the season left a long-restless fan base absolutely incensed.

Diaz, a Miami native, knows how they feel.

“As a native and having grown up here, I get it better than anybody,” Diaz said. “I know what the standard is that people wanted to see and how we let that down. No one gets that more than I do. So there can be no amount of screaming that’s not already happening internally. But the advantage that I have is I have a chance to solve it, right? I have a chance to try to fix the issues.”

Roche had 49 tackles and 13 sacks last season for Temple. He ranked No. 5 nationally in sacks per game, three spots behind Miami’s Gregory Rousseau, who was No. 2 in the country at 1.19 sacks per game in his redshirt freshman season.

And Lashlee is joining the Hurricanes after two seasons of running a high-tempo offense at SMU, helping the Mustangs average 42.1 points per game this season, seventh-best in the country.

“The model of the culture here at the University of Miami has been set long before me. It’s our responsibility to make sure we get the people on the staff, the people in the program that understand that and want to work towards that.”

Rui Hachimura pays tribute to Kobe and Gianna Bryant with No. 28
USFL signee Lemonier, ex-Lions LB, dies at 25
Reed uses binoculars to ID ball stuck in tree
Hall of Famer Hull, the Golden Jet, dies at 84
‘You only fight him because you have to’: Why nobody wants to get into the ring with light heavyweight champion Artur Beterbiev